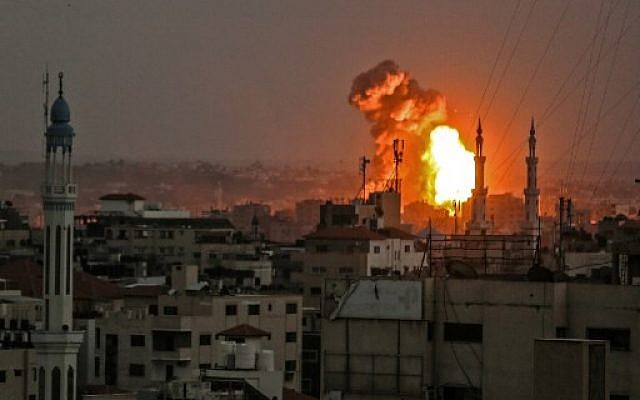 Two Palestinians were killed and seven others were injured in Gaza on Saturday as Israeli aircraft launched two raids on the northern Gaza Strip, according to the Palestinian health authorities, while warning sirens sounded in the Israeli towns surrounding the strip.

The Israeli raids targeted the towns of Beit Hanoun and Beit Lahia in the northern Gaza Strip. Israeli artillery also shelled a post observatory site for the Palestinian movements east of Khan Yunis.

The raids targeted rocket launchers from the Gaza Strip, adding that about 50 rockets were fired at Israeli targets from Gaza, the Israeli army said.

Israeli forces announced that Palestinians have launched more than 50 missiles during 30 minutes, reaching the south of Israel. The Israeli Iron Dome intercepted some of the missiles, while some of them were able to penetrate and fall on different sites, leaving explosions.

“A 15-year-old teenager was slightly injured while attempting to reach shelter in Sderot and two further Israelis were treated for shock,” according to Israeli media.

The Gaza Strip is witnessing a state of alert following the death of four Palestinians and the injury of 51 others on Friday night, as a result of the Israeli army shelling, and attacks on demonstrators participating in the Great Return Marches on the border of the Gaza Strip.

“The resistance is always ready to respond to the crimes of the occupation,” the Hamas spokesperson in Gaza said.

Also the Islamic Jihad movement issued a statement, saying “We are committed to protecting our people and to deter Israel at all costs and under all circumstances.”