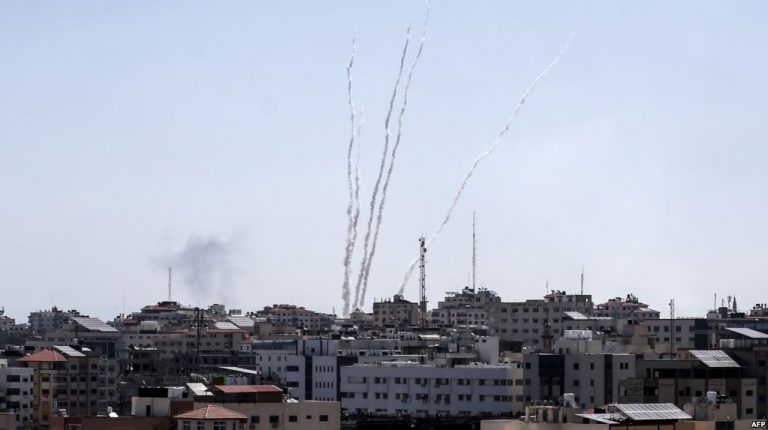 Two Palestinians were killed by Israeli aircrafts shelling of the Gaza Strip during the third day of fighting, bringing the total number of fatalities to 14 including an infant and her pregnant mother. Meanwhile, a rocket fired from the strip killed an Israeli civilian on Sunday.

Earlier, the spokesperson for the Palestinian Ministry of Health, Ashraf Al Qudra, said that the death toll of Palestinians in Gaza due to the continuous Israeli shelling reached 7 deaths and 47 injuries.

The Israeli army said that it struck Gaza in retaliation for the firing of about 500 rockets from the strip into Israel. The Palestinian missiles killed 3 Israelis and wounded dozens according to Israeli media.

On Saturday, the Israeli air strikes targeted the towns of Beit Hanoun and Beit Lahia in the northern Gaza Strip. Israeli artillery also shelled a post observatory site for the Palestinian movements east of Khan Yunis.

The Israeli forces announced that Palestinians have launched about 200 missiles into south Israel. The Israeli Iron Dome intercepted some of the missiles, while some of them were able to penetrate and fall on different sites, leaving explosions.

Moreover, Israeli aircrafts destroyed a building in the centre of the Gaza Strip, including the office of the Anadolu Agency–a move which was strongly condemned by Turkish President Recep Tayyip Erdogan.

The Israeli fighter jets targeted the building of 7 floors with at least five missiles, causing the destruction of the entire building, without causing injuries among the agency’s staff.

Palestinian resistance movements in Gaza have threatened a “broader response” to Israel if they continue their raid against the Gaza Strip.

In the meantime, the European Union called for an “immediate halt” to the firing of rockets from Gaza into Israel.

The army said in an official statement that the Iron Dome anti-missile system “dropped dozens of shells.”

The joint military chamber of the Palestinian movements in Gaza launched dozens of rockets against Israel as a response to Israel’s targeting of peaceful demonstrators in the Great Return Marches on Friday.

Moreover, Israeli Prime Minister Benjamin Netanyahu said on Sunday that he has ordered his forces to continue shelling the militants in Gaza.

A spokesperson for the Israeli army, Jonathan Conricus, said that the 7th brigade had been deployed to the border with Gaza on standby for offensive mission.

“An armoured brigade is ready for various contingencies but earmarked for an offensive mission being by definition a mission that goes inside enemy terrain,” Conricus added.