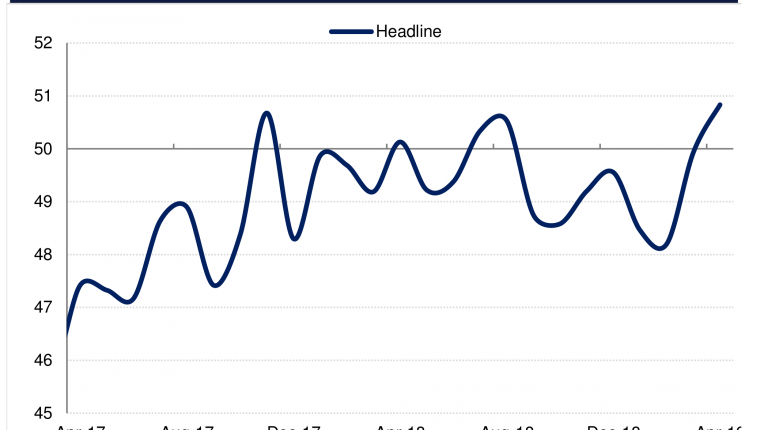 Egypt’s non-oil private sector expanded at the fastest pace since August 2015 in April, as the Emirates National Bank of Dubai (NBD) Purchasing Managers’ Index hit 50.8, marking the first time since August 2018, the bank revealed on Sunday.

In August 2018, the index has breached the neutral 50.0 level which delineates contraction and expansion; the private sector has struggled to expand as it has borne the brunt of the ongoing economic reform efforts in Egypt which began in late 2016.

According to the issued report, the improvement from the first quarter – the PMI index averaged just 48.9 over January to March – was broad-based, with most of the index’s subcomponents returning positive 50-plus readings.

Significantly, output was positive for the first time in 18 months as firms noticed stronger demand, and a positive reading for new orders for the second month in a row bodes well for this continuing over subsequent readings.

However, the report indicates that this uptick in new orders appears to be driven by domestic demand still, as new export orders remained in negative territory. Firms appear to be shoring up domestic demand by price discounting – output prices dipped back below 50, the third time this year they have declined.

Furthermore, NBD believes that with input prices increasing at a faster rate than seen in March, firms’ margins will be squeezed by ongoing price discounting. Nevertheless, they appear to be more confident with regards future conditions as more respondents expect output to be greater in 12 months’ time than they did in March, citing new projects and an improving tourism sector.

“This greater optimism is reflected in their hiring, as employment returned a reading above 50.0 – albeit marginally – for the first time since 2015,” the report concludes.

Egyptian economy is stabilising after bottoming out in Q4 2016: Emirates NBD