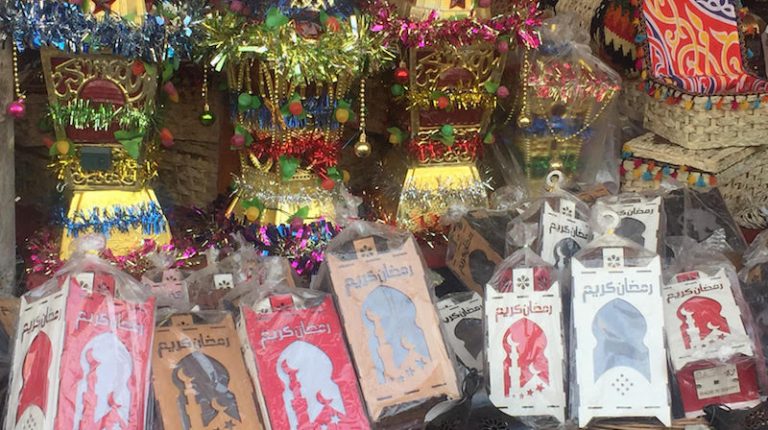 As usual, every year, Egyptian Muslims have geared up to the holy month of Ramadan by hanging up coloured lanterns (known in Arabic as Fanoos) and traditional decorations, as well as other long-established customs despite the price hike of lanterns and difficult economic conditions.

Across the country, many streets in urban and rural areas have been decorated by different shapes, sizes, and kinds of folk lanterns. However, more streets were devoid of this tradition.

Egyptians are not the only people who celebrate Ramadan with lanterns, many other Muslim countries adopt the tradition. The lantern’s origin went back to Fatimid era in Egypt, according to historical narratives. 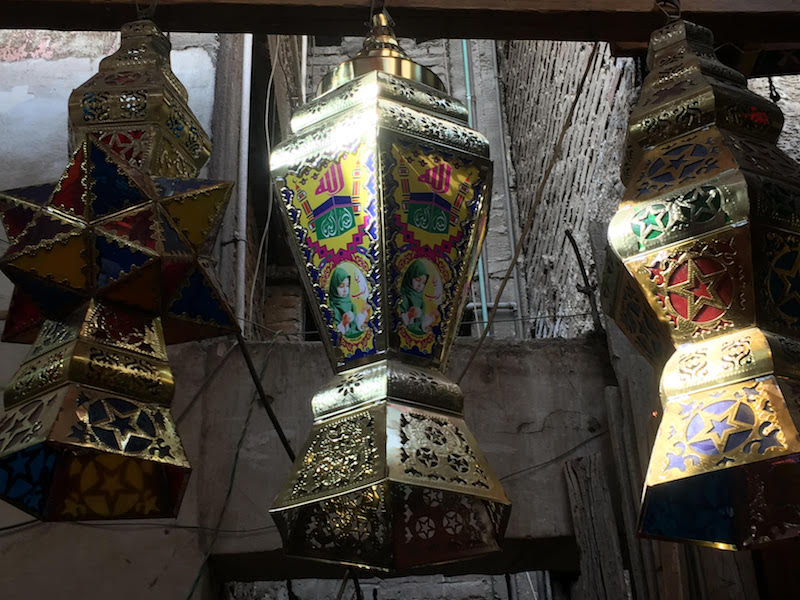 It was first connected with Ramadan when Caliph Al-Muizz Lidinillah Fatimid arrived in Cairo during the holy month. In order to welcome him, Egyptians turned to streets holding decorated colourful lanterns to light the roads. The lanterns remained lighting the road till the month ended. Since then, it became a symbol of Ramadan.

Meanwhile, Ramadan has become also a symbol of warm family and friend gatherings who usually prepare themselves for fasting for a month as well as evening prayers (Taraweeh), performed following the evening Isha prayer.

Inside Egypt, many workshops are devoted to making Ramadan lanterns. One of Cairo’s most known district of making lanterns is Al-Sayeda Zeinab folkloric neighbourhood.

Just in front of the historic mosque which gave the neighbourhood its name, there is a long street which has been long known as a main local market for those seeking different kinds, sizes, and shapes of lanterns as well as other decorations. Lantern merchants set up large vendor tents to sell their products there.

Over the years, the shape of traditional Fanoos has barely changed. lantern makers usually begin factoring the pieces almost a year before Ramadan. Men mostly dominated the business, but there are also women who are involved either in making lanterns or in selling them.

Essam Mohamed, 44, is a lantern merchant who inherited the profession from his parents. “All lanterns have been made by Egyptians. We deal with different workshops, and we also deal directly with lanterns makers,” he told Daily News Egypt.

“It is a tradition. No one can start Ramadan without getting a new Fanoos. No way,” Mohamed argued with a smile.

Regarding the Chinese lanterns which were supposed to be banned from the Egyptian market in recent years, Mohamed said he still sells them, as they are imported now as children’s toys. “It is almost vanishing from the market anyway. People returned to buy their folkloric lanterns.”

In 2015, the ministry of trade and industry issued a decree No 232 to ban importing products and goods which have a folkloric artistic nature, called “National Folklore.” This includes products made of ceramics, jewellery, metal, and wood. Ramadan lanterns are considered one of those products.

“There are wooden and metal lanterns as well as other kinds. The prices of the wooden lanterns start from EGP 10 to 120.” 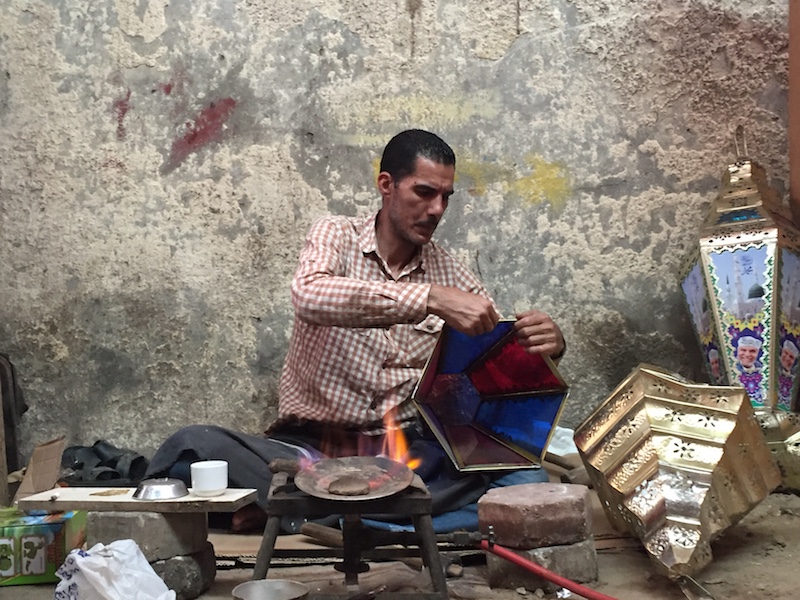 However, the metal lantern’s price could reach EGP 160 and more, Mohamed revealed. He argued that workshops increase the prices of lanterns, not the merchants.

Despite their high prices, he affirmed he has his customers who keep buying from him every year from different social classes.

Moreover, Mohamed revealed that he passed on the passion of his profession into his daughters’ hearts, as he wishes they would continue his path afterwards.

It is my livelihood

Inside Mohamed’s vendor tent, a forty-year-old man settled down aside to finish creating a Fanoos. “I was only six years old when I started learning this craft. I inherited it from my father and grandfather,” Yasser Ahmed told DNE.

“By the time, I have fallen in love with it. I am proud of what I do because it is my livelihood,” Ahmed voiced.

Ahmed revealed that this is his only profession–manufacturing Ramadan lanterns. “We have been working all year. Thankfully, the income is moderate and satisfying.”

Ahmed shares the profession with his brother, father, and uncles. He plans to teach the craft to his son.

However, he refused to teach his daughter the profession. “I do not mind teaching her and even my wife, it will be their honour to do what I do,” Ahmed said, noting however, that he does not want them to face the profession’s struggles. 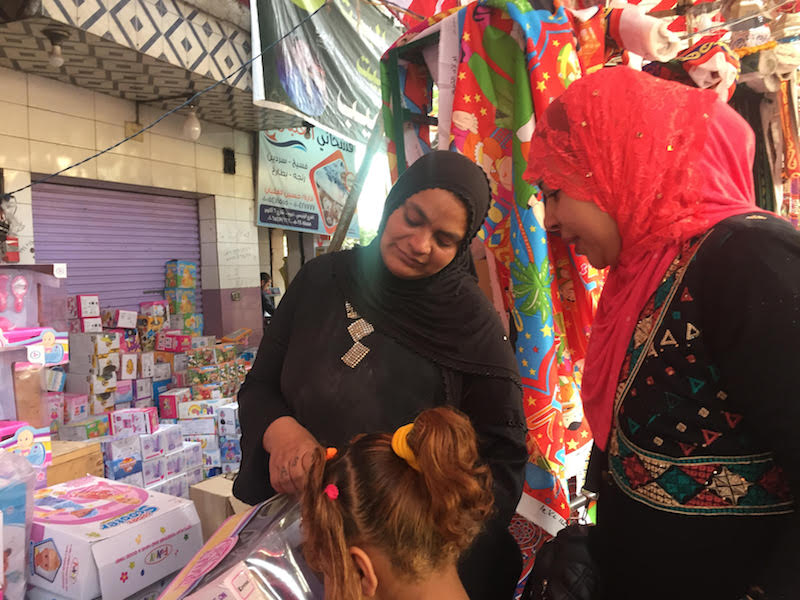 Next to Mohamed’s tent, Hamada Anwar, a thirty-year-old merchant, stands to sell lanterns to his customers. Most of them were women. “I do not make lanterns; I only sell them.”

Anwar, who has started this profession 18 years ago, revealed that workshops try every year to create new shapes of lanterns to attract more customers.

“The prices of metal lanterns range from EGP 100 to 300. However, sometimes it depends on the customers. We often reduce the prices to satisfy them,” Anwar said.

Anwar revealed that they keep selling until 27 Ramadan, noting that the two weeks ahead of the holy month are the high season.

No difference between men and women

A cheerful 30-year-old merchant asked to be introduced by Om Essam, said that she worked with her mother- in-law. “Before I got married (16-years-old), I started working,” Om Essam told DNE.

“I do not know how to make lanterns, but I could perfectly distinguish the good one from the bad one based on my experience,” Om Essam bragged.

“There is no difference between men and women. We share financial responsibilities together. Most times women bear additional burdens,” she said.

Om Essam is a mother of four–three sons and a daughter. She would never let her daughter work in the same field, as she would only teach her boys the profession. Income is not enough

Ramadan Qatch, a 21-year-old salesman, who is named after the holy month, works in other fields so that he can provide for his family.

Qatch started working in lantern trading more than 10 years ago. However, he said that the wage he usually receives from it has never been enough. “I might work for two weeks and get only EGP 500,” Qatch revealed.

He noted that some lanterns are so expensive to the extent that some customers could not buy them due to their harsh economic conditions. “I sometimes wish I could pay for them. Unfortunately, I cannot.”

Qatch noted that large lantern prices could reach EGP 600. He said that unprivileged people often choose small lanterns of only EGP 35 or 65.

“If I had a tent or a shop, I would give underprivileged people lanterns without money to cheer them up, because these people do not even have enough money to feed their families nor to buy them lanterns,” Qatch concluded.