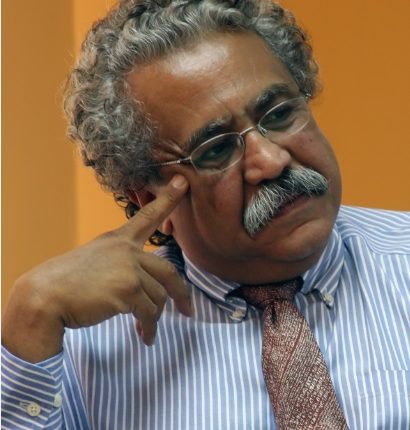 Prominent Egyptian Journalist Hani Shukrallah, passed away on Sunday morning in his home at the age of 69, according to Al-Ahram newspaper.

Shukrallah is Ahram Online’s founder, and has served as its editor-in-chief for two years. He was born in Egypt in 1950 and studied political science. He also worked as editor-in-chief at Al-Ahram Weekly. In his column ‘Reflections’, he wrote about the Egyptian state and political society, political Islam, the Palestinian-Israeli conflict, the war on terror, and Iraq.

He is a member of the Egyptian Organisation for Human Rights (EOHR), the NGO “Arabs Against Discrimination”, and the Centre for Arab and African Research.

During 2008 and 2009 he was founding co-chief editor of the Egyptian daily Al-Shorouk, for which he wrote a weekly column. He is also the former executive director of the Cairo-based Heikal Foundation for Arab Journalism and former managing editor and chief editor of the English language al-Ahram Weekly (1991-2005).

He wrote a regular column for al-Ahram Weekly for more than 10 years, and has also written for the Guardian, Outlook, (India), al-Hayat (London), and the Journal of Palestine Studies. Shukrallah served as a consultant with the al-Ahram Center for Political and Strategic Studies, one of the leading think tanks in the Middle East (2005-2008), and was a visiting lecturer at the University of California, Berkeley (spring semester 2006). Shukrallah is author of Egypt, the Arabs and the World: Reflections at the Turn of the Twenty-first Century (AUC Press, 2011).