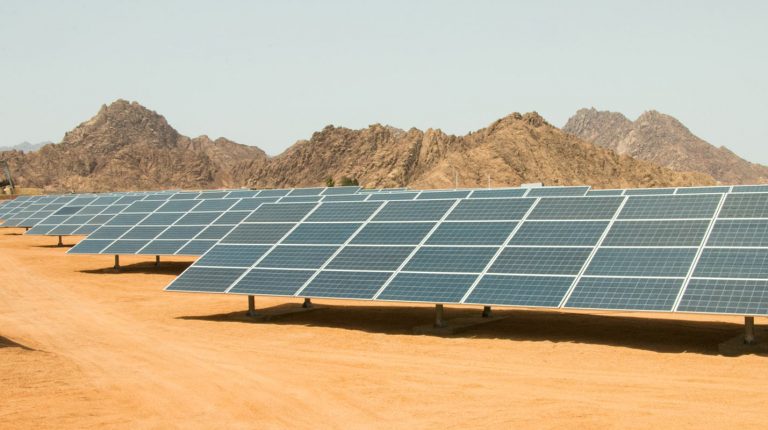 Egypt is currently working on implementing an integrated programme for the development of Sinai. The programme is given priority by the political leadership and the government, and supported by Arab funds and international financial institutions for Sinai’s regional strategic importance.

Schneider Electric completed the implementation of the first phase of South Sinai’s solar power plant with a capacity of 5MW at a cost of $5m in the feed-in tariff mechanism, in cooperation with Al Tawakol Electrical Company (Gila) and Petro Energy. The company aims to continue the second phase and increase capacity by 35MW to reach 40MW in the coming period.

Daily News Egypt conducted a tour of the 85,000 square metre solar power plant in the Safari land in Sharm El-Sheikh, which is the first plant in the national programme to develop Sinai and turn the city of Sharm El-Sheikh into an eco-friendly city.

“The project is part of the first stage of the feed-in tariff, which includes the production and sale of energy to the Egyptian Electricity Transmission Company. Schneider Electric signed a memorandum of understanding (MoU) with South Sinai to set up a 40MW solar power plant,” said Sherif Abdel Fattah, vice chairperson of Schneider Electric. The MoU was signed in the presence of Presidents Abdel Fattah El Sisi and Francois Hollande during his visit to Egypt in 2016.

Abdel Fattah explained that the terms of the agreement include the selection of a second party for the implementation of contracting work, especially as the company’s role is in the supply of products, and it must contract with a company accredited by the New and Renewable Energy Authority, hence the contract will be with both companies.

The negotiations for the land took a long time, he said. However, after the intervention of Khaled Fouda, governor of South Sinai, the land was allocated in return for 2% of the annual production. The company is working to boost capacity to 40MW.

The establishment of the solar power station in Sharm El-Sheikh lasted 77 days, with 15,300 panels installed of 325MW per panel. The project produces 9,9GW/h annually and contributes to the reduction of carbon emissions by 5,000 tonnes per year.

Walid Sheta, chairperson of Schneider Electric Egypt, said that his company is committed to supporting Egypt’s renewable energy production strategy until 2022 based on the recommendations of the Paris Climate Agreement. Egypt for Schneider Electric is number one in Africa because of the tougher conditions in other countries. It is considered the equilibrium of the region and the most important country and represents the largest market and industrial base.

Sheta added that the measures taken by the state to attract investment have helped investors to develop their confidence in the Egyptian economy and the management of Schneider Electric. The company has undertaken a number of commitments to expand the plant in Egypt, where 30% of the production is exported to the Arab Mashreq and Africa.

Mohamed Mamdouh Abbas, board member of Intro Solar, said that the 5MW solar power station in Sharm El-Sheikh is the first step toward building a huge and integrated system in the new and renewable energy sector and transforming Sharm El-Sheikh into a green city.

Abbas explained that the company is seeking to expand its local and regional portfolio to participate in the implementation of projects to produce electricity from renewable sources, as the focus of Intro Energy is not only aimed at the diversification of projects and expansion in the services and utilities, but rather to contribute to the strengthening and diversification of the electrical grid.

During the tour, Daily News Egypt met with Yahia Abdel Rahim, director of the project of the solar station in Sharm El-Sheikh at Madkour Engineering Projects Company, the project’s general contractor. He explained that the company is responsible for installing the equipment and implementation of the project and civil works on the site.

Abdel Rahim elaborated that the biggest challenges to the implementation of the solar power plant with a capacity of 5MW is the location of the land and the required time, where it was bringing many raw materials from Cairo or outside Sinai which was supposed to take three months, but it was established in less than two and a half months.

“The land allocated for the project is rocky and part of it is fossilised sand. The consultant in charge of the project asked for land paving but this procedure would have taken six months,” he said, adding that the company maintained quality.

Furthermore, he revealed the installation of 26 surveillance cameras inside and outside the project to cover the ground areas and the main gate, in order to monitor the station around the clock and avoid any problems which may occur.