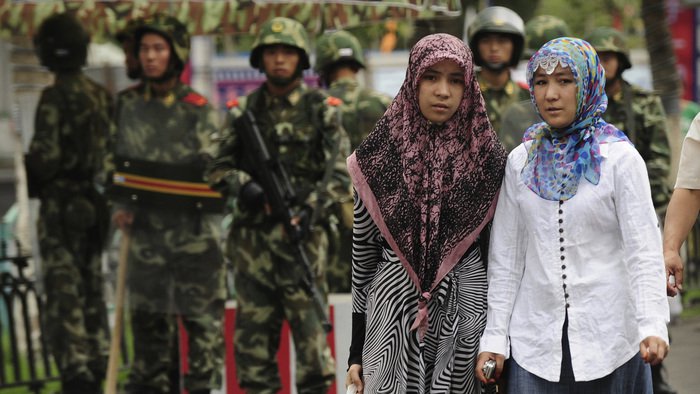 The United States accused China earlier this week of putting over a million minority Muslims in “concentration camps,” in some of the strongest US condemnation to date of what it calls Beijing’s mass detention of mostly Muslim Uighur minority and other Muslim groups.

The comments by Randall Schriver, who leads the Asia policy at the US Defence Department, are likely to increase tension with Beijing, which is sensitive to international criticism and describes the sites as vocational education training centres aimed to stem the threat of Islamic extremism, Reuters said.
Chinese authorities defended their ongoing crackdown in the western region of Xinjiang on Monday, claiming they had arrested nearly 13,000 terrorists and broke up hundreds of “terrorist gangs” since 2014.

The policy faces growing international criticism of what the United Nations describes as internment camps, apparently holding more than one million ethnic Uighurs and other Muslims.

The state council, China’s cabinet, said the measures “strike the right balance between compassion and severity” in stemming the threat of Islamist militancy and called the camps vocational training centres.

The report said 458 people had died in 30 attacks since 1990, but gave little evidence of what crimes had occurred.

A relatively small number of people — such as ringleaders — received strict punishment, the document said, while those influenced by extremism were rehabilitated.

“Counter-terrorism is a political excuse to suppress the Uighurs. The real aim of the so-called de-radicalisation is to eliminate faith and thoroughly carry out Sinification,” he said.

In 2017, Raxit told Radio Free Asia that Uighurs were ordered to hand in “any Islam related item” and authorities confiscated all Korans printed after 2012.

In August 2018, the UN Committee on the Elimination of Racial Discrimination began a two-day annual review of human rights in China by voicing “deep concern” over the situation facing Muslim Uighurs in the country.

Speaking in Geneva, the committee’s vice-chairperson, Gay McDougall, said credible reports suggest that China’s approach to combating religious extremism “has changed the Uighur autonomous region into something that resembles a massive internment camp that is shrouded in secrecy, a sort of no rights zone.”

She also claimed that as many as two million more Uighurs in China’s Xinjiang autonomous region were being forced into “political camps for indoctrination.”

Beijing has spent decades trying to suppress independence sentiments in the region, fuelled in part by an influx of China’s Han majority.

International consternation has grown over what Beijing has called “vocational education centres” since satellite imagery revealed the camps springing up over the past two years on a massive scale.

Chinese Officials have said the rights groups’ estimate of one million detainees is exaggerated.

The EU will hold talks with China over its relationship next month.

Many of Xinjiang’s history archives are closed to foreigners and most locals.

The tool profiles people by labelling “completely lawful” behaviour as suspicious, in order to help authorities detain the religious minority, the report said. “Our research shows, for the first time, that Xinjiang police are using illegally gathered information about people’s completely lawful behaviour and using it against them,” said Maya Wang, HRW’s senior researcher on China.

“The Chinese government is monitoring every aspect of people’s lives in Xinjiang, picking out those it mistrusts, and subjecting them to extra scrutiny.”

China rejects the accusations of mistreatment and initially denied the existence of the facilities, but it has changed its stance as satellite imagery and released government documents made that position impossible to maintain.

An editorial in the nationalist tabloid The Global Times warned foreign governments “not to meddle” in Xinjiang’s affairs. “Obviously vocational education is a periodic and temporary plan aimed at eradicating extremism,” it said, adding that criticism was “just messing up the whole thing and creating a narrative against China.”

Amnesty International said that open or even private displays of religious affiliation – including growing an “abnormal” beard, wearing a veil or headscarf, regular prayer, fasting or avoidance of alcohol – are categorised as “signs of extremism” in some locations.

“Any of these can land you in one of Xinjiang’s internment camps, which the government calls ‘transformation-through-education centres’ and are reportedly arbitrarily detaining up to one million people,” Amnesty added.

Things took a turn for the worse in the summer of 2009. Inter-ethnic violence in Urumqi, Xinjiang’s capital, left nearly 200 dead. In response, a much stronger military and security presence was deployed throughout Xinjiang, stoking even more tension.

According to a regulation passed in 2017, people can be labelled “extremist” for refusing to watch public radio and TV programmes, wearing burqas, or having an “abnormal” beard.

In April 2017, the government reportedly published a list of prohibited names, most of which were Islamic in origin, and required all children under 16 with these names to change them.

The governor of Xinjiang in March was quoted by Reuters directly dismissing comparisons to concentration camps, saying they were “the same as boarding schools.”

Last year the broadcaster Radio Free Asia (RFA) reported that during Ramadan, the authorities forced restaurants to stay open and restricted access to mosques. Numerous counties in Xinjiang have posted notices on their websites in recent years, stating that students and communist party members were not permitted to fast in Ramadan in line with their religious beliefs.

The Organisation of Islamic Cooperation (OIC) is an international organisation made up of 57 Muslim-majority countries. Its Independent Permanent Human Rights Commission (IPHRC) aims to protect and promote human rights in the Muslim world. They should urge the Chinese authorities to respect and ensure the rights of ethnic minorities in Xinjiang to freedom of religion and stop the persecution and their prosecution for solely peacefully exercising their human rights.