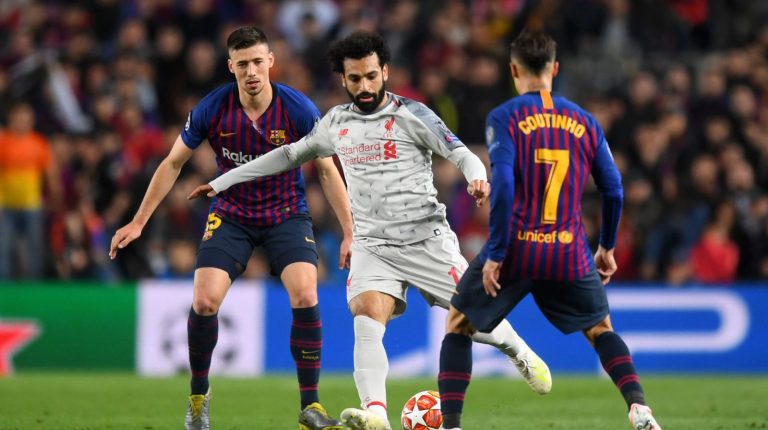 Liverpool, where Egyptian star footballer Mohamed Salah plays, will face Barcelona at 9pm tonight on the Anfield Stadium in the second leg of the semi-finals of the Champions League.

The first leg had ended 0-3 to FC Barcelona.

Barcelona’s Luis Suarez scored in the 26 minute mark, then Lionel Messi in the 75th and 82th minutes.

Barcelona came to this game after they managed to overcome the obstacle of Manchester United by winning one goal to one in the first leg, then 3-0 in the second leg, while Liverpool arrived at the expense of Porto of Portugal, winning two goals to none then 4-1 in the second leg.

Frenchman Ousmane Dembélé is absent from the Barcelona list, where the Catalan team is dedicated to focusing on the Champions League, having retained the Spanish League title for the second consecutive year and the 26th in the club’s history.

On the other side, the title of the Premier League remains on fire between Liverpool and Manchester City with one game left to settle the champion.

The Liverpool attack recently suffered a decline in their level, and this was evident in the last game in the English League team against Newcastle United, which ended with the victory of the Reds with difficulty– three goals to two. Egyptian Pharaoh Mohamed Salah scored the second goal for his team before leaving the pitch injured.

The last encounter in the final round of the league competition witnessed the injury of the Egyptian Pharaoh Mohamed Salah, who exited with an injury he suffered in the 73rd minute of the game after a violent encounter with Newcastle’s goalkeeper, who hit Salah’s head with his knees.

Some reports confirm Salah’s participation in the game today, and that the injury he suffered is slight.

Football fans are waiting for a special match between the Egyptian Pharaoh, Mohamed Salah, and Argentinean star Lionel Messi, who had previously met when Salah was playing for Rome, while Messi led Barcelona to face Liverpool in two games.

The first leg is the first for Barca to win over Liverpool at Camp Nou, where Barcelona could not beat the Reds in two visits of the English team in the Champions League.

The Reds were able to beat Barcelona 2-1 before falling in the second leg with one goal at the Anfield in the last game between the two teams in the round of 16 in 2007.

In 2001, the two teams met for the first time in the Champions League, in the group stage, where Barcelona scored three goals to win against Liverpool, and Liverpool drew 0-0 at Camp Nou.

On the other hand, the two teams are already in the semi-finals of the European Championship on two occasions. Liverpool has the upper hand in them, where the Reds managed to reach the final at the expense of the Catalan team in 1976 and 2001.

'Why not both?' Jürgen Klopp eyes double with Liverpool