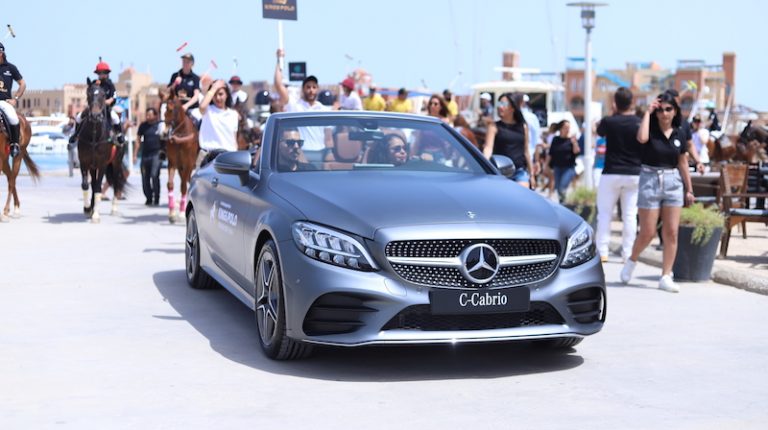 Four teams of local and international champions competed in the competition. The Mangroovy team won the first place, followed by King Polo team, Afreximbank team in third, and Mercedes-Benz in fourth.

The organisers held a parade of the participants on 26 April in the resort city. It was led by Mercedes C-Cabriolet, followed by horses, teams, and drummers in a joyous scene that lasted for two hours. C-Cabriolet’s new-look combines emotionality with intelligence. The vehicle’s appearance is defined in particular by its front and tail end and the design of the headlamps and tail lights. The front design exudes sportiness and lifestyle at first glance. Powerful styling elements such as the new bumper and the standard-fit diamond radiator grille lend the two-door C-Class models an individual character. The standard-fit LED High Performance headlamps are now standard and in their new design they have an especially distinctive appearance. Due to the autonomous design with the dynamic details and standard-fit two-pipe exhaust system (petrol engines) the rear view appears broad and agile.

The sporty interior with its autonomous integral-look seats is characterised by further-enhanced perceived quality and flowing shapes and the facelift takes it into the digital era. The centre console is characterised by an elegant flowing trim element – optionally with new materials: open-pore brown walnut or open-pore anthracite oak.

The C-Class has a new display concept which includes an optional, fully-digital instrument cluster. The optional head-up display is now adjustable over an even wider range. The Keyless Go starting function is standard. The start/stop button comes in a new turbine-look design. The vehicle key also features a new design.

The tournament included an Amr Diab concert on 26 April and another concert for elite world artists on 27 April, including Romanian singer Inna. The concert was also sponsored by Mercedes-Benz Egypt.

During the event Mercedes-Benz revealed its new model CLS for the first time in Egypt before introducing it officially to the local market.

In 2004, Mercedes-Benz created a new vehicle segment that for the first time combined the elegance and dynamism of a coupé with the comfort and functionality of a saloon. With the third generation of the CLS, Mercedes-Benz is now building more strongly than ever on the aura and unique character of this trendsetting model.: the new model has pure CLS genes with its arching waistline, flat side window lines, and low greenhouse. At the same time, it is another example of the logical evolution of the Sensual Purity design idiom: sharp edges and lines have been significantly reduced. It blends seamlessly into the current Mercedes-Benz coupé family with numerous design features. Its cd value of 0.26 is positive proof of outstanding aerodynamics. 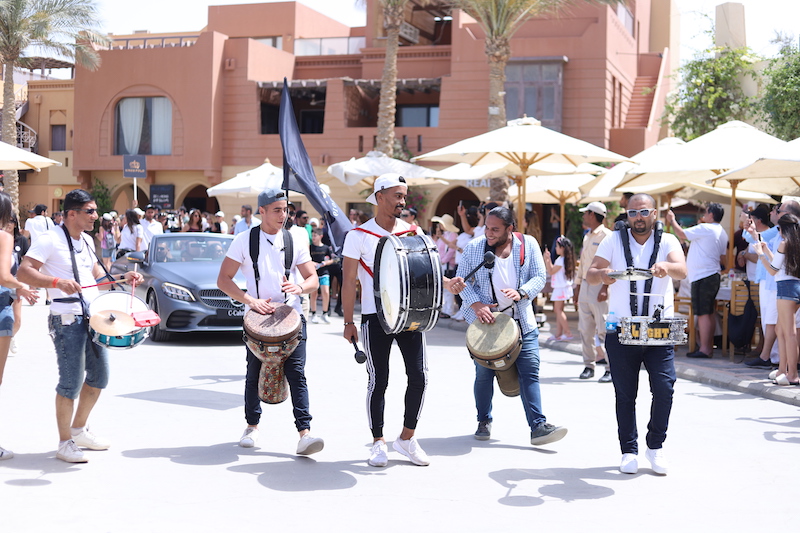 The new CLS pioneers the new design idiom of Mercedes-Benz, which is recognisable by its clear contours and reduced lines. Its character is marked by a grille contour that widens towards the base and a forward-slanting front section. Other features include wide, low-set headlamps and two-section tail lights. At the same time, the design reflects the timeless aura of the first CLS, which founded a new segment and quickly became a design icon. All CLS models are equipped with new engines: in-line six-cylinder and in-line four-cylinder units as diesel and petrol versions. Like its predecessors, the new CLS exudes self-assured sportiness in exemplary style: a highly emotive vehicle offering impressive long-distance and acoustic comfort coupled with thrilling, unrivalled technology.

The new CLS generation has many things in common with the new S‑Class, the automotive flagship of the entire industry: the CLS is equipped with the latest generation of driving assistance systems, with route-based driver support provided by the Driving Assistance Package. Active Distance Control DISTRONIC and Active Steering Assist now provide even more comfortable support for the driver to keep a safe distance and steer. The speed is now adjusted automatically ahead of bends or junctions.

Thanks to improved camera and radar systems, the new CLS also has an even better view of the surrounding traffic. For the first time it also makes use of map and navigation data to calculate driving behaviour. In stop & go traffic on motorways and similar roads, stops of up to 30 seconds are now possible, during which time the CLS starts moving again automatically and follows the traffic.

In the fully digital cockpit, the driver is able to freely configure the information content according to need and the driving situation. Three different styles can be selected depending on preference, mood, or to suit the interior appointments. The Classic and Sport styles have a basic structure with two tubes, while the Progressive style surprises and polarises with a structure having a central, tube-shaped instrument.

The ambience lighting is individually adjustable in 64 colours, and also includes the air vents. The seats were designed exclusively for this model series. Depending on the interior, they feature high-quality piping or transverse seams. The outer seats in the rear have the same appearance as the front seats, creating a sporty single-seat impression, although the CLS Coupé is in fact a five-seater for the first time. 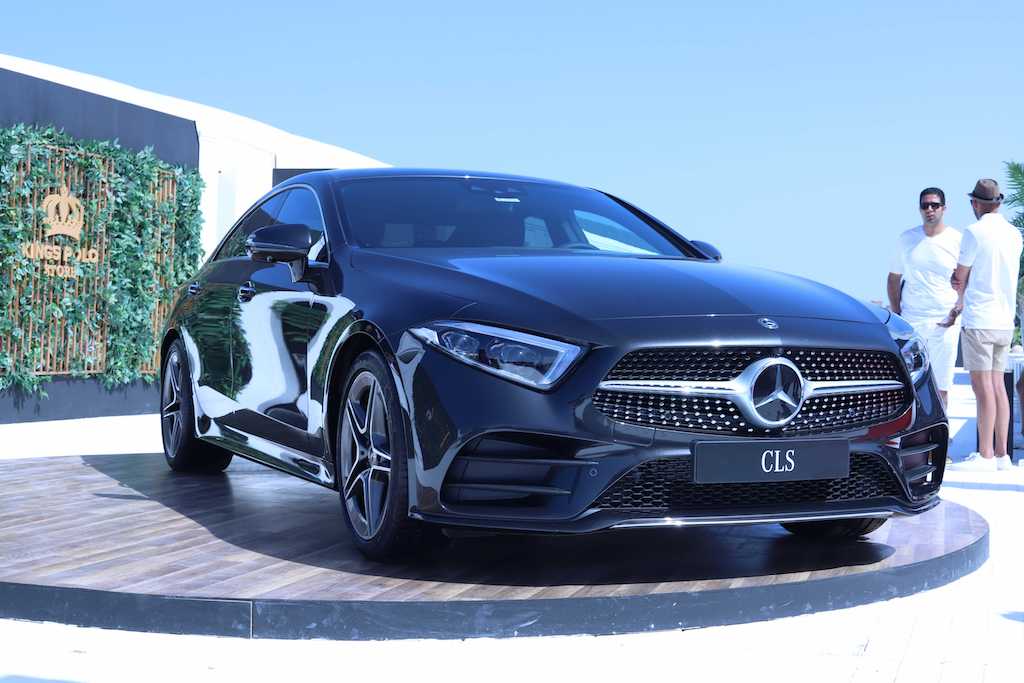 The GLC introduces freedom in its most beautiful form since its launch in the fall of 2015. Like its predecessors, it combines the four-wheel drive exceptional driving qualities with off-road comfort, practicality and comfort. The latest generation adds more advanced technology, design, connectivity and entertainment.

And so the GLC once again shows how can the car combine the brand’s distinctive safety, elegance and intelligent adaptability to achieve great success, the result is a SUV that sets new standards, on paved roads as well as in rugged terrain.

Radiate effortless superiority and power without appearing pushy. Stipulate the direction with pride and confidence, whilst knowing when to hold back. This is the fine art of contemporary luxury. And this is the design idiom of the GLC. The upright, highly expressive front and the three-dimensionally configured radiator grille lend it a progressive presence. On the side of the vehicle precise feature lines and muscular surfaces produce an inimitably Sensual Purity, a hallmark of the Mercedes-Benz Design.

The optional air suspension with continuous adjustable damping pampers the occupants using every rule of engineering artistry in the book. Understeering is tangibly reduced for a dynamic driving experience. What’s more, any unevenness in the road surface is almost completely absorbed. Automatic height regulation ensures more stability and less consumption, depending on the current speed. On stony ground or when the car is heavily laden, the vehicle height can also be manually adapted via the level control switch.

The GLC features two models in Egypt: GLC 250 SUV and GLC 300 Coupe. Both use a 2.0L engine of 211hp and a torque of 350NM. The engine is linked to an automatic transmission of 9 gears on all four wheels through 4MATIC enabling the car to move from 0 to 100km/h in 7.3 seconds and reaching a maximum speed of 220km/h at an average fuel consumption of 7.1L per 100km.