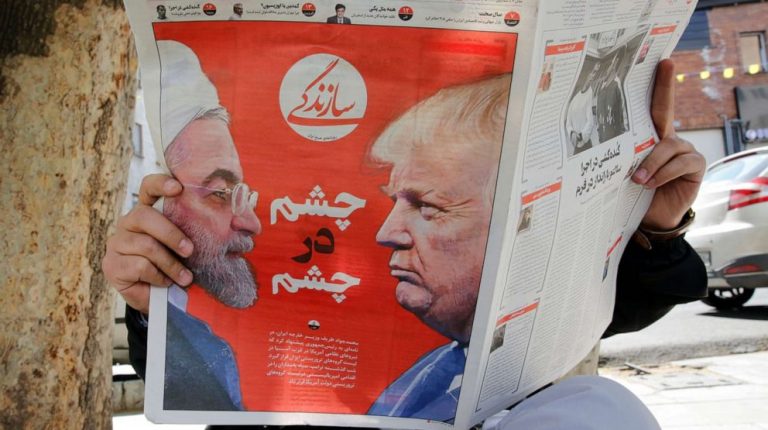 The United States deployed an aircraft carrier and bombers to the Middle East as “a signal to Iran”, National Security Advisor John Bolton said on Sunday.

The announcement comes as tensions between Washington and Tehran are at a high point over Iran’s nuclear programme, with the US increasing sanctions in the past year since president Donald Trump withdrew from the Iran nuclear deal.

The step took place after the Trump administration took the bold step of designating Iran’s Revolutionary Guard as a terrorist group. It was the first time the US had delivered such a designation for a foreign government’s institution.

After years of economic sanctions imposed by the west, as well as years of government mismanagement, Iran faces a real economic crisis. Since President Rouhani took office one and a half years ago, he has been slowly reversing the inflationary policies of his predecessor Mahmoud Ahmadinejad.

Bolton said the deployment of the USS Abraham Lincoln carrier strike group with a bomber task force to the US Central Command region was a response “to a number of troubling and escalatory indications and warnings.”

Trump’s national security adviser said the Lincoln was headed to the Central Command area, which could mean east of the Red Sea and perhaps of the Arabian Sea or the Persian Gulf, where the US navy currently has no stationed aircraft carrier.

Bolton said the White House was sending a “clear and unmistakable” message that any attack against the US and its allies’ interests would be met with “unrelenting force.”

“The United States is not seeking war with the Iranian regime, but we are fully prepared to respond to any attack, whether by proxy, the Islamic Revolutionary Guard Corps (ISGC), or regular Iranian forces,” Bolton said.

Conflicting relations with Iran can be traced to a large extent to 19 August 1953, when both the United Kingdom and the US orchestrated a coup which overthrew Iran’s democratically elected Prime Minister Mohammad Mossadegh.

The IRGC is Iran’s elite military force responsible for protecting the Islamic regime from internal and external threats. A 125,000-man force, it also controls the paramilitary Basij militia, which has about 90,000 active members, and runs the foreign special operations Quds force.

The IRGC was established at the end of Iran’s 1979 Islamic revolution as an elite armed militia whose role was to protect the then embryonic Shiite clerical regime. It also formed an important counterweight to Iran’s conventional military, many of whose leaders were believed to be loyal to the exiled shah.

The White House did not explain the timing of the deployment, but it comes just as an escalation is taking place between Gaza-based Palestinian militants and Israel, during which the two sides have traded a barrage of rocket fire and air strikes in recent days.

US: Iranian navy fires rockets near US warships

Weight of US aid relative to Egyptian GDP has deteriorated: Dcode