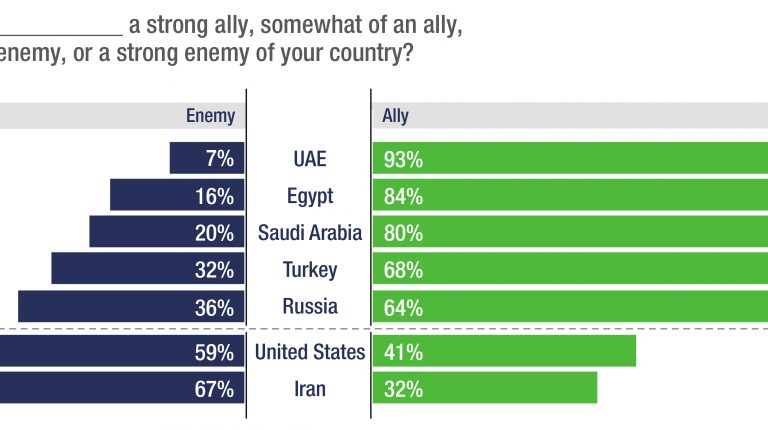 The 2019 ASDA’A BCW Arab Youth Survey disclosed its results on Sunday, providing governments, the private sector, and civil society with insights into the concerns, hopes, and aspirations of Arab youth.

This year survey is the 11th annual ASDA’A BCW Arab Youth Survey, namely “A Call for Reform,” giving an overview of the Arab youth opinions on 10 topics.

The 10 topics that the survey dug into include religion; the government’s role; education; foreign relations; conflicts; model nations; drug use; mental health; e-commerce, and media consumption.

The ASDA’A BCW Arab Youth Survey was launched in 2008, and is considered as the largest survey of its kind of the Middle East.

Daily News Egypt investigated further into the results of the survey and classified them into points.

Regarding religion, the survey found out that 79% of young Arabs believe that the Arab world needs to reform its religious institutions, meanwhile 66% think that religion plays too big of a role in the Middle East.

“Half of young Arabs say religious values are holding the region back,” according to the results of the Arab Youth survey.

At the same time, many say religion is losing its influence, particularly outside the GCC countries.

The rising cost of living, unemployment, and the threat of terrorism are, for the third year in row, considered the top three concerns facing the youth in the Middle East, according to 2019 Arab Youth Survey.

The survey results explained that in 2019, 56% of young Arabs believe that the biggest obstacle is the rising cost of living, while 45% think that the largest obstacle is the unemployment rate, with 26% of youth believing that the threat of terrorism is the vital concern facing youth in the Middle East.

Meanwhile, the survey found that two in three of the young Arabs say their countries are not doing enough to help young families.

Likewise, the majority of Arab youth become more aware that it is the government’s responsibility to provide safety, education, healthcare, energy subsidies, jobs, and housing to all citizens.

Talking in depth about the education file, unfortunately the findings of the survey let on that 78% of young Arabs across the region are concerned about the quality of education they receive in their countries.

Unfortunately, 49% of Arab youth in the MENA region feel their country’s education system does not prepare them for future jobs.

It is time to put an end to regional conflicts

The survey talked in depth about the Syrian civil war and took the opinions of young Arabs on the most likely scenarios, revealing that 73% say that the war should end regardless of whether Bashar Al-Assad stays in power or not, while 26% of them think that the war should not end until the Syrian people can freely elect their leaders.

The survey findings uncovered that young Arabs are drawn to the UAE by job opportunities and salary packages, as well as safety and security.

Digging further into the topic of drug use, unfortunately, the findings disclosed that 57% of young Arabs said that drugs are easy to get in their countries, and drug use is on the rise.

By asking young Arabs about the reasons why young people start using drugs, the results of the survey revealed that Arab youth view peer pressure as the top driver of drug use; many also point to stress relief and boredom.

Regarding the best ways to combat drug use, young Arabs thought that stricter laws, better law enforcement, and education are viewed as the best results.

Mental health illness is a sigma

It further showed that one-third of young Arabs stated that they know someone suffering from mental health issues.

Regrettably, 54% complained about that the quality medical care for mental health issues and that it is difficult to access in their country.

Shamefully, half of Arab youth say there is a stigma around seeking medical care for mental health issues.

The findings of the survey imparted that young Arabs are driving the region’s e-commerce boom.

The results unveiled that the number of young Arabs shopping online has significantly spiked over the past year, stating that in 2019 ,71% of youth stated that they shop online, up from only 53% in 2018.

“Clothing, meals, and electronics are the key drivers of e-commerce among young Arabs,” according to the survey results.

When shopping online, 35% of Arab youth in North Africa stated that they prefer to use Credit/debit/pre-paid cards.

The survey results found out that among Arab youth, social media is more popular and seen as more trustworthy than traditional media.

Over the past five years, social media has become the dominant source for news among Arab youth, while online news portals are now on par with TV.

The findings uncovered the development of the usage and trust of social media throughout the past five years, noting that 80% of young Arabs stated that they get their news from social media in 2019 compared to only 25% in 2015.

The survey findings stated that more young Arabs get their daily news from Facebook or online portals rather than TV news channels.

“Nine in ten young Arabs use at least one of the major social media channels daily,” according to the survey results.