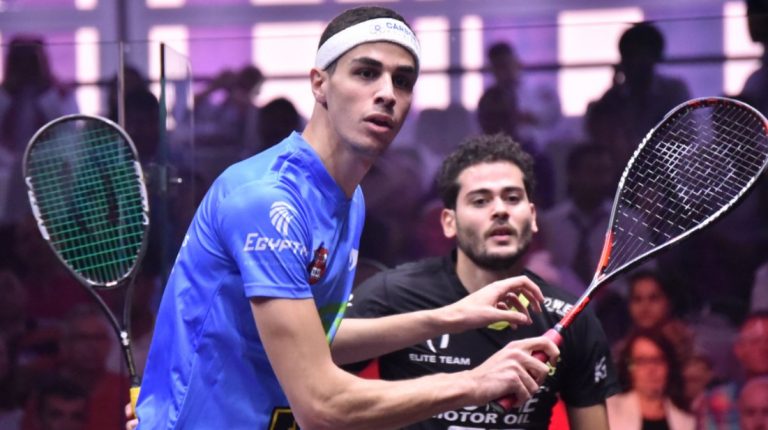 Ali Farag, born 22 April 1992 in Cairo, is an Egyptian professional squash player in the Egyptian national team. He graduated from Harvard University in 2014, where he received a mechanical engineering degree and was one of the best players in the league with only two defeats. As a member of the squash team at Harvard University, he won two titles and helped the team in 2014 obtain its first university title in 17 years. After graduation, Farag became a professional player and climbed the highest international rankings in record time.

He received the best player squash title for April 2015 by the International Professional Squash Association. He is now leading the global ranking and won the international Gouna squash tournament a few days ago, which is one of the largest seven world championships worldwide. Daily News Egypt interviewed Farag, the transcript for which is below, lightly edited for clarity:

What is your comment on the retirement of Ramy Ashour? Did you expect it?

Ramy Ashour’s retirement is a sad day in the history of squash. He has succeeded in moving the game to a better place. He is like Federer in tennis and Mohamed Ali in boxing. We wished he would continue for longer even though we expected his retirement as he did not participate in any championship during the last year, and suffered from an injury in the last three years.

How did you assess the Gouna Squash Championship? What is the difference between it and other international tournaments?

The Gouna Championship is organised at the highest level, by Amr Mansa, the founder of the tournament, and for us, as Egyptians, it is the most important platinum tournaments, because it is held on our land and before artists and businessmen.

What are your ambitions after leading the world ranking?

My ambition is to maintain the first position for as long as possible. I try to deliver the message of squash, and it is an excellent and great game, and I can promote it and send a message that the player can study in the best universities in the world and return to Egypt to become a champion in the game he loves.

What do you think of excluding squash from the Olympics?

This is a purely political matter, and this does not hinder the game. One day, I am sure that the Olympic committee will come to tell us that it wants to enter squash in the Olympic programme.

What is your relationship with the squash union, especially under the union’s policy of caring for young players more than adults?

The federation was very interested in us when we were young players, and we were motivated by sending the top five players to the England Open, and we were travelling in world championships for teams and singles, which is a great incentive for us.

Who do you fear to face?

I played with Kareem Abdul Gawad when we were 9 years old. For me he is always and will forever be the toughest competitor. He is very talented and hard to read. It is always difficult for me to compete with him.

What is the most prominent crisis that can meet any player who starts his life in squash?

The game is very expensive, not cheap, there is a financial obstacle, because it is not available to all people, in addition to the fierce competition, but any player who worked hard to train could reach the top, though it is important to have a good coach.

What is the role of the top players in supporting the youth?

The main reason for Egypt’s squash monopoly is the continuity of generations, because the children put adults as role models for them. When we were young, the adults helped us and did not spare us their experience.

Egypt’s economy to grow by 6.8% annually until 2027: Center for International Development at Harvard University