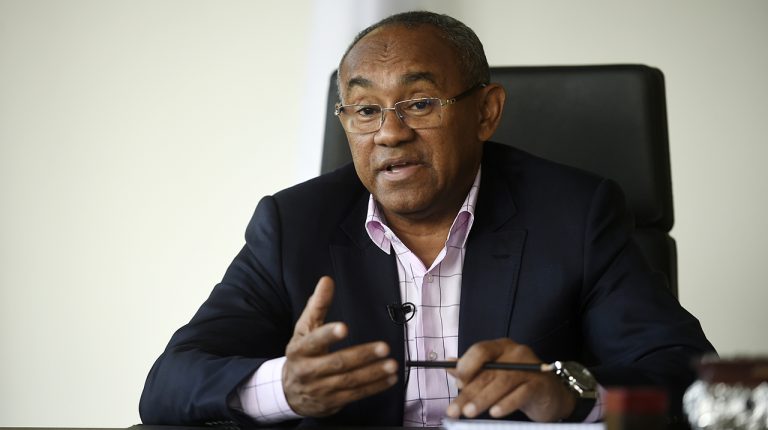 Speaking to Daily News Egypt, the Confederation of African Football (CAF) president, Ahmad Ahmad, criticised those accusing him of corruption and abuse of office, describing them as “rumour makers”. He spoke for the first time about the possibility of moving CAF headquarters from Egypt to Morocco.

Ahmad held a collective press interview with the Egyptian media, which some described as an attempt to address rumours circulated over the past months about the dismissal of former Secretary-General of CAF, Amr Fahmy, and the possibility of relocating the headquarters of CAF.

“My real problem is that I’m a straightforward person and I tell the truth. I will not change my principles after 59 years. God wanted me to be president of CAF,” Ahmad said. “I thought about running for CAF presidency after the Executive Council elections in September 2016. After that, more than one member asked me to run against Issa Hayatou in the presidential elections, who was also born in Madagascar. I won with 32 votes. Europeans attacked me because I withdrew the CAN 2019 hosting rights from Cameroon and gave it to Egypt. Since the first minute I asked Hany Abo Reda (Head of Egyptian Football Association) to check Egypt’s readiness and everyone agreed it was ready,” Ahmad added.

“I had no problem with the former secretary-general, but many in CAF did not like Fahmy. Personally, I wanted his father, Mustafa Fahmi, to be the secretary general, but he worked a lot with Hayatou, and it was impossible. Amr Fahmi studied sports and his father was helping him and give him his experience. But before everyone’s eyes, Amr offended his father and told him he knew nothing. I personally then told Amr he could go anywhere in the world if he cannot control his anger. I warned him more than once before I decided he had to leave,” Ahmad explained. At that time, Ahmad learned that Amr was sick and was going to undergo a surgery. After the surgery, he left his position, according to Ahmad.

Afterwards, Deputy General-Secretary for Administration and Finance, Essadik Alaoui, resigned and was replaced by Moroccan Moaz Hegy. “I wanted Amr Fahmi to continue in his position, but unfortunately, we had reached a dead end,” Ahmad added.

According to Ahmad, Fahmi used to leak secret information about CAF to the press, so it was necessary to dismiss him. “I’m not responsible for the financial issues. According to Article 26 of the CAF legislations, the secretary general is responsible for such issues. I have not signed a single cheque since I took office at CAF. Amr used to handle these issues.” he said.

CAF’s executive office was the one to make the decision to let Amr go, alongside Ahmad.

The story began when Fahmy made corruption accusations against the organisation’s president in a potential blow to FIFA’s efforts to clean up the game after a raft of scandals worldwide. Fahmy accused Ahmad of bribes and misuse of hundreds of thousands of dollars.

The document, sent on 31 March by Fahmy to a FIFA investigations committee, accused Ahmad of ordering his secretary-general to pay $20,000 in bribes into accounts of African football association presidents. They included Cape Verde and Tanzania.

Furthermore, it accused him of violating statutes to increase Moroccan representation within the organisation, and over-spending more than $400,000 of CAF money on cars in Egypt and Madagascar, where a satellite office has been set up for him.

Sabine Seillier, president of Tactical Steel, said her company won the contract with CAF because it was the only group that could guarantee delivery of the equipment sought in a tight timeframe of three weeks.

Asked if Tactical Steel has been involved in kickbacks to Ahmad or his associates, Seillier said: “Absolutely not. Tactical Steel complies with French law.”

“Tactical Steel has filed a lawsuit against Fahmy because he defamed the company in media. The deal with Tactical Steel was signed by Fahmy and we are still investigating this,” Ahmad revealed.

“When Morocco said it would organise the CAF 2015 and then withdrew, Toyota, Samsung, and Adidas withdrew their sponsorships, and ever since, we have been buying clothes from Tactical Steel,” he added.

“When I came to CAF, nothing was in order. I found a list of tools bought from Puma so I consulted the executive office and it said we had to go back to Adidas products. Everything the former marketing manager did was in exchange for a commission, and currently, many lawsuits are filed against him,” he said.

“My words were clear since I started working at my position at CAF, as I said that 50% of the confederation is for Egyptians as the headquarters country, and the rest is for all African countries. Everyone knows that only three Moroccans work in CAF and 50% of its employees are Egyptians,” he said.

“Fahmy tried to persuade women to testify that I sexually harassed them. Three of them told me that those accusations were planned against me. FIFA told me that no letters were referred to them in this regard as rumoured in the media,” Ahmad said.

“Hany Abo Rida is like my elder brother. I’m very proud of his friendship. Fahmi said that Abo Rida was against me during those issues but that was not true,” he said.

“Fahmy did not listen to anyone and would make decisions without referring to anyone. I’m diabetic and I get my treatment at my own expense, while in CAF we treat the sick on CAF’s expense, and in Fahmy’s case we stood by his side when he was sick and we paid $100,000 for his treatment,” he added.

“We chose Egypt because we trust it completely. The stadiums and everything are ready,” Ahmad asserted.

As for the relocation of CAF headquarters from Egypt to Morocco, Ahmad told Al-Masry Al-Youm: “These are just rumours, and their makers want to distract the media to minor issues.”