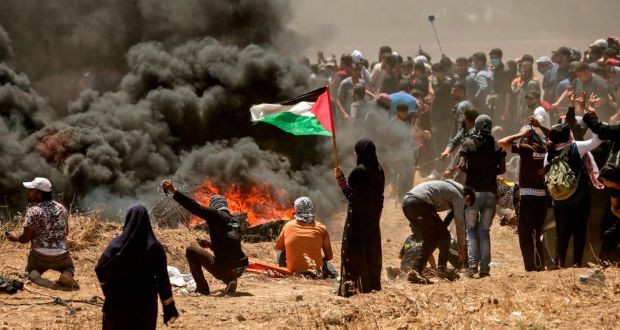 Israeli forces killed on Friday a Palestinian along the Gaza-Israel border fence, only a few days after a truce mediated by Egypt, Qatar, and the United Nations to end the escalation which erupted almost a week ago.

The health ministry in Gaza said that 24-year-old Abdullah Abed al-Al was killed by Israeli fire and 30 others were wounded in the weekly demonstrations along Gaza’s borders.

Thousands of Palestinians took part in the Friday demonstrations. Since last March, Palestinians have been protesting against Israel’s blockade of the territory, demanding to return to the lands from which they either fled or were driven from when Israel was founded in 1948.

More than 200 Palestinians have been killed and thousands were injured by Israeli forces during the Gaza protests which is entering its second year.

Palestinians are also demonstrating against the so-called “deal of the century,” a Middle East peace plan reportedly brokered by the US President Donald Trump’s administration.

Last week, Israel said that more than 600 rockets and other projectiles had been intercepted by the Iron Dome system, of which over 150 had been fired at towns and villages in southern Israel.

Meanwhile, Israeli forces also stated that it attacked about 260 targets belonging to armed movements in Gaza, particularly Hamas and the Islamic Jihad.