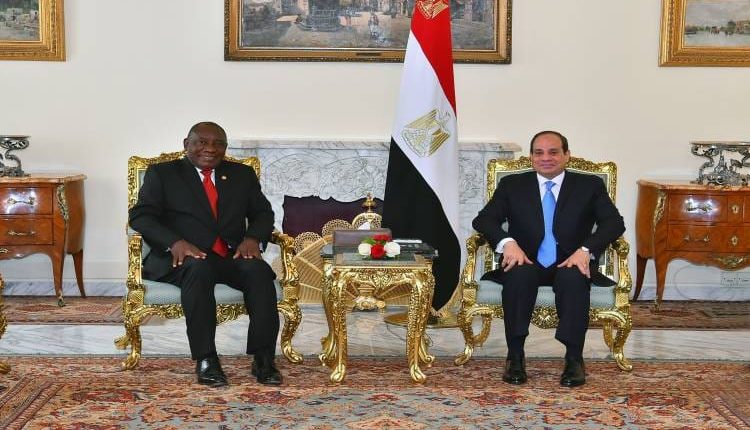 During the conversation, the Egyptian president congratulated Ramaphosa on the victory of the ruling African National Congress (ANC) in the parliamentary elections, and assuming a new term in office as president of South Africa in May. He wished Ramaphosa full success in his endeavours.

The president also confirmed that Egypt values its strategic relations with South Africa and looks forward to enhancing the frameworks of cooperation with president Ramaphosa, in addition to developing coordination and consultation on African issues of mutual interest.

For his part, Ramaphosa expressed appreciation for Al-Sisi, and affirmed his keenness to bolster bilateral relations and effectuate all forms of cooperation between the two countries at various levels.

The two leaders agreed also to maximize coordination and the exchange of views on various African issues, as well as supporting the joint African action, particularly in light of Egypt’s chairmanship of the African Union.

Also on Saturday, President Al-Sisi held a meeting with the prime minister; the governor of the Central Bank of Egypt; the ministers of defence, foreign affairs, petroleum, justice, supply, trade, finance, and interior; and the chief of the Administrative Control Authority, as well as the president’s advisor for urban planning.

The meeting discussed the government’s efforts to provide the necessary commodities for citizens during the holy month of Ramadan in sufficient quantities and at appropriate prices in different governorates.

Al-Sisi stressed the necessity of tightening control over markets, and enhancing the role of Consumer Protection Agency to ensure citizens’ access to goods of high quality.

The meeting also discussed the progress of national projects, as well as the latest developments in the Suez Canal Economic Zone.