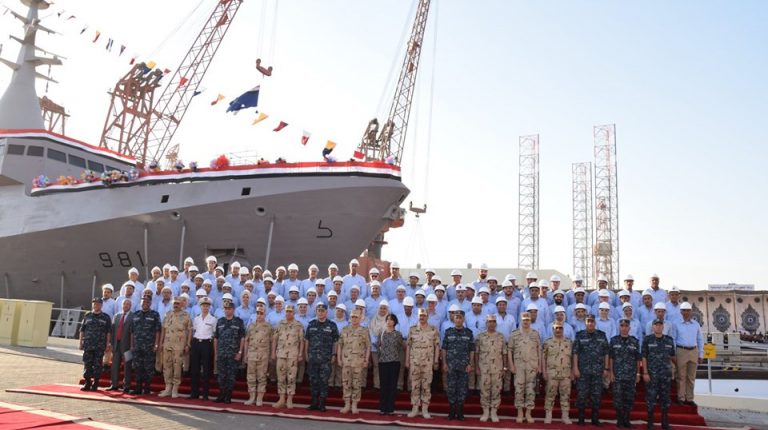 General Mohamed Farid, the chief of staff of Egypt’s armed forces, launched on Sunday the country’s second Gowind-Class Corvette Frigate, named Al-Moaz, in Alexandria, according to a Sunday statement by Egyptian army.

The frigate was built by Egyptian hands with the cooperation of France at the Alexandria Maritime Shipyard, the army added.

Top army commanders, engineers, and workers of the Alexandria Maritime Shipyard as well as the French consul general in Alexandria, Janina Herrera, attended the inauguration ceremony.

Herrera hailed the skills and qualifications of Egyptian engineers of the Alexandria Maritime Shipyard, and asserted the strength of the Egyptian-French relations.

The new frigate is part of a deal of €1bn ($1.12bn) with French Naval Group company signed in 2014 to provide four frigates to Egypt’s navy forces.

The warships are considered the most updatable unit in Egypt’s navy, as they contribute to securing free navigation and the Suez Canal.

The vessels are also capable of carrying out a range of missions from the protection of sovereignty to combating terrorism and illegal trafficking.

In September 2017, Egypt received the first corvette frigate manufactured by the French company. In 2018, Egypt launched the first home-made frigate.