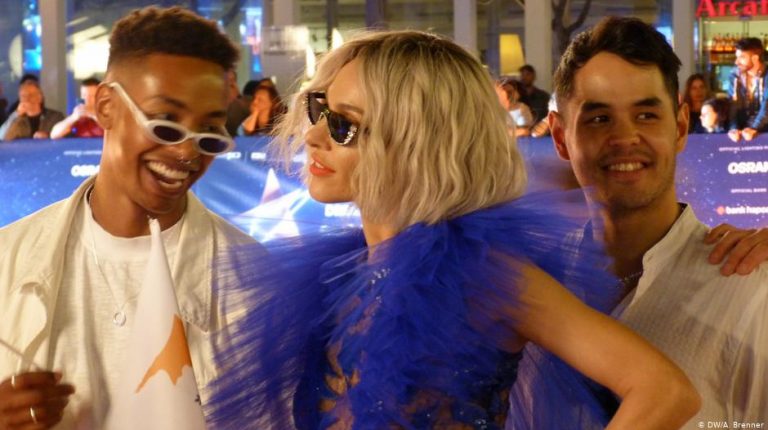 There’s very little that is not known about the Eurovision Song Contest. Every effort is made to insure maximum exposure for the artists, including an “Orange Carpet” reception.With the last of the countries' entries announced weeks ago, the official Eurovision videos have long since been been generating untold numbers of online views.

Each step of the yearly ritual has been assiduously reported on the contest's websites eurovision.de and eurovision.tv, from the arrivals of the contestants and their entourages in Tel Aviv to sneak previews of their final shows taken from the first phase of rehearsals last week. Multiple press conferences have given the artists every possible exposure.

The upcoming semifinals on Tuesday and Thursday will have three dress rehearsals each, as will the finale on Saturday, May 18, with many of these run-throughs open to the public.

There was no calm before the storm on the weekend either. On a mild Sunday evening on Habima Square in Tel Aviv, the Orange (not Red) Carpet Reception gave a complete review of the contestants from all 41 participating countries. Roughly half of the audience were the hundreds of accredited international journalists, the other half general public.

Although most Eurovision events run like clockwork, the four-hour marathon experienced long delays with the artists' limousines tied up in traffic in the bustling city. Access to the journalists' entrance was blocked for roughly half an hour by security forces until a small group of silent protesters that had gathered there were dispelled. There was no tension surrounding the incident, which authorities and spectators described as an expression of free speech.

Transmitted by Israeli public broadcaster KAN, the reception generated plenty of pomp and noise, from 16-year-old Zena of Belarus to Serhat, 53, delegated by San Marino. Like Oto Nemsadze from Georgia, many of the artists paused every few feet along the way to sing a refrain from their ESC song.

Then, a murmur went through the crowd: "Bilal is coming!" Wearing a white monstrosity of a dress, the French male singer, probably the most glamorous act of the season, drifted over the carpet, followed by an assistant whose responsibility it was to maintain order in his attire.

Positive energy on the orange carpet

All the artists were eager to talk with the journalists. Eighteen-year-old singer Eliot from Belgium called it the most amazing experience of his life, and Chingiz from Aerbaidschan said he enjoyed the "positive energy" on the orange carpet.

One group opted not to spread good spirits however. Iceland, which at one point considered boycotting this year's Eurovision Song Contest out of protest over Israel politics, sent the group Hatari to Tel Aviv. Scowling behind masks and black contact lenses, the group wear bizarre, attention-gathering costumes with an S&M look.

Another highlight of the evening was Netta, the winner of last year's ESC, who will open the first semifinal on Tuesday with a repeat performance of her winning song "Toy."

Excited to have had a close-up view of Netta were the two German candidates, Carlotta und Laurita, the duo known as "S!sters." Like them, some of the acts are using the Eurovision Song Contest as the launchpad for an international career. Others are already stars in their homelands. But for one evening on the Orange Carpet, everyone was a megastar.