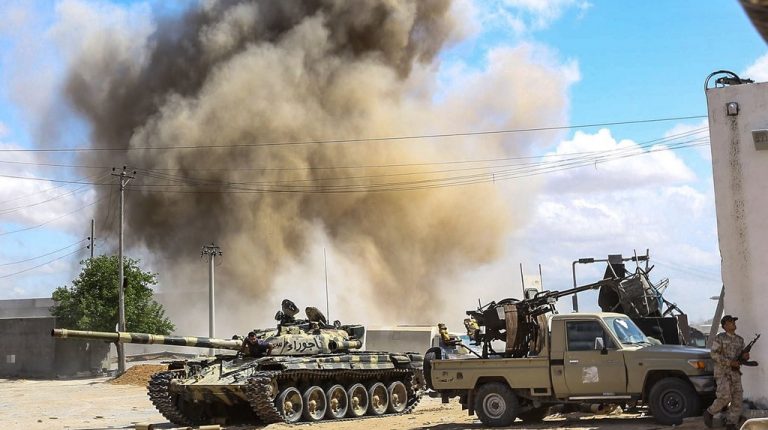 The European Union (EU) on Monday called on all parties in Libya to immediately implement a ceasefire and to engage with the United Nations (UN) to ensure a full and comprehensive cessation of hostilities.

In a statement, the EU said that “the military attack” carried out by the Libyan National Army (LNA) on Tripoli and the subsequent escalation in and around the capital “constitutes a threat to international peace and security and further threatens the stability of Libya.”

The EU also called on the parties “to dissociate themselves both publicly and on the ground from terrorist and criminal elements involved in the fighting, and from those suspected of war crimes, including individuals blacklisted by the UN Security Council.”

Earlier this week, the UN Security Council also called on warring parties for a ceasefire and to commit to UN-facilitated political dialogue.

More than a month ago, LNA Commander Khalifa Haftar, based in the east of the country and backed by Egypt and the UAE, started a military advance to the outskirts of Tripoli.

The Tripoli fighting resulted in the killing of more than 400 people and the injury of hundreds, the UN said. Meanwhile, the World Health Organization revealed that about 50,000 people have been displaced due to fighting.

The fight in the capital has negatively affected the UN’s efforts to reach a peace deal between rival factions and threatens to further damage the oil industry in the country.

Since the fall of Gaddafi in 2011, Libya has remained in chaos and is divided between two governments. Late in 2015, the UN reached an agreement to form a new “unity” government headed by Prime Minister Fayez Sarraj, based in Tripoli.