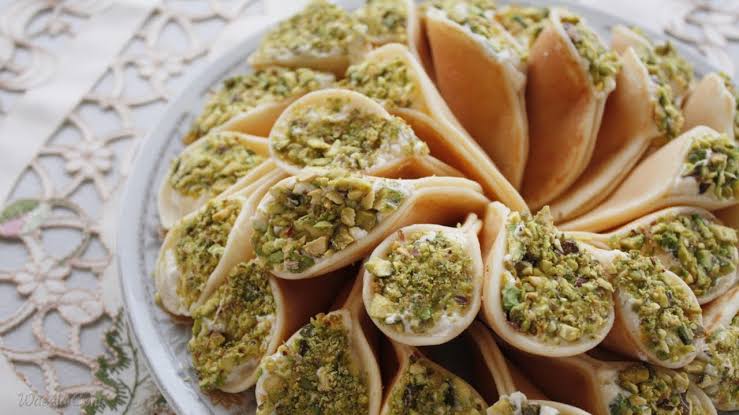 Whenever the holy month of Ramadan comes around, various images come to our minds, like Ramadan decorations, lanterns, meals, and desserts like konafeh, qatayef and baklava, which are some of the main dishes with a long history. These desserts were always on the tables of kings, princes, and caliphs in the older eras. It is said that these dishes were specifically made to impress princes and satisfy them.

Konafeh dates back to the Umayyad dynasty. There are many stories concerning when they began. It was said that the people of Belad Al-Sham came up with these dishes to be served during suhoor (meal before fasting) to Mu’awiya bin Abi Sufyan–the first caliph of the Umayyad dynasty–as he wanted a dish to satisfy his hunger during fasting hours. 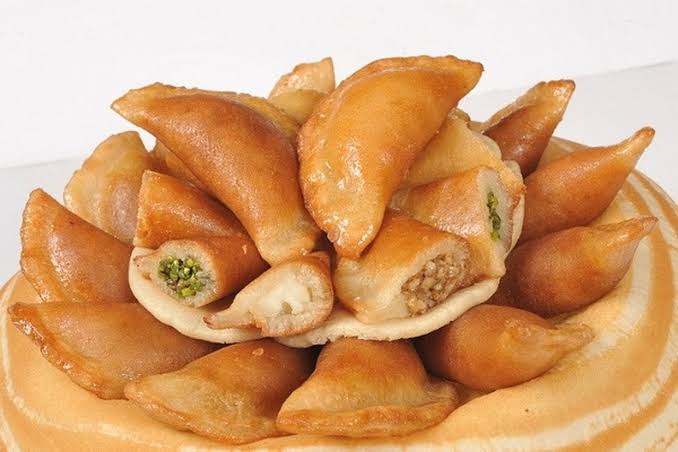 Abi Sufyan was a food lover who complained to his doctor about the hunger he felt during the day, so his doctor advised him to ear complex carbs, high-value sugars, and fats, which are not quickly digested and reduce hunger pans, therefore Konafeh was created for him.

It is said that the palace chef once made a liquid paste, then a scoop fell into the bowl of dough in thin threads on the stove which impressed the chef so he decided to dip it in margarine and then heated it until it became red, then he poured honey over it and served it to the caliph who liked it a lot.

Some say that Abi Sufyan was the first to come up with konafeh and that it was known for a while as “Mu’awya’s konafeh”.

It then became a habit to eat konafeh in Ramadan and became a food that the rich and poor equally love, making it a popular dish.

In another story, konafeh was made especially for Soliman bin Abdelmalek Al-Amawy. It is said that it dates back to the era of Mamluks who ruled Egypt during the period from 1250-1517 AH.

Islamic history scholars say that konafeh dates back to the Fatimid period which extended from 969 AH to 1172AH. They ruled Egypt, Morocco, and Belad Al-Sham. They say that konafeh appeared in Egypt then spread to Belad Al-Sham. This coincided with Caliph Al Moez Leldein Allah Al-Fatimi entering Cairo during Ramadan. The people went out to receive him, racing to present gifts to him after iftar, including Konafeh.

The first kind of konafeh is called “shaar” (hair) which looks like threads of hair, and it is called “machine konafeh”. The second is “hand konafeh”, which mainly depends on a traditional method with a pan that has holes. It is called “popular konafeh”. 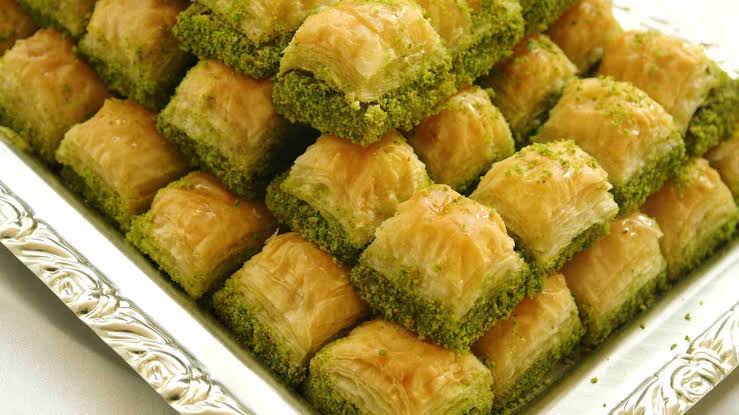 Even though technology has taken over the making of konafeh, there are still konafeh makers who go by the traditional methods of making konafeh.

Over time, making konafeh has become a science taught at universities and it remains today one of the most favourite dishes in the east. Each country has its own unique way of making and stuffing konafeh. The people of Belad Al-Sham stuff it with cream, the people of Mecca stuff it with cheese and no salt. The people of Nablus are famous for their amazing cheese konafeh.

As for “qatayef,” it is said that their name is derived from “qateefa” which means “velvet” because “qatayef” feel like the soft velvet. It is believed that “qatayef” dates back to the Mamluk era and was served as a stuffed pie for guests to eat.

Some believe that “qatayef” was older than “konafeh” as sweet makers were competing to make the most delicious dessert dish and to serve it beautifully. In Ramadan the importance of “qatayef” and “kanafeh” persists.

As for “baklava,” historians differ on the origin of the dish and whether it emerged from the Turkish or Greek culture.

“Baklava” is a type of sweet made from thin paste chips and has sugar and margarine added to it. It is then stuffed with nuts. It is said that Turkey learned about the dish for the first time in the ear of Mohamed the fourth as he used to love is wife “Mah Yara” who was known as “Rabaa”. He would not eat food made by anyone but her, so she invented a new dish for him, which was “baklava,” and when he tasted it for the first time, he said it was not like anything he has tasted before, so the name was then used.

As for the relevance of “baklava” to Ramadan, according to the book “The Ottoman Empire” by Donald Quataert, the emergence of “baklava” was in the late 17th century in the second half of Ramadan. During Ramadan at the time of iftar, the sultans would visit Topkapi Palace where the mantle of the Prophet was kept, and would distribute “baklava.” It is a tradition that has been followed until the era of Sultan Abdelhameed.

The making of “baklava” moved to Syria and the first person to introduce it was Fareeg from Istanbul. He lived in Halab and opened a shop for “baklava” in Ramadan.

“Baklava” is one of the reasons there is a dispute between Turkey and Cyprus because of the brochures distributed in Austria on the Europe Celebration day where “baklava” was stated as a dessert from Greek Cypriots.