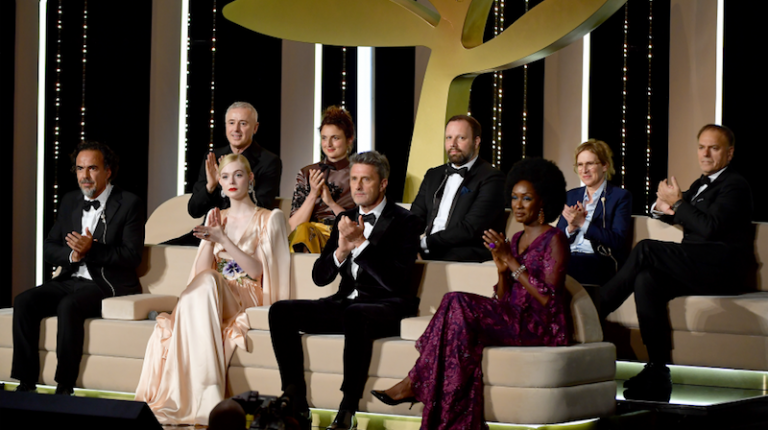 The Cannes Film Festival opened Tuesday evening on the stage of the Grand Théâtre Lumière, where dozens of films from around the world will be screened for the next 12 days.

The opening had one of the most packed line-ups in years as Hollywood stars and studios return in strength to the world’s biggest film festival.

The opening featured Charlotte Gainsbourg and Javier Bardem who launched the 72nd edition of the festival.

Edouard Baer, the host of the ceremony accompanied on the accordion by Aurélien Noel, took the stage with a speech that placed this edition under the banner of shared experience: “Cinema is the movie theatre, it is being together, going out. The collective, the group, human warmth. At the Festival de Cannes, sometimes the screening room is so spectacular that the film itself stops to look around.”

Studded with excerpts from the filmography of Agnès Varda, to whom the poster of this 72nd edition pays homage, the ceremony was enchanted by the voice of Belgian singer Angèle, seated at the piano to perform songs composed by Michel Legrand.

On behalf of all of the jury members, the Oscar winner talked about the importance of film as a communal experience, and the dedication, passion, and excitement of this jury as they embrace the Selection to discover within it the treasures of 2019.

Marking the return of Jim Jarmusch in Competition, the first film, The Dead Don’t Die, was screened after the Ceremony with the director and his impressive cast in attendance: Bill Murray, Adam Driver, Tilda Swinton, Chloë Sevigny, Selena Gomez, Sara Driver, and Luka Sabbat.

Also, American director Quentin Tarantino is to premiere his epic Once Upon a Time in Hollywood, 25 years after he after he lifted the Palme d’Or – Cannes’ top prize — for his film Pulp Fiction.

Once Upon a Time in Hollywood takes place in Los Angeles and stars Leonardo DiCaprio as a television Westerns star and Brad Pitt as his stunt double. Margot Robbie also appears as actress Sharon Tate, who was murdered by the cult leader’s followers.

The festival has sparked controversy by giving a prize to veteran French star Alain Delon, with the Women and Hollywood group saying honouring a man who has admitted to hitting women “sucks”.

Mexican director Alejandro Gonzalez Inarritu, who heads the jury that will pick the Palme d’Or winner, also struck a political note Tuesday by condemning populist leaders like Trump, but without naming names.

“The world is melting, and these guys are ruling with rage and anger and lies and making people believe that they are facts,” he told reporters.

“This (is a) dangerous thing we are returning to, to 1939,” he added, referring to World War II. “We know how this story ends if we keep with this rhetoric.”