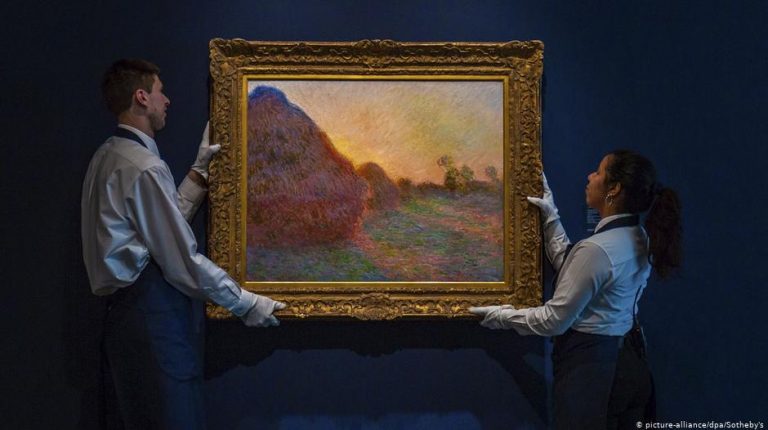 The auction house said the sale of the painting titled "Meules" was a world auction record for Monet, who was known for his landscape paintings. It is also the first work of Impressionist art to cross the $100-million threshold at auction.

Seven bidders fought it out over eight minutes for "Meules" before reaching the final price.

The oil on canvas was completed in 1890 and is one of only four works from the "Haystacks" series to be auctioned this century, and one of only eight examples belonging to private owners.

The 17 others belong to museums, including the Metropolitan Museum of Art in New York and the Art Institute of Chicago.

The works are widely celebrated for capturing the play of light on his subject and for their influence on the Impressionist movement.

Read more: Colonial art restitution: 'The desire is not to wipe museums clean'

Sotheby's said the painting was acquired by wealthy Chicago socialites directly from Monet's dealer in the 1890s and remained in the family until it was bought at auction in 1986 by the present sellers for $2.53 million.

Sotheby's did not provide any details on the new buyer.

The sale of 55 Impressionist and modern artworks at Sotheby's brought in just under $350 million, with the second-highest selling item, a painting by Pablo Picasso, selling for $20.7 million.