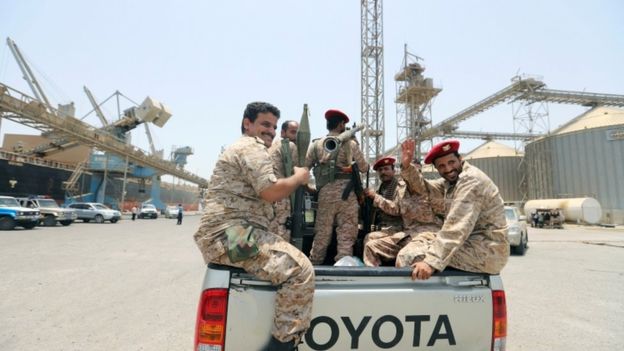 The internationally recognised Yemeni government forces, backed by a Saudi-led coalition, have killed 97 members of the Houthi movement and captured 120 others in the Dhale province, a Saudi military source told the Al-Arabiya TV station on Wednesday.

The military source noted that among the prisoners are leaders of the movement. He added that the “Yemeni army forces and resistance expelled the Houthis from the town of Qatabaa north of Dhale.”

Late on Monday, two Saudi oil-pumping stations affiliated with the east-west pipeline had been hit by explosive-laden drones. It came a day after Riyadh said two of its oil tankers were among four vessels attacked off the coast of the UAE on Sunday.

On Tuesday, Al-Masirah, a television station run by the Houthi group, said it had launched drone attacks on Saudi installations, without identifying the targets.

Al-Masirah’s report cited a Houthi military official as saying that “seven drones carried out attacks on vital Saudi installations.” On Twitter, Al-Masirah quoted the official as saying, “This large military operation is in response to the continued aggression and blockade of our people and we are prepared to carry out more unique and harsh strikes.”

The conflict in Yemen erupted in September 2014, when the Ansar Allah “Houthi” group, backed by Iran, seized control of the Yemeni capital Sanaa. Following the Houthi action, Saudi Arabia, the closest regional power to Yemen, announced in March 2015, the formation of the Coalition for Supporting Legitimacy in Yemen.

Besides Saudi Arabia, the coalition includes the UAE; Jordan; Bahrain; Pakistan; Djibouti; Sudan; Senegal; Kuwait; Morocco; Malaysia, and Egypt, as well as the internationally recognised government of Yemen. Qatar was also part of the coalition until the breakdown of the Gulf crisis in May 2017.