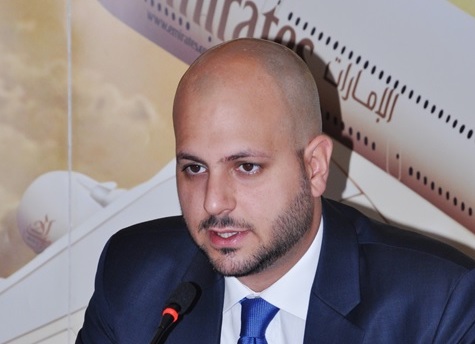 Dubai-based airline Emirates is expected to expand its already established lounge at the Cairo International airport (CAI) to absorb the anticipated increase of flights between Cairo and Dubai during the winter schedule which begins on 28 October, Emirates’ Country Manager for Egypt and Libya, Thani Al-Ansari, said.

“We don’t think about establishing a new lounge as we already inaugurated one last year, yet we have a good land area at our lounge and we can expand it if needed, following the planned flights’ increase,” Al-Ansari, told Daily News Egypt during the Sohour (the meal Muslims eat before they start fasting) event that the company hosted on Wednesday evening.

Emirates operates 21 weekly flights between Cairo and Dubai while it will increase flight numbers to 25 during the winter schedule, he explained, affirming that his company is performing well at the CAI and does not plan to operate in other Egyptian destinations such as Hurghada or Sharm El-Sheikh.

“Yet, in the future, we are open to considering possibilities of operating from additional Egyptian airports, according to the market’s updates, but not now we don’t think about the matter,” he said.

Security procedures at CAI are very good and the local authorities are cooperative, he mentioned, noting that tourist numbers who visit Egypt are remarkably increasing and foreign investors’ attention to conduct business in the country is improving which positively reflects on the airline business.

Emirates current fleet is estimated at 271 planes, he added, noting, “the company always aims to modernise the fleet according to the world’s best technologies. All the planes manufacturing companies develop fuel saving planes which is something we look for.”

“The recent codeshare partnership with flydubai opened about 40 new markets for us, and we are very happy with it,” he stated.

The strategic partnership between Dubai’s two airlines, Emirates and flydubai, continued to open up the world for travellers since its launch in 2017, and is set to grow even further in 2019 with new codeshare destinations to be added, according to a past statement of Emirates on 16 January 2019.

The partnership, which came into effect at the end of October 2017, has since delivered a number of benefits to customers of both airlines, such as offering greater global connectivity through more destination choices, flexibility with flight options when planning trips, one integrated loyalty programme, and the convenience of travelling on a single ticket with seamless point-to-point baggage handling, added the statement.