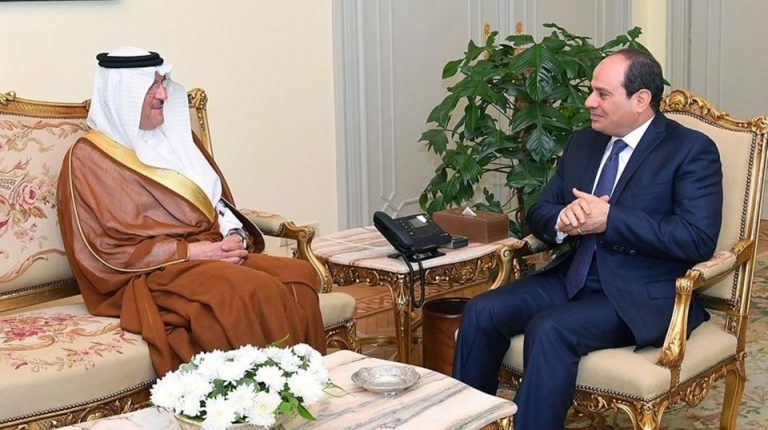 At the beginning of the meeting, Al-Nugali conveyed greetings from King Salman bin Abdulaziz and Crown Prince Mohamed bin Salman. Moreover, the Saudi ambassador sent an invitation to President Al-Sisi from King Salman to attend the 40th summit of the Organisation of Islamic Cooperation, which will take place by the end of May in Mecca.

Al-Sisi conveyed his greetings to the king and the crown prince, emphasising Egypt’s solidarity with the Saudi government and people in confronting all attempts at threatening the security and stability of the kingdom and the security of the Arabian Gulf in general.

The Saudi ambassador expressed his country’s deepest appreciation for the strong and supportive stance of Egypt in condemning the recent attacks by explosive-laden drones on two oil pumping stations in Saudi Arabia last week.

Meanwhile, Al-Sisi said that the current common challenges require the necessity of strong coordination between the two countries in order to confront all threats to Arab national security and regional stability.

Al-Sisi ordered the officials to continue work on finalising housing projects according to the time and quality set in the contracts signed in this regard.

He also gave orders that ongoing road projects should be operated after all required services are provided and after ensuring that all elements are ready to provide the best services in the transport field.

During the meeting, Al-Sisi also discussed with housing minister the status of several new housing projects including the New Administrative Capital (NAC), the new cities of Alamein, Mansoura, and Rosetta, in addition to those currently established in Upper Egypt, as well as roads and bridges constructed in Upper Egypt, in addition to water treatment projects in its governorates.

As for the housing minister, he reviewed the status of the first projects phase of the NAC.

Moreover, President Al-Sisi ordered further studies to be conducted to maximise religious endowment assets and investment returns during another meeting with Madbouly and the Minister of Religious Endowments, Mohamed Mokhtar Gomaa.

The meeting also reviewed efforts exerted by the ministry in the fields of advocacy, translation, publishing, training imams, especially regarding correcting misconceptions and spreading the jurisprudence of state building and patriotism.