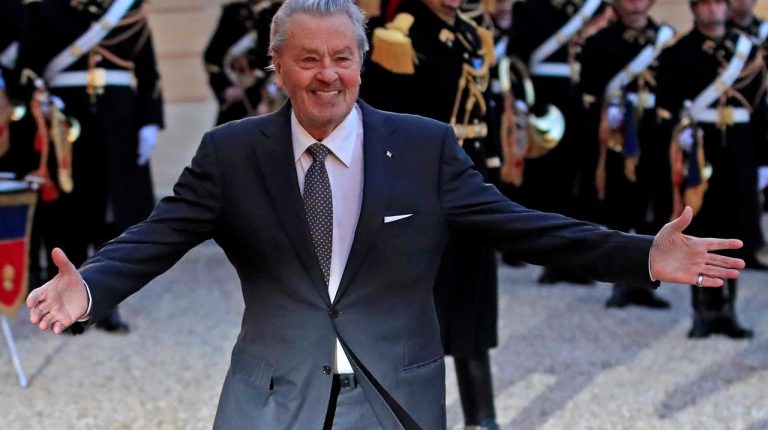 Along with Jean-Paul Belmondo and Michel Piccoli, Delon was one of the biggest stars in French cinema. On Sunday at the 2019 Cannes Film Festival, he will receive an honorary Palme d’Or (“Golden Palm”) award “to pay tribute to his wonderful presence in the history of film.”

While Cannes director Thierry Fremaux praised Delon as “a giant, a living legend and a global icon,” the festival announcement prompted controversy based on Delon’s personal life.

Following his success in the 1960s, Delon later starred in several more or less memorable gangster movies. The Swimming Pool (1969) is a movie that is more unforgettable, with Delon and Romy Schneider lounging naked by the pool.

In 1973, Delon once again played a hit man, this time in a Hollywood production, Michael Winner’s film Scorpio, which is one of the few exceptions in his more or less French portfolio.

Julius Caesar in Asterix at the Olympic Games, a 2008 film based on the popular comic series, is one of Delon’s rare roles in a comedy. Other than that, he’s rarely stepped before a camera in the past 15 years.

While Hollywood seemed to hold little allure for the French actor, his personal life, his affairs, and marriages were of great interest to the public. He was engaged to actress Romy Schneider at the beginning of the 60s.

When his bodyguard was found dead in a public dump in 1968, Delon was suspected of being involved in the murder. The scandal shook France. The case was dropped and never solved, and since then rumours surrounding his connections with the mafia still circulate.

He cemented his reputation of having dubious friends by publicly standing by his friendship with French right-wing populist Jean-Marie Le Pen, the father of the current far-right leader Marine Le Pen, yet it never really hurt his career.

Still the controversy around his persona was never publicly laid to rest. When Cannes announced Delon would be honoured at the 2019 festival, an outcry ensued. More than 23,00 individuals signed an online petition against his receiving the award. In it, they called him a “racist, homophobic, misogynist.”

Delon has acknowledged slapping women in the past and says he opposes the adoption of children by same-sex parents.

Cannes director Fremaux defended the decision to give Delon the prize, arguing that the actor comes from another generation and is free to express his personal opinions. “We’re not giving him the Nobel Peace prize,” Fremaux added.

Last year’s Cannes was also defined in part by protests, as 82 women stood on the red carpet steps together to protest the position of women in the industry. One of them was the recently deceased filmmaker Agnes Varda, who received the honorary Palme d’Or in 2015.