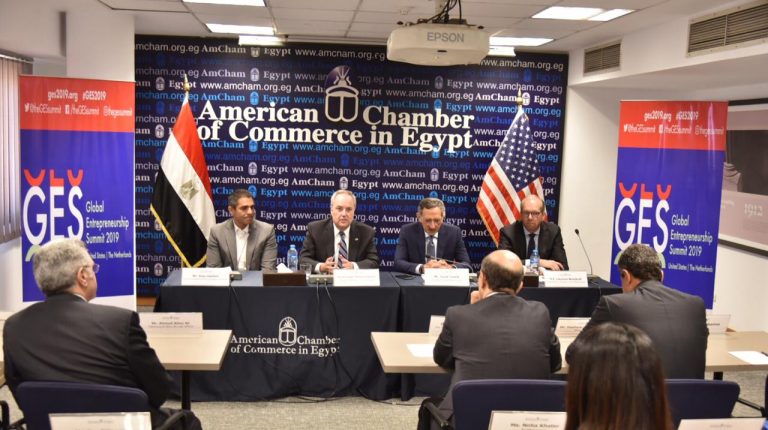 Only seven out 60 Egyptian companies applying to attend the Global Entrepreneurship Summit (GES), scheduled for 3-5 June in the Netherlands, were qualified to participate in the summit, Chargé d’Affaires of the United States in Egypt, Thomas Goldberger, said on Monday.

“We have many entrepreneurship programmes with Egypt that aims to boost this important sector. Entrepreneurship supports the economic growth for Egypt that is now about 5.5% and is expected to hike further,” Goldberger added during his participation at the conference which was hosted by the American Chamber of Commerce in Egypt (AmCham) on Monday.

Tarek Tawfik, president of AmCham Egypt, said that entrepreneurship is the driver of economic growth, adding that the government should not be the only player to achieve the country’s growth.

In September, the AmCham will organise a training session on entrepreneurship and angel investment, Tawfik declared.

Entrepreneurship is the oxygen of the economy, the ambassador of Netherlands, Laurens Westhoff, said, affirming that the cooperation between the Netherlands and the US to co-host the (GES) is proof of the strong economic policy of both countries.

The participants who will attend the summit will benefit from the environment there, and will have new ideas of intensive cooperation when they come back to their communities, the Dutch ambassador noted.

“Netherlands is a gateway to Europe, we are honoured to be part of boosting the global entrepreneurship process. Egypt can economically succeed when it focuses on entrepreneurship,” the ambassador added.

The Egyptian companies that will participate in the summit are Swvl, Elves, SmartCare, Breadfast, Almouneer, Chitosan, and Agrimatic Farms.