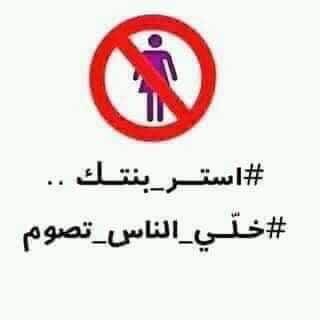 Men: “Please, dress modestly in public so that we can fast appropriately, as we are in the holy month of Ramadan. Also dear parents, please ensure that your daughters are modestly dressed in public.“

Women: “We cannot understand the relationship between your fasting and our clothes?!”

Men: “Indecent clothes worn by you during Ramadan distract us from our fasting.”

This dialogue is not an imaginary one, but a realistic combative conversation that took place and recently went viral on social media platforms between Egyptian females and males under the hashtag of “cover up your daughter, so men can fast appropriately”, calling on parents to ensure that their daughters dress modestly in public so that males can fast.

Men used the hashtag “cover up your daughter, so men can fast appropriately,” believing that indecent clothes worn by women during Ramadan distract men from their fasting. On the other hand, the people who refused this campaign explained that that this it is insulting to women.

Therefore Daily News Egypt investigated further into this social, male-dominatedconflict that is occurring on social media, to receive extra information regarding the opinion of the Egyptian street on this campaign, and to reveal the reasons behind the campaign.

Naturally, women and most of the society became more aware about women’s rights and revealed to DNE that this campaign is really insulting to women.

Agreeing with Ahmed, Mona Abdel Satar, 36, stated that in addition of giving an excuse to sexual harassment, it is considered an insult to women, giving men the right to control how women can dress.

“The difference between the human creatures and animals, is that human creatures can control their sexual urges while animals cannot, so if men even saw an undressed woman they should respect her and must not to look at her as Islam ordered them,” she asserted.

On the other hand, a 40-year-old woman called Hanya Ali told DNE that she agrees with the campaign explaining that according to religion, intercourse could be performed through eyesight therefore by dressing inappropriately women encourage men to commit a sin.

“I think it’s not wrong to advise each other in order to gain entrance into heaven,” Ali said.

“In Islam, no one must see a female’s beauty except her family,” she added.

At the same time, Ann Gamal, 26, stated that maybe the founder of the campaign’s intention was to change or encourage people to do their best during the holy month of Ramadan which is known for purification of the soul and body, however the way they abused it and the hashtags that they used are really in bad taste and reflect negative intentions toward people.

She called on the founders to apply moderation and to apologise for this distasteful campaign.