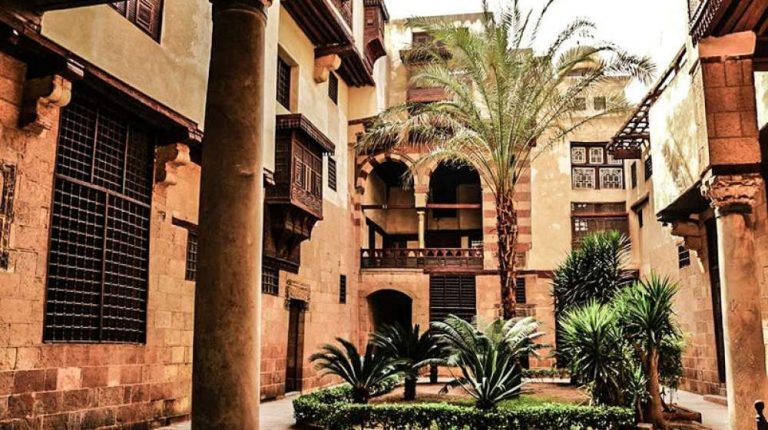 El Gamaleya District is one of the main historical areas in Cairo. This area has traces of Islamic civilisation from the Mamluk era. Although this area has many historical sites, however El Gamaleya district is best known only for Al-Mu’izz street–yet there are many forgotten places in this district.

It is said that El Gamaleya is named after prince “Jamal al-Din Mahmud al-Istdar” due to the school built by him in 1409 AH. That school was one of the greatest schools in Cairo. Al-Istdar  was a Mamluk prince from the reign of the Burji Mamluks. The Burji dynasty was a Circassian Mamluk dynasty which ruled Egypt, in the Mamluk Sultanate.

Visitors have to inter into El Gamaleya district through Bab El-Nasr gate, and on the right side after entering, people see Wakala al-Sultan Qaytbay.

The Wakala was an inn built by Sultan Qaytbay in 1481 AH, and it was called the dishisha inn which translated into English is crushed corn or barley. People named the inn dishisha because after the pilgrimage season, Qaytbay built the inn and decided that with all the profits, he would buy crushed corn or barley and distribute it to the poor.

Baybars al-Jashankir was a Circassian Mamluk of Sultan Qalawun. Baybars’s name is a Turkish-Mongolian name, which stands for cosen by the Lord, and his title was al-Jashankir which described his job in Persian, as Jashnkir means food connoisseur, He was the Mamluk prince who tastes the sultan’s food to make sure it is not poisoned.

Al-Jashankir ruled Egypt in 1308 AH for a period of nine months, which were the worst months for Egypt. Nile flooding had declined, leading to lack of planting due therefore non-existent taxes. The Khanaqah is equal to the university nowadays. The Khanaqah was described as the most beautiful Khanaqah in Cairo. The Khanaqah and the golden Quran which currently located in England are the only archaeological monuments left by the Sultan Baybars. The Khanaqah had a kitchen which distributed on a daily basis meat, rice, bread, and sweets to the Sufis and the poor living there.

This place has a different story, it is said that in the house, there is a Mashrabiya overlooking the courtyard of the house and when a groom comes to propose to one of the girls in this house, she will look at him from the Mashrabiya and if she accepts his proposal she will throw her handkerchief as a sign of approval.

The house is an old Ottoman era house, built by Abdel Wahab el Tablawy in 1648.

Wekalet Bazaraa, is the reason why coffee is associated with Egyptian funerals

Wekalet Bazaraa was built in Egypt during Ottoman era in the 17th century by Hassan Kutkhda. This Wekala was for selling wood. Then Muhammad Bazaraa bought Wekalet Kikhya, Bazaraa was a coffee merchant, so he dedicated it for the sale of Nabulsi soap and Yemeni coffee.

At that time, people loved coffee and drank it in excess, which made scholars issue a fatwa prohibiting coffee.

The seat of Prince Mamay al-Sifi or Bayt el Aady, the judge’s house

The seat is part of the palace of Prince Mamay al-Sifi, which was built in 1469 AH. The prince was responsible for the army’s weapons in Sultan Qaytbay region.

The length of the seat is 32m and the ceiling height is 1,120m. The prince used to sit in this place to watch the military parade.

Then the seat was named after the judge’s house because it became the judges’ headquarters during the period of the French occupation.

What are the social and cultural dimensions behind the phenomenon of harassment? (4)