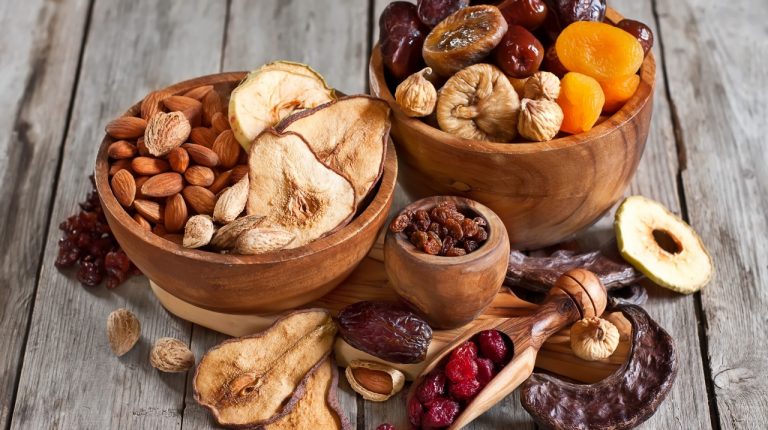 One of the most authentic Egyptian traditions is buying Ramadan “Yamish” to make “Kushaf” and other kinds of Ramadan sweets.

Many history scholars believe that eating Yamish dates back to ancient Egyptians who made sweets and decorated them for children to eat.

Yamish is an Egyptian word used in the Fatimid era. It means dried fruits and nuts. Dried apricots, figs, coconut, hazelnuts, peanuts, and cashews are among the main types of Yamish.

The caliphs in the Fatimid era would distribute Yamish to the poor all Ramadan.

In Egypt you would see Egyptian families’ great demand for Yamish, and each Egyptian kitchen would have Kushaf where a mix of Yamish is prepared.

Egyptians usually began the habit of buying Ramadan Yamish during the reign of the Fatimid state in the period 365 AH – 567 AH, which ruled Egypt for some two centuries.

One of the most famous selling markets of Yamish in Egypt is the Qusun area founded by Prince Saif al-Din Qusun at Bab Al-Nasr street during the 18th century AH. The market was the destination of most merchants coming from Syria and with their goods of oil, soap, pistachios, hazelnuts, and walnuts to be sold before Ramadan.

The market of Yamish moved in the 9th century AH to the area of ​​Gamaliyah and then to Boulaq Abul Ela, then to Rawd al-Farag and then to Souq El Sokareya, which sells varieties of Yamish and Ramadan drinks as a main commodity provided as a kind of entertainment and also to guests and it is likewise given to children who carry lanterns and roam around houses singing famous Ramadan songs.

Kushaf means a drink made from dried fruits, dates, and raisins drenched in water. It is a word of Persian origin.

Ramadan drinks vary, but the most famous of them all is Qamar Al Din. It is famous in the entire Arab world and is made of squeezed and dried apricot kept in plastic packages. It then drenched and has sugar added to it before it is ready for drinking.

It is said that the origin of Qamar Al Din dates back to 1400 AH in Syria which was famous for making it. It is believed that Al Waleed bin Abdel Malik, the Umayyed caliph, used to order the drink to be distributed to the people in celebration of Ramadan.

Ancient Egyptians used the drink Liquorice juice as a treatment for stomach diseases, which is why they called it the Royal Drink. Doctors would mix it with bitter medications to hide its taste, but it has then become the drink of the public in the Fatimid era.

The character of the Liquorice juice seller is folkloric with special distinctive clothes and statements he repeats.

Liquorice juice comes from a plant found in Syria, Europe, and Egypt but is mainly famous in Egypt as a Ramadan drink.

It is one of the drinks Syria, Lebanon, and Palestine are famous for. It is a mix of dates, grapes, water, rose water, pine, and raisins.

It is famous in the Mediterranean region as it is cultivated in Libya, Palestine, levant, Morocco, and Cyprus. It moved from there to Ramadan tables through Arab merchants. It treats illnesses of the respiratory system. It was mentioned in the Bible under the name “Bread of St Hanna”. Carob is drenched in water for several hours then filtered and has sugar added to it.

It is a drink coming from India. The pulp of the Tamarind is soaked in water and mixed with hibiscus and you can have it during iftar because it counters thirst.

An Egyptian drink made from coconut, milk, and sugar or honey. Some say it dates back to the era of Mamluks.

Vemto first appeared in Manchester city in Britain as a healthy alternative for beer. It was marketed as a drink that gives energy and vitality. It is one of the most famous drinks in Gulf countries as about 35m bottles of Vemto are sold every year, and half the quantity is sold in Ramadan.

Recently added to the list of Ramadan drinks, doum is a tree found in Africa and Upper Egypt, and has many medical benefits. It is known that Doum is one of the juices which treats stress, cools the body, and improves digestion.

To get doum, soak it for a long time in water or boil it and add sugar and filter it.

It is one of the main drinks on a Sudanese table, as it gets prepared even before the start of Ramadan. It is made of white corn sprayed with water until it blossoms then left under the sun. Corn is then minced and mixed with sweet spices like cinnamon and ginger. It is mixed and left for fermentation and subsequently shaped into circular slices heated on stoves and put away until Ramadan. It helps those who are fasting resist thirst.