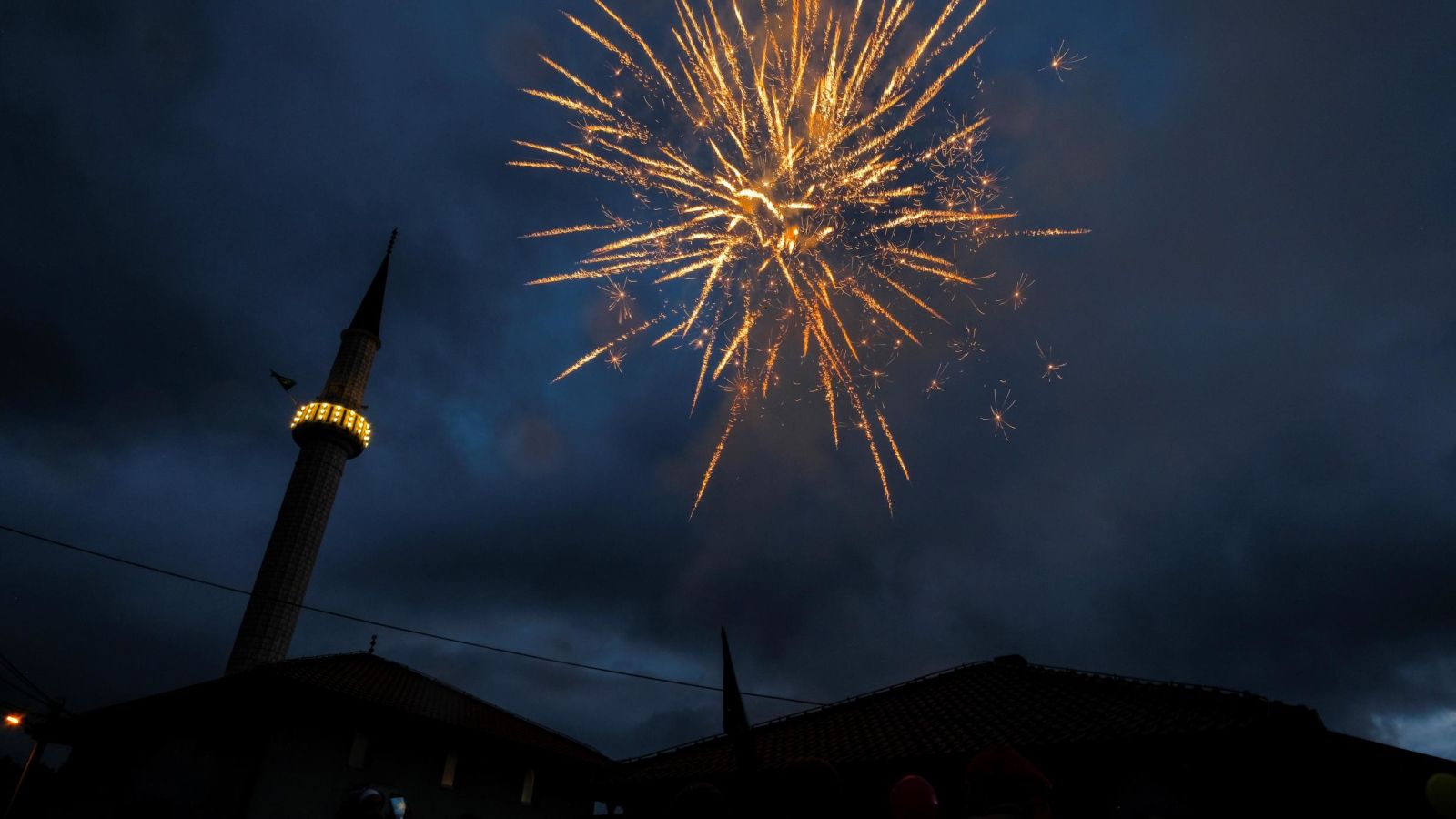 Preparing for Ramadan starts a while before the month begins, as Muslims go about cleaning the mosques which volunteers and young people fill and decorate.

When the start of Ramadan is confirmed by the state, different forms of celebrations start in Bosnia, and you can see lanterns and lights everywhere.

Ramadan is considered a chance in Bosnia to spread the sense of takaful (sponsorship) and paying the debts of the indebted as well as collecting donations for the needy.

In Bosnia, Ma’edet Al Rahman (Mercy Table) brings together people of all religions and families, relatives and neighbours are all invited.

The historic yellow citadel is one of the most beautiful places chosen by the people of Bosnia for iftar (breaking the fast) given the beautiful view. From there, the Azan (call to prayer) and cannon (to signal the beginning of eating) can be heard throughout the entire city, announcing that it is time for iftar.

Firing the cannon is a tradition that developed in the 20th century and stopped during the period that followed WWII as firing cannons was banned. The tradition then came back to life in 1997, two years after the Bosnia and Herzegovina war.

Ramadan in Sarajevo is distinguished with a kind of pastry called “Somon”. Its distinctive smell and taste spread are noticeable in Ramadan, so the people of Sarajevo believe that the smell of Somon is the real smell of Ramadan, and that is why you can easily see long queues in front of bakeries during Ramadan. 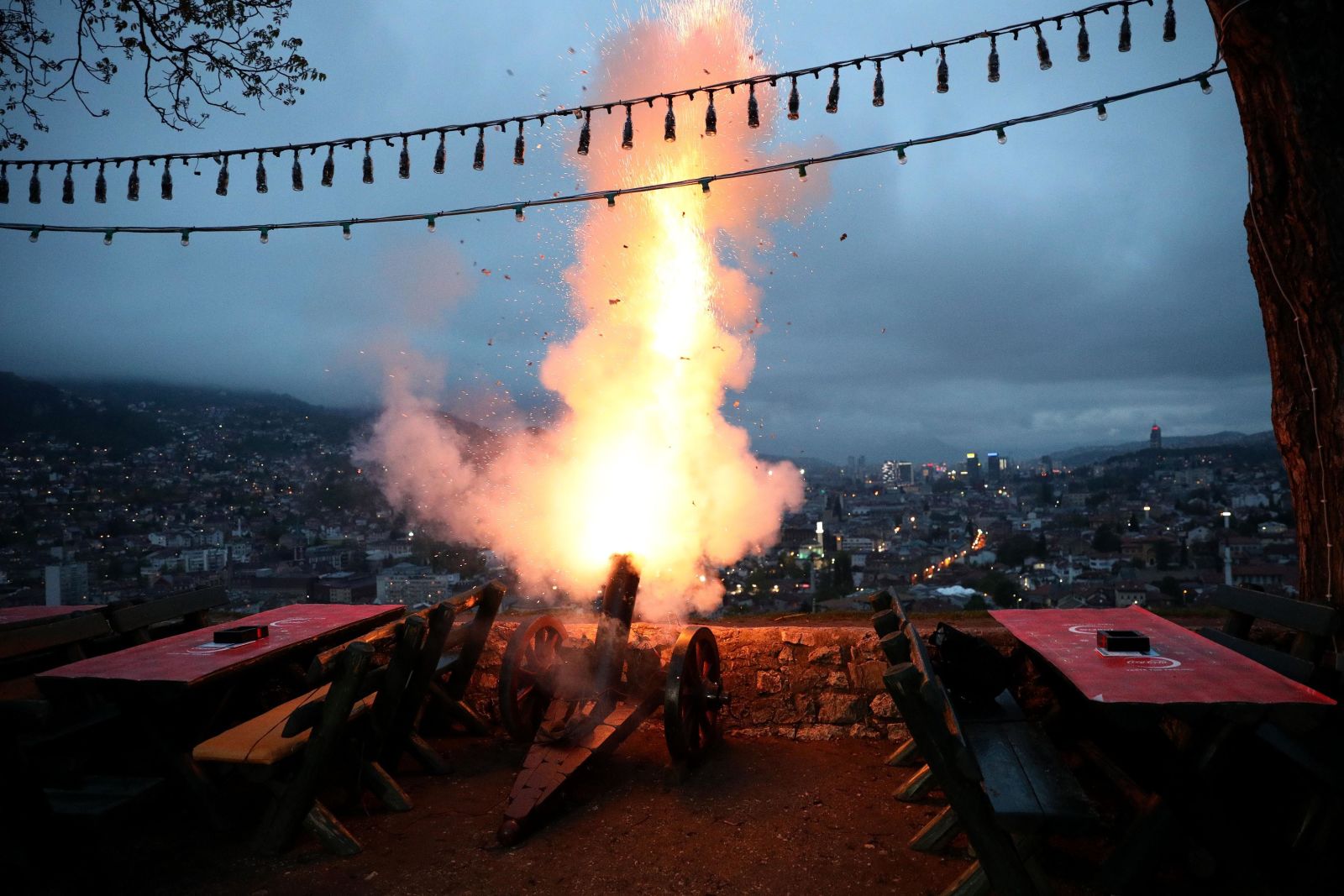 Bosnian people prepare popular dishes that are specially made in Ramadan. One of their famous dishes is “Tupa”, which is a mix of eggs, milk, and cheese. It is served as a side dish. Also, specific kinds of bread are baked in Ramadan as a way of honouring for the month. Some of the most famous foods on iftar tables in Bosnia include pita bread, cabbage, stuffed turkey, salads, kabab, pies stuffed with meat or potatoes, cheese, and spinach.

In Ramadan in Bosnia and Herzegovina, the markets get crowded as the period between noon and afternoon witnesses great demand by fasting individuals who purchase their vegetable, meat, and legume needs to prepare iftar before Azan Al Maghrib (sunset call to prayer). Politicians and public figures in Ramadan in Bosnia pray Taraweeh (special Ramadan prayers) around the country without tight security.

After iftar and Taraweeh prayers, coffee shops open their doors before the people of the city and tourists from various countries.

One of the main things that distinguishes Bosnians is their strong connection to coffee. To them it is more than a drink that they have known since the time of the Ottomans. Coffee is a national drink and all families have manual copper devices to crush and brew coffee.

One of the main daily habits of Bosnians in Ramadan includes reading the Qur’an during the period from noon to afternoon. This allows Bosnians who do not know Arabic to listen to Qur’an in Arabic. In the capital, Sarajevo, a Ramadan Festival is organised to offer many cultural, social, and religious activities such as a group iftar, shows, and classes in mosques. The festival starts on the first day of Ramadan at the yellow citadel. The activities continue in various historic buildings in the city.

The people of Bosnia get excited about the Eid (feast) following Ramadan and congratulate one another. Their main traditions before the Eid are decorating homes, spraying nice-smelling air fresheners, and wearing new clothes. Usually, the first day of the Eid is devoted for family and cemetery visits. Bosnians also have the habit of giving young children money during the Eid.