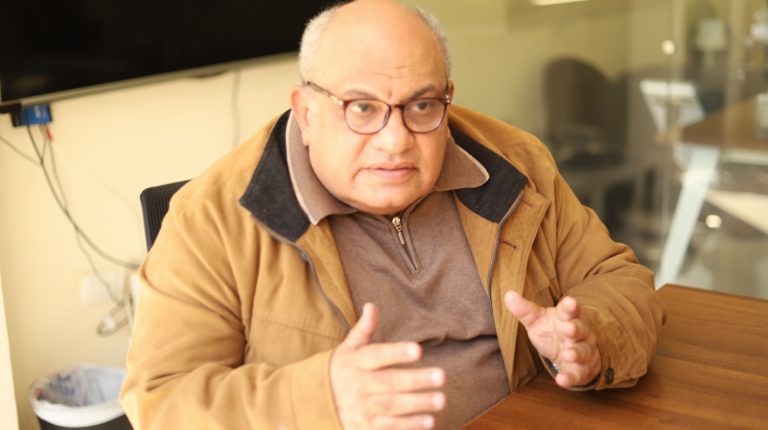 Egyptian squash occupies a significant position in the world at the present time, where the top 10 rankings in early May included five Egyptian players, comprised of four players in the top five ranks, namely Ali Farag, Mohamed Shorbagy, Tarek Moamen, and Karim Abdel Gawad, in addition to Mohamed Aboul Ghar in ninth place.

On the women’s level, the list of top 10 players in the world includes four Egyptian women, among them are the first three players, Renem Al-Waili, Noor Sherbiny, and Nour El Tayeb, along with Nouran Gohar in seventh place.

With this great distinction and clear Egyptian control of the game in the world, Daily News Egypt spoke with Assem Khalifa, head of the Egyptian Squash Federation, about the reasons for the success of the game in Egypt, and the plans of the federation to maintain this excellence, the transcript for which is below, lightly edited for clarity:

What explains the superiority of the Egyptian squash globally during this period?

Squash in the whole world happens to be controlled by some countries, such as sometimes England, Australia, and Pakistan. Egypt is one of the oldest unions established in 1931. There was Egyptian control over intermittent times, such as Abdul Wahid Abdul Aziz, Abdel Fattah Abutaleb, and others. With the current federation, we put a plan based on the continuity of generations, started 10 years ago. We dealt with squash as a product that needs a lifecycle to reach the production stage. The main dependence in this plan is spending on the juniors’ sector, as developing squash champions needs seven years, starting with youngsters who are 10-years-old.

What are the sources of funding?

We rely on plans with the ministry of youth and sports. We present a study to the ministry against results. With these results, we are fully committed to the ministry. This has happened with all ministers who took the post, even the current minister, Ashraf Sobhy.

How much is the squash federation’s budget?

The budget is EGP 4-5m per year. We look at plans which require expenditures. We are working to provide private resources. We do not rely solely on government support. What happens is that we send out our plan for the size of the activity and the expenses involved–not a fixed figure. Sometimes, we continue what we did to maintain our plans with sponsors. We, however, have a fixed sponsor, namely the Commercial International Bank (CIB), which helps with many tournaments and plans at variable numbers. Dealing is done through specific suggestions we present to them in order for them to study and either approve or decline them based on the study. The CIB has been our strategic partner.

What are the preparations for the Women’s World Cup in October?

The organisation of the Women’s World Cup in October in Cairo is funded by the International Federation through its committees which work in cooperation with the Egyptian Federation, because these competitions require a substantial effort and spending which burdens the Egyptian Federation. The establishment of stadiums is beyond our capabilities, which focuses only on the players. In previous times, Al-Ahram has been organising competitions for 15 years. It was of great benefit to the game and pushed it forward. Under the current circumstances, no one can replace it except for the attempts of some businessmen such as Naguib Sawiris in the El-Gouna Championship, Hisham Talaat Moustafa with the Madinaty Championship, or Ahmed El Abd with the Black Ball Competition. These are the developments of what Al-Ahram did. Presentation only focuses on football, and it generates their revenues and plans. Those who organise squash tournaments do not earn much but do it for the love of the game.

How much does it cost to organise a tournament?

The cost of organising a tournament for squash is EGP 6m. Egypt is not a rich country but we are proud to have four major competitions like the United States despite the huge economic differences between the two countries.

Why is squash described as the game of the rich?

The shift from hobby to professionalism is what makes some feel that the game is dominated by the rich since spending has grown. The racket alone costs EGP 3,000 and players need special shoes, a good trainer, and other requirements. The lack of infrastructure for the game also limits where it can be practiced.

Does the federation use foreign trainers?

The federation does not rely on foreign coaches at all. Egypt exports trainers abroad. The salaries for top notch trainers could reach EGP 50,000 per month.

How much time is needed for training?

The good player would spend six hours of training per day. Good players know how to organise their time well.

Is squash a financially profitable game?

Good players earn well, but they have to dedicate their lives to the game. The currency floatation contributed to maximising the value of the awards. One of the reasons why squash is successful is the presence of role models like Aly Farag, Nour Sherbiny, Tarek Moamen, Nour El Tayeb, and Ranim El Walily among others.

Does the federation have a role in the sponsorship contracts?

The federation is not a party to private sponsorship contracts between players and companies, but it is a party to the contract between the player and the club. The federation has a limited role for ranked players and focuses on juniors. We already cared for professional players until they reached their current positions.

What is the difference between the Squash Federation and the other federations?

The administration is prudent and wise to manage squash, based on a strong history. It can be said that the success of the Squash Federation may have not occurred if the administration was focused on other games. Squash has some advantages, as the federation continues to develop plans to stay atop the global ranking.

Are there plans for your sports investment?

So far, there are no plans for sports investment. After the new rules, there are new clubs which we came up with. We have economic ideas which we are studying and we need the right time and climate.

How did Egyptian women excel in squash?

Women know how to adapt their own lives, the federation does not intervene, and treats all equally. This is shown by the fact the both men and women are excelling on global rankings.