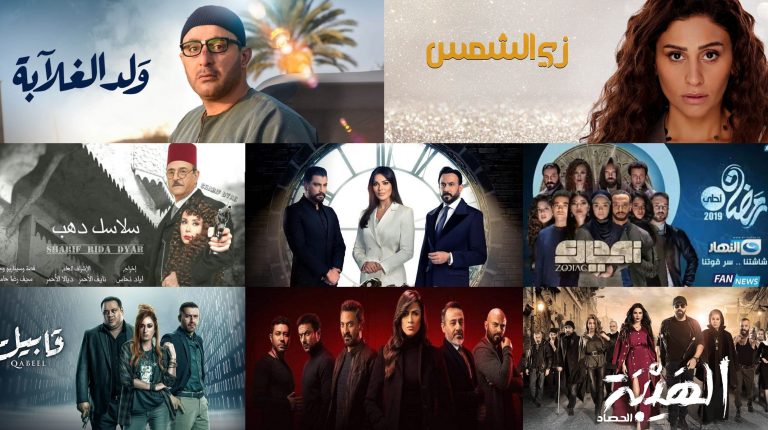 Having 25 series only in this season compared to 30 series in last Ramadan seems negative, but the question is has this decrease impacted women’s participation in Ramadan series, both in front, and behind the camera?

Only Eight eight dramas only include female lead characters

There are 25 series this year, and from them there are only eight dramas that which included female lead characters.

Compared to last year, where there were 30 series, with 11 dramas which included female lead characters or equal leads between males and females. For women lead characters were only seven.

Maryam Naoum is still the most prominent name in terms of scriptwriting when discussing women in the field of drama series.

Despite the fact that Naoum is always proving that women can be perfect screenwriters, however, unfortunately, this season she is considered the only writer.

Naoum is participating in this Ramadan season as the director of the writing team in the series of “Zai El Shams,” (Like the Sun).

This is considered a very limited contribution for women; it is less than 1%.

That situation is not too different from the situation last year, where there was also– in addition to Naoum–Enjy El Kasem and Sama Abdel Kahlek who co-write the “Layaly Eugene” series.

Unfortunately, last year there was only one female director among the 30 series, who was Hala Khalil in “Bel Hagm El Aely.”

This year also there is only one female director also who is Sheren Adel who directs two series which are, “Sha2et Fesal,” (Fisal’s Flat), and “Hogan.”

Meanwhile the absence of Kamla Abou Zakry this year from this season remains quite disheartening.

Noteworthy, it was planned that the series of “Zai El Shams,”(Like The Sun) was to witness a beautiful cooperation between directors Abu Zakry and Naoum, who worked together before in three successful series during past years, namely ” Zaat,” ” Segn El Nasa,” (Women`s prison,) and “Wahet El Ghorob,”( Sunset Oasis).

But unfortunately, this cooperation failed this season due to a disagreement between Abu Zakry and the producer which lead to the withdrawal of Abu Zakry from completing the directing of the series and she was replaced by director Sameh Abdel Aziz.

Unfortunately, no women in the shooting field

This year witnessed the absence of the name of Nancy Abdel Fattah who is considered as the only female name in the field of shooting, whether in cinema or television.

Most of dramas this year have been based on folk songs

Most of the dramas this year have been based on folk singers rather than on tunes with singers’ voices.

Meanwhile, most of the dramas last year have been based on musical tunes rather than on tunes with singers’ voices.

This season witnessed the monopoly of the Synergy company for most series, where it produces 15 series out of the 25 ones being broadcasted, representing 60% from the total number of series this year.

Hence this led to a decreased competition in general and no female producers this year.

Compared to last year, the number of producers last season reached 22, but unfortunately there were only two female producers: Maha Selim for “El Rehla” (The Trip) and Mona Kotb for “Bel Hagm El Aely.”

Finally, this season appears rather unsatisfactory in terms of female representation especially behind the camera. But we hope to see a better representation next year compared to this one.

Also in hope to see a better portrayal of women this season than any year before, and in that context, the President of National Council of Women (NCW), Maya Morsi, announced days before the start of Ramadan that the NCW formulated a committee headed by Suzan Al-Kalini, head of the media committee at the NCW, to monitor the image of women in the series, commercials, and programmes to be screened on television during the holy month of Ramadan.

Morsi noted that this committee will prepare a content analysis to produce a report on the media’s treatment of the image and issues of women in reference to the media code established by the NCW’s media committee and approved by the Supreme Council for Media Regulation.

A final report will be prepared by the end of Ramadan, including the monitored results and recommendations. Subsequently, the analysis will be submitted to the Supreme Council for Media Regulation and publicised in various media outlets.