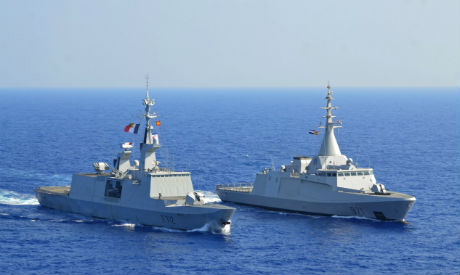 Egyptian and French naval forces started on Tuesday a maritime training exercise in the Mediterranean Sea, according to a statement by Egypt’s armed forces.

Units of the Egyptian navy and French frigate SURCOUF took part in the training.

It comes within the framework of the Egyptian armed forces’ efforts to bolster military relations with different countries.

The training included maritime activities on how to apply sailing formations, counter hostile targets, and repel non-traditional threats, as well as carrying out inspection of vessels.

In March, both navies conducted a joint military exercise in the Egyptian regional waters.

Several Egyptian and French vessels participated in the drills with a view to boosting cooperation and exchanging experience between the two countries.

In December 2018, Egyptian and French naval forces carried out joint military drills at a military base in the Red Sea, aimed to enhance bilateral military cooperation and recognise recent naval combating tactics.

In July 2018, Egypt and France conducted joint exercises in the Red Sea. In February, they also launched the Cleopatra 2018 naval exercise to boost security in the Red and Mediterranean Seas.

Several activities were conducted including confronting terrorism and naval security threats, as well as protecting vital targets against non-traditional threats.

Egypt is keen on enhancing its military defence and exchange expertise with its brotherly countries in order to combat terrorism, and secure its borders.