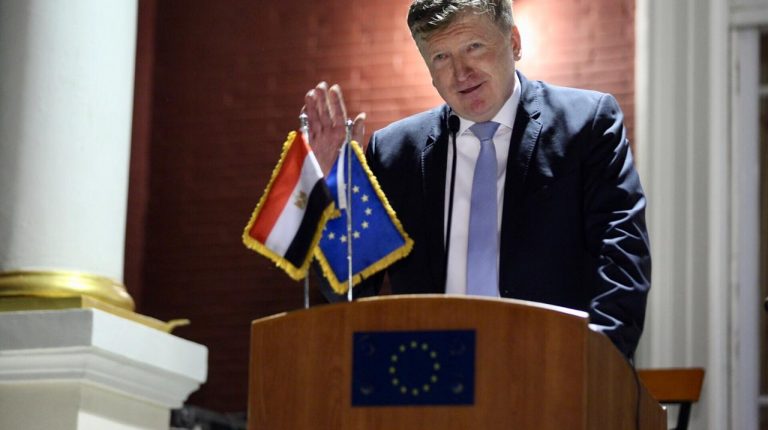 The European Commission is conducting a study over the possibility of moving Egypt to further level in terms of free trade agreement, head of the European Union delegation to Egypt, Ivan Surkos, said on the sidelines of an Iftar held by the EU on Tuesday.

“We expect the study to be finalised in couple of months. The study will define what can be offered to the Egyptians to facilitate the trade exchange, the ambassador told Daily News Egypt following the Iftar, adding that the new deal will likely be something in between the already signed EU-Egypt Association Agreement and the Deep and Comprehensive Free Trade Area (DCFTA).

The EU–Egypt Association Agreement is basically about free trade area and focuses mainly on exchanging goods without restrictions, the ambassador explained, noting that the EU has another level of trade agreement which is called the DCFTA and includes services on trade agreements.

The EU study is on how to harmonise the procurement procedures with Egypt, how to integrate E-commerce, and how to reach a mutual recognition of technical norms, the ambassador said, adding that the EU proposed a DCFTA to the Egyptian authorities that said they aren’t ready for the time being, yet they agreed to take the trade agreement to another level.

The trade and economy clusters of the EU–Egypt Association Agreement council will meet in Cairo on 16 and 17 June to discuss the possibilities of what can be done on the next level of the joint trade agreements, Surkos mentioned.

Moreover, the ambassador said that there is a huge financial support provided by the EU to Egypt for the water sector, including about €450m ($502m) and projects covering 12 governorates that will improve the lives of around 12.5 million Egyptians.

There is no doubt that Egypt’s vast untapped energy potential holds immense opportunities for citizens and businesses to fully benefit from the sustainable energy transition, the ambassador mentioned.

“We all know that Egypt’s electricity demand is growing rapidly due to its growing population and the economic and industrial development. The Egyptian government is taking action in the right direction with its new “Sustainable Energy Strategy 2035″, which was funded by the EU,” the ambassador said.

The EU has also co-funded with the European International Financial Institutions the 240MW wind farm in the Gulf of El Zayt, and is currently funding another under-construction 250MW project in the Gulf of Suez, Surkos added.

Additionally, the political cluster of the EU-Egypt Association Agreement will hold meetings on 23 and 24 of June 2019 to discuss political issues updates, the ambassador noted, adding that the EU agreed on €60m ($67m) for migration issues more than a year ago, yet the activation of the deal still waits for the parliament’s approval.

The ambassador said that another round of migration dialogue will be held on 10 July and European officials will be present, including Christian Leffler, the deputy secretary-general of the European External Action Service (EEAS); and Simon Mordue, the deputy director-general for Migration and Home Affairs of the European Commission.

Egypt is a key partner to the EU and one of the countries that play a crucial role in the region, the ambassador said, adding that Egypt’s sustainable stability and security are not only important to the Egyptians but also to the entire region as well as to the EU.

EU has a firm belief that democracy, human rights, and fundamental freedoms are essential to achieve sustainable stability of the region, Surkos noted, emphasising the importance of the civil society which is a key participant in the economic, political, and social development.

NGOs also should have the opportunity to work in an enabling environment in order to perform their role, he explained.

EU is against escalation in the Arab Gulf or using the force to solve the political issues, the ambassador stressed.

“In the EU, we believe that my neighbour’s strength is my strength and we apply this principle in our foreign relations,” the ambassador asserted.

The first EU-Arab summit that was held in Sharm El-Sheikh in February was attended by the heads of states and governments of both the EU and the Arab League, he elaborated.

The summit witnessed in-depth discussions on different topics that aim to enhance cooperation between Europe and the Arab World, the ambassador noted.

Free media and well-informed citizens are bases for a modern democratic country, the ambassador noted, adding that access to information and freedom of media are essential in order to formulate and successfully implement government policies.

“We support and defend these principles within the framework of our partnership with Egypt as well as with all our partners around the world,” he asserted.