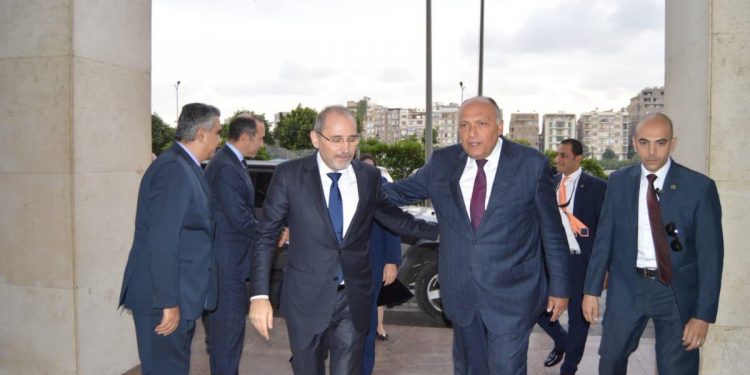 The meeting came as part of an earlier agreement to hold periodic bilateral talks to consult and coordinate over various issues.

The two sides affirmed the specificity of Egyptian-Jordanian relations and the common desire of the two countries to push forward the bilateral cooperation to wider horizons upon the joint directives of President Abdel Fattah Al-Sisi and King Abdullah II.

The discussions of the officials topped the Israeli-Palestinian peace process, as well as

the latest developments in Syria, Libya, and Yemen.

The officials also discussed ways to strengthen mechanisms of joint Arab action in the face of the current challenges faced by Arab national security, and to ensure the maintenance of security and stability in the Arab region and ways of boosting bilateral relations between Egypt and Jordan.

The two ministers agreed on the continuation of coordination and consultation between the two countries at all levels.

The next meeting between Shoukry and Safadi is expected to be held in Amman, Jordan.

Bilateral relations between Egypt and Jordan greatly enhanced specially with the convene of the meetings of the Higher Egyptian-Jordanian Committee.

There is a joint cooperation in various key fields like transport, health, culture, media, tourism, scientific research, and education.