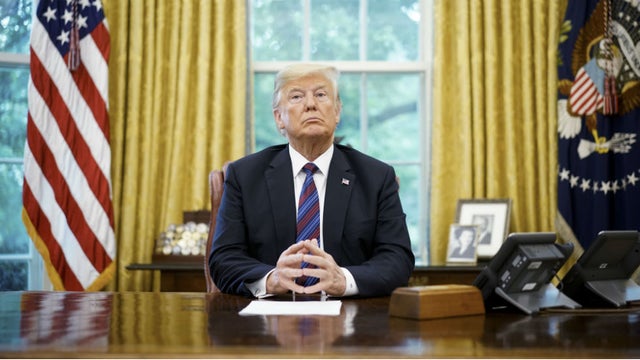 US President Donald Trump said on Friday that he would send some 1,500 soldiers to the Middle East as “protection” amidst a rise in tensions with Iran. At the same time, he downplayed the suggestion of a military conflict.

“We want to have protection in the Middle East,” he said. “We’re going to be sending a relatively small number of troops, mostly protective.”

“Right now, I don’t think Iran wants to fight. And I certainly don’t think they want to fight with us,” Trump said, adding, “but they cannot have nuclear weapons.”

Rhetoric between Tehran and Washington has become increasingly hostile since Trump imposed new sanctions on Iran in the past few weeks, with the aim of forcing Iran to renegotiate the 2015 nuclear deal which the president pulled the US out of.

Earlier this month, the US moved bombers, Patriot missiles, and a carrier strike group to its Middle East bases.

The Pentagon said the troop movement was in response to several incidents it believes were caused by the Iranian government. This includes a rocket attack in Baghdad’s Green Zone, four oil tankers that were sabotaged with explosives in the Gulf, and a drone attack on a Saudi oil installation.

“We view this as a campaign,” said Vice Admiral Michael Gilday, director of the Pentagon’s Joint Staff.

“We think that through a combination of a very measured deployment of assets as well as public messaging, we are again trying to underscore that we are not seeking hostilities with Iran.”

A Russian legislator on Friday warned that Moscow might raise the topic of the US deployment at the next meeting of the UN Security Council.

According to a Reuters/Ipsos poll published last Tuesday, 64% of Americans — including a large majority of Republicans — support the 2015 deal designed to prevent Iran from acquiring nuclear weapons in exchange for sanctions relief.

Amid the brewing tensions, 51% of respondents indicated that the US and Iran would go to war within the next few years, up 8 percentage points from a poll last June.

Nearly half — 49% — of all Americans disapprove of how Trump is handling relations with Iran, the poll found, with 31% saying they strongly disapprove. Overall, 39% approve of Trump’s policy.

At the same time, 54% of Americans view Iran as a “serious” or “imminent” threat.

Iran responded on Monday with defiance. Foreign Minister Javad Zarif said in a tweet that Trump would fail to destroy the country, just as Alexander the Great and Genghis Khan had in the past.

In another tweet, Zarif said what he called the “B Team” — a group of anti-Iran hard-liners that includes US National Security Adviser John Bolton, Israeli Prime Minister Benjamin Netanyahu, and Saudi Crown Prince Mohammed Bin Salman — was empowering the very military-industrial complex that Trump claims to oppose.

Tehran has also downplayed the threat of open conflict with the US, with Zarif saying Saturday that Tehran was not seeking armed escalation with the US or its regional allies.

“We are certain,” Zarif said. “There will not be a war since neither we want a war nor does anyone have the illusion that they can confront Iran in the region.”

However, a commander of Iran’s elite military organization, the Revolutionary Guard, offered a different message on Sunday.

US soldiers would be “easy to defeat,” said Commander Hossein Salami in a statement.