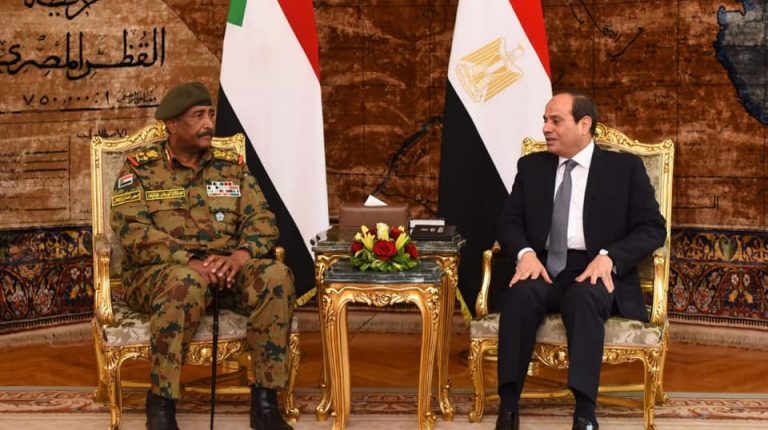 In a meeting held late Saturday, Al-Sisi voiced support to the Sudanese people’s free will, and their choices to draft the future of their country.

Furthermore, Al-Sisi also asserted his country’s keenness in supporting Sudan with all means to overcome this period, in line with the expectations of the Sudanese people and without foreign intervention, the statement added.

For Burhan, he praised Egypt’s readiness to support the Sudanese people as well as their efforts to back their choices to maintain stability and security in the country, the statement continued.

Burhan’s visit to Cairo came a day after Sudanese protest groups called for a two-day strike starting from Tuesday, as negotiations between the groups and the Sudanese generals got suspended.

In a statement on social media, the Declaration of Freedom and Change Forces announced that protesters will be on a strike on Tuesday and Wednesday, 28-29 May to achieve the goals and the demands of the Sudanese revolution.

The alliance said that strike is a peaceful resistance which aims to achieve the revolution and hand over the power to a civil-led government.

Egypt, which previously voiced support to the Sudanese Military Transitional Council, hosted a summit last month on Sudan and Libya with the participation of regional partners. African nations at that time called on the African Union’s Peace and Security Council to extend the period granted for the ruling Military Council to hand the power in Sudan to a civilian government for up to three months.