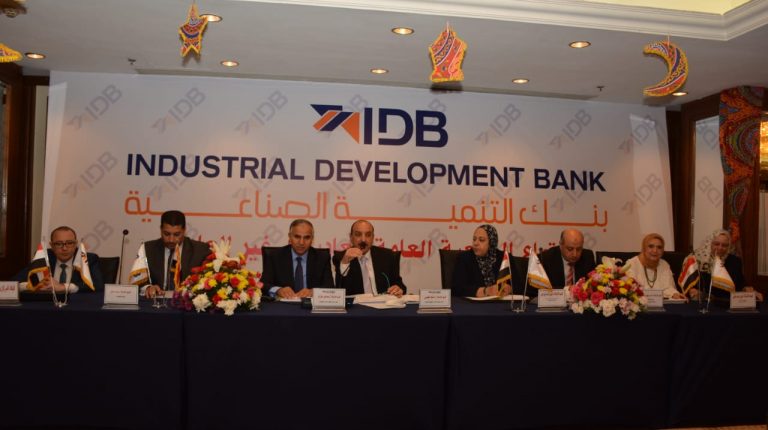 The general assembly of the IDB approved the balance sheet and financial statements for the year ended 31 December 2018. The shareholders also approved the report of the board of directors in respect of all the work and the developments witnessed by the bank during the past year, which showed the highest growth and profitability rates in the bank’s history.

“At the end of December 2018, the customer deposits portfolio stood at EGP 18.9bn, compared to EGP 14.1bn at the end of 2017, an increase of EGP 4.8bn, and a growth rate of 34%. This is an unprecedented figure in the bank, making it one of the leading banks in this file,” Fahmy said.

Moreover, the IDB’s chairperson and managing director pointed out that the bank has attained many achievements in 2018, including the completion of the administrative and financial structure and the modernisation of the administrative system of the bank through a global company specialised in this field, pointing out that the number of employees in the bank declined to 751 employees, compared to 906 employees in 2017.

Over and above, he added that the bank has also succeeded in reconciling with the Egyptian Tax Authority and settling outstanding amounts since 2008. The bank paid about EGP 42.5m from claims worth EGP 146m.

According to Fahmy, the bank has embarked on the implementation of the plan to build and develop its IT system, believing that technology is a key driver for successfully improving and enhancing the value of the bank’s services to its customers and providing more efficient services.

The IDB injected EGP 300m during the previous period in order to equip the technological infrastructure of the bank, and aims to pump another EGP 300m to complete this project in the coming period, he pointed out.

Fahmy revealed the bank’s intention to launch the first smart branch which provides banking services using technology before the end of 2019.

In addition, he highlighted that the bank was able to achieve unprecedented growth rates in all its activities and support the country’s strategy in developing the industry as the centre of any progress and prosperity. He referred to that the bank’s interest in industrialisation and agricultural production, upgrading services and industrial projects, expanding these projects to benefit millions and branching out in every part of the country, adding that Egypt began to reap the rewards of the economic reform programme.

“The IDB is interested in the development of technical education, through the support of the Workers’ University and technical and vocational training centres in the republic, in the framework of the president’s keenness to develop technical education in order to meet the needs of the labour market and Arab countries,” Fahmy said.

Regarding financial inclusion, Fahmy said that the bank is keen to provide the opportunity through geographical expansion, noting that the bank is working to spread its branches in the provinces of the republic to become closer to its customers.

He added that the Hegaz branch in Heliopolis and Al Obour Buildings in the Salah Salem branch have recently been opened. The Makram Ebeid branch will soon be opened in Nasr City and Nubar in downtown Cairo, in addition to preparing 11 more branches to reach 50 branches in three years.

Fahmy also emphasised that the bank’s policy in the area of social responsibility is focused on supporting the sectors of education, health, informal housing areas, and combating poverty.

The bank announced that it has donated more than EGP 20m to develop Egyptian villages and Tahya Misr Fund and pay the tuition fees of students who are unable to afford it, in the bank’s belief of the importance of social responsibility, which directly affects meeting of the needs of the Egyptian citizen.

“In order to accommodate the bank’s expansions, create future cadres, as well as new job opportunities, 150 new employees have been recruited in 2018. Their skills range from recent graduates to experienced professionals in line with the expansion plan of the branch network,” he said.

Additionally, he explained that the bank is qualifying and developing its cadres from the first moment of joining the work team, through specialised and professional training courses.

During the bank’s general assembly, Hamdy Azzam, the bank’s vice president, revealed that the IDB aims to finance about 1,000 factories by 2020, as part of its plan to increase the financing small and medoium-sized enterprises (SMEs) in the coming period and to create more than 20,000 jobs.

Azzam explained that the volume of funding will range between EGP 5m and EGP 10m per factory, expected to total the volume of those funds to about EGP 7.5bn.

According to Azzam, the bank’s total funding for SMEs reached EGP 3.5bn by the end of 2018.

He pointed out that the bank injected EGP 1.1bn in funds under the Central Bank of Egypt’s initiative to fund these projects, and EGP 900m are currently under use.

According to Fahmy, the bank is targeting the launch of four credit areas for SMEs this year, bringing the total credit areas to 10 areas by the end of 2019.