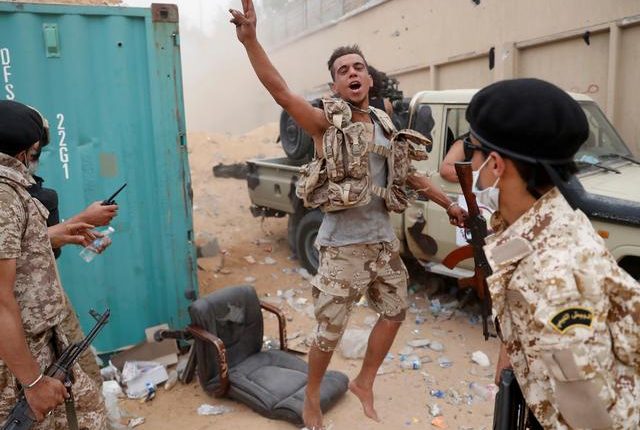 The Libyan capital Tripoli witnessed on Saturday a new wave of fighting between the Libyan National Army (LNA) led by Khalifa Haftar on one side, and the forces affiliated to the internationally recognised government on the other.

Fighting broke out as the LNA launched a new attempt to advance on the city.

Supported by Egypt and the UAE, Haftar has started an attack on Tripoli two months ago, but has so far failed to penetrate the city’s southern defences. The fight in Tripoli has negatively affected the UN-backed efforts to reach a peace deal between rival factions and threatens to further damage the huge oil industry in the North African country.

More than 510 people were killed and 75,000 others were displaced from their homes because of the battle in southern Tripoli.

The World Health Organization (WHO) said that two ambulance men were killed and three were wounded last Thursday after their ambulance vehicle was targeted in the fighting.

Two weeks ago, the UN Security Council called on all parties of the conflict in Libya to commit to the ceasefire resolution and to return to the talks mediated by the United Nations.

The internationally recognised Government of National Accord (GNA) accused Haftar of being a military dictator with ambitions. The Libyan government urged the US President Donald Trump to stop foreign support for Haftar’s assault on the capital.

Head of Tripoli-based GNA, Fayez Al-Serraj, said: “The supporters of Haftar are turning Libya into a proxy battleground which would cause a new wave of mass migration to Europe.”