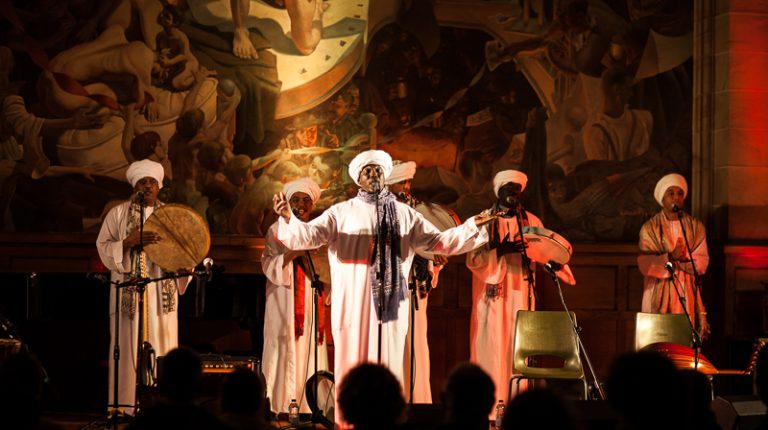 Shortly before Ramadan starts and when you go to the markets to buy the month’s supplies you will notice the “Yamish” table decorations, the lanterns and the background music and songs which are not related in our minds with the holy month, giving us a sense of nostalgia and anticipation for the new month. 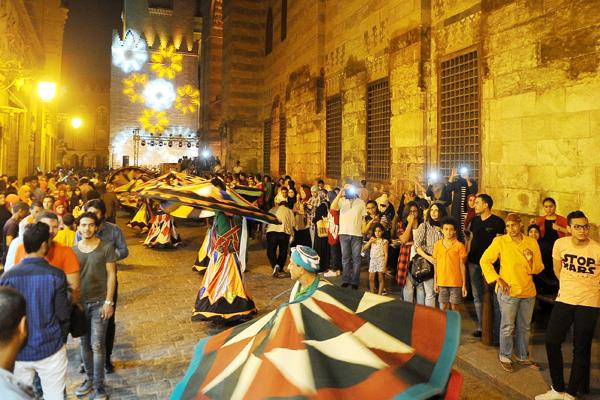 You would never see Ramadan ending without the goodbye songs played everywhere, promising anticipation for the month next year.

You hear the Qur’an recited before Maghrib and the Adhan by Sheikh Mohamed Refaat, who is a distinct feature of Ramadan and has become part of the legacy of Ramadan Tawashih and songs that we never get tired of listening to.

An example is “Mawlay”, a Muwshah written by Abdelfattah Moustafa and composed by the creative Baligh Hamdy. Even though the Sheikh refused to sing a composed piece by Hamdy, however, after the success of that Muwashah, they cooperated in many religious Tawashih afterwards.

All the Ramadan songs initially emerged from the Egyptian radio. Before TV was popular, singing contests were famous on the radio, and it was the sole channel people resorted to in order to make their songs heard by the public. During that same era, the “Wahawy ya Wahawy” song appeared along with the “Ramadan Gana” song.

In 1934, a shy young man from Sharqeya presented his song, and quickly became the famous composer and singer Ahmed Abdelqader, who was one of the first people to join the Egyptian radio.

At that time, 15 minutes were given to each composer to enable them to play three songs for the radio. Before Ramadan arrived in the mid-‘30s, Abdelqader presented three songs, including “Wahawy ya Wahawy,” and “Ramadan Gana.” Officials refused that he would sing them all, so he sang one of them and the other was sung by Abdelmoteleb.

There are many stories on what both words mean, however, the more accurate explanation is that both words originate from the ancient Coptic language, as the words “Wahawy ya wahawy eyaha” originated from “Wah wah Aeyah Aeyah”. It is a statement that means “Long live Aeyah”, who is the mother of Ahmos, after Ahmos managed to beat the Hyksos. Aeyah means “moon” or “crescent”, so Egyptians continued to celebrate the moon every year using the same statement. As Arabs entered Egypt, the statement became part of the Egyptian folklore, eventually becoming part of the famous Ramadan song “Wahawy ya Wahawy.”

We all know these songs by heart, and even non-Egyptian Arabs know them by heart and they still give us a sense of joy; however, some songs are more loved and more related in our minds to Ramadan.

It is said that these two words were first used when Al Moez Le Deen Allah Al Fatimy arrived to Cairo after it was built by Gawhar Al Saqally. When he entered the city, it was during Ramadan, so children sang “Hallo ya hallo” which means “We wants sweets”. Children continued to sing the song over time, making it a habit in Ramadan.

The lyrics of Ramadan Gana tell us that Ramadan is approaching. They are written by Hussein Tantawy and composed by Mahmoud El Sherif. Even though many years have passed and the form of singing changed as well as public taste, this song remains a ritual of celebrating the month of Ramadan.

When Ramadan is about to arrive, this song can be heard everywhere with “Ramadan Gana.”

“Marhab Shahr El Soum” was released in 1966. It is one of the most beautiful songs to welcome the holy month, written by Mohamed Ali Ahmed, and composed and sung by the late Abdel Aziz Mahmoud.

Written and composed by the great late artist, Mohamed Fawzy. In our minds, it is strongly related with the celebrations of Ramadan and buying lanterns for children, decorating homes, and streets. This song is a Ramadan classic that Egyptians have been significantly attached to. Written by Nabila Qandil and composed by Ali Ismail, the song reflects the happiness of Egyptians, whether adults or children, with the month of Ramadan.

Among the songs celebrating the arrival of Ramadan and praising its days, Sabah and Fouad El Mohandes came up with this song which carries humour and reflects the habits of Egyptians during the month. It describes the tables of Egyptians in Ramadan in a comic way. The song was written by Hussein El Sayed and composed by Mohamed El Mougy.

Even though this is not a song in a traditional way, it is one of the main heritage songs that enchants us in Ramadan, composed and performed by Sayed Mekawy. The lyrics are by Fouad Haddad.

These are songs that live in us and are loved by the people for their great correlation with Ramadan.

In the last 10 days of Ramadan and with the preparations of Eid, you will find the songs of Ramadan taking a different form and characteristic, with more sadness about the end of Ramadan. Some of these songs would include the following:

This song was sung by Mohamed Roshdy, written by Mohamed El Shahawy, and composed by Hussein Fawzy. It is one of the most beautiful Ramadan songs.

Wallah be Oudah ya Ramadan

A song by Mohamed Kandil, stating how much Ramadan is loved by Egyptians and how they miss it. Its lyrics recall lovely nostalgic feelings.

In the last days of Ramadan near Eid El Fitr, this is the song that takes over, telling people Ramadan is ending very soon. It is sung by Sherifa Fadel, and known by heart by all Egyptians.