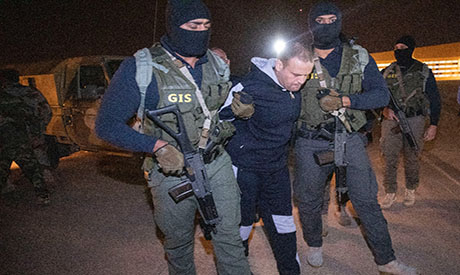 Al-Ashmawi was seen escorted by two General Intelligence Services agents as he arrived from Libya on board an Egyptian military aircraft. The extradition took place after a meeting between the head of Egypt’s General Intelligence, General Abbas Kamel, and the Commander of the Libyan National Army (LNA), General Khalifa Haftar, at the LNA headquarters in Al-Rajma village, eastern Libya.

Another militant Bahaa Ali Abdel Moa’ti was also extradited to the Egyptian authorities. Local news reported that he was Al-Ashmawi’s personal guard.

President Abdel Fattah Al-Sisi hailed the operation. “A salute and appreciation to Egypt’s brave men who have always acted as hawks against all those who thought that they can terrorise the Egyptians,” Al-Sisi said on Twitter.

“These heroes have taken an oath to protect the homeland. A salute to those who carried the shield in the time of defence and the sword in the time to attack.”

“The war on terrorism has not ended and will not end until the right of every martyr who died for the sake of the nation is restored. Egypt lives by its men,’ Al-Sisi added.

Al-Ashmawi is considered extremely dangerous, as he is a former special forces officer, and was one of Egypt’s most wanted jihadists, as he formed the Al-Murabiteen group, which was reportedly a cell formed within the currently operating Sinai Province militant group. However, Al-Murabiteen detached themselves from the Sinai Province, and pledged allegiance to the regional radical Al-Qaeda group.

Egypt has been battling several armed groups, concentrated mainly in the Sinai Peninsula, since the ouster of Islamist former President Mohamed Morsi in July 2013. Since then, shootings that targeted security personnel and state officials have become a near-weekly occurrence in Egypt.

Al-Ashmawi is suspected to have been behind several high-profile attacks against the Egyptian state, including a massacre of military personnel in Sinai, known as the Al-Farafra attack in 2014.

Some speculations also argue that Al-Ashmawi was the mastermind behind the assassination of Prosecutor-General Hisham Barakat in a Cairo explosion in 2015, the first of its kind of a top state official since 1990.

However, over a dozen defendants were tried and sentenced to death for this incident, while Al-Ashmawi was not mentioned in this case. Additionally, he was accused of executing the Al-Farafra attack, and is currently being tried in absentia.

Al-Ashmawi is also speculated to have been involved with the militant group Ansar Al-Islam, which claimed responsibility for Al-Wahat shoot-out on 20 October 2017.

During a talk with military personnel in Cairo, President Abdel Fattah Al-Sisi said on Thursday that the Egyptian state wants to retrieve officer-turned-militant Hisham Al-Ashmawi in order to hold him accountable for the crimes he committed.

Al-Sisi said so during a comparison between Al-Ashmawi and another officer named Ahmed Al-Mansi who was killed in action during clashes with militants in North Sinai.

“The difference between Al-Ashmawi and Al-Mansi, is that one was confused and might have committed treason, but the other offered his life to protect the country,” the President said.