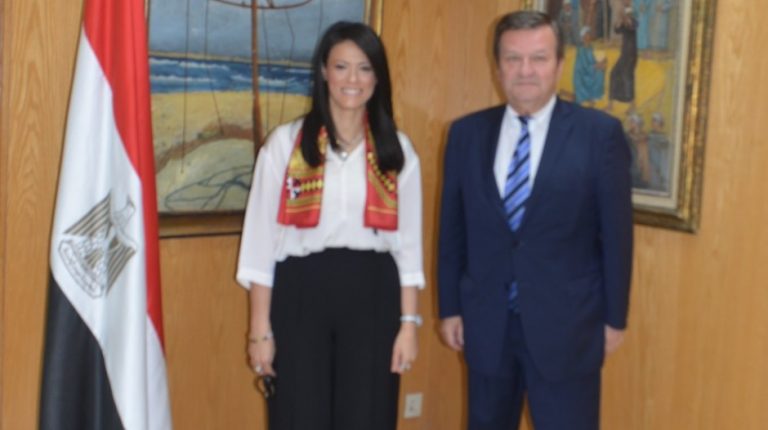 Ukraine came in second place in the list of top 10 exporters of tourism to Egypt in 2018, according to Minister of Tourism, Rania AL-Mashat.

During 2018, the number of tourists coming to Egypt reached 11.346 million, who spent 121.497 million tourist nights, according to a statistic on the tourism movement to Egypt issued by Economic Strategist at the United Nations World Tourism Organization (UNWTO), and professor of macroeconomics and tourism economics at the University of Frankfurt, Said El-Batouty.

Furthermore, the minister spoke about the Ukrainian market and its importance to the Egyptian tourism as one of the most important and most developed markets for Egypt.

AL-Mashat’s remarks came during her meeting with the Ukrainian ambassador to Egypt, Yevhen Mykytenko in Cairo.

During the meeting the two sides discussed cooperation aspects between both countries in the field of tourism, with the aim of boosting tourism between  Ukraine and Egypt.

For his part, the ambassador pointed out that Egypt is considered one of the most important countries for the Ukrainian tourist.

The ambassador invited Al-Mashat to visit  Ukraine to hold an Egyptian-Ukrainian tourism meeting for affairs with the Deputy Minister of Economic Development and Trade of Ukraine who is responsible for the tourism file, in addition to holding a series of meetings with Ukrainian senior officials to boost the tourism movement between the two countries.

In that context, the minister stressed her readiness to visit Ukraine and her keenness to meet the Ukrainian side and listen to their proposals to increase the tourism movement between the two countries.

Furthermore, the ambassador also presented a proposal for cooperation through the implementation of a joint technical project to draw artistic designs on large buildings in the main streets by Egyptian and Ukrainian artists, similar to the project in the Ukraine, which was admired by the tourists.

Al-Mashat welcomed this idea and discussed the possibility of implementing it, explaining that this idea is in line with the ministry’s People to People (P2P) campaign, which portrays Egypt not only as a prime touristic destination, but will also shed light on the diversity of the Egyptian people by showcasing Egyptians who master various disciplines which include art, sports, music, and culinary activities.

In addition, on one hand, the P2P campaign intends to shift tourists’ perception, and encourages community engagement on the other hand.