Egyptian banks are expected to record a strong loan growth of 22.5% during 2019 as macroeconomic conditions improve and lower interest rates boost demand. Simultaneously, government’s share of total loans will remain sizeable, but decline gradually in the medium term, as its austerity drive progresses and private sector activity picks up, according to Fitch Solution “Africa Monitor, North Africa” June 2019 report issued on Tuesday.

Haftar appears to be either looking to expand and consolidate his territorial control, or pressure the rival Government of National Accord in Tripoli into political concessions.

Daily News Egypt took a dive into the report, to understand the latest economic and political risks for the North African region. 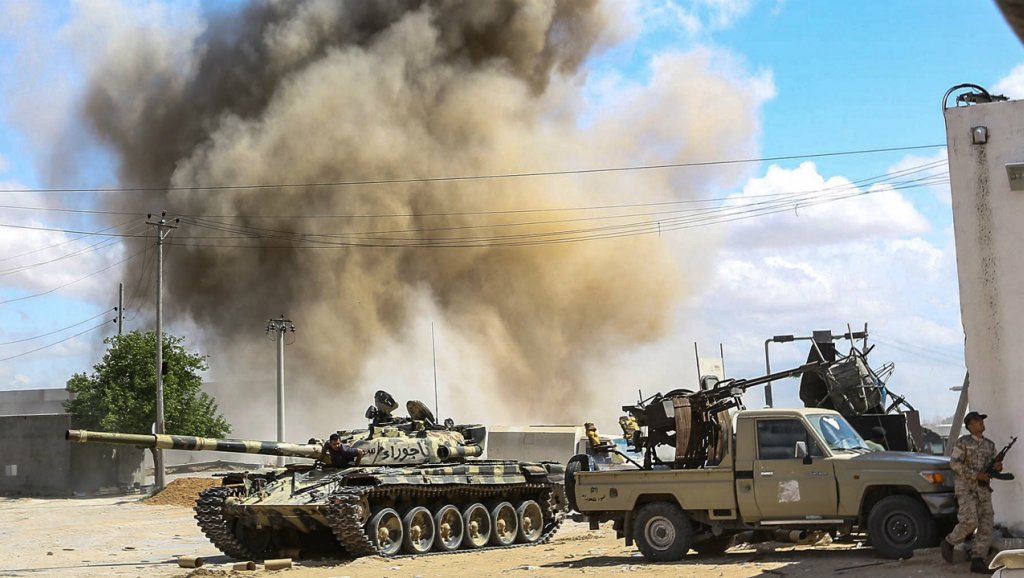 Fitch believes that Egyptian banks look set to record strong loan growth over 2019, due to the witnessed improvement in macroeconomic conditions, with declining inflation easing pressures on local households and businesses, and a more competitive exchange rate boosting exports.

Regarding monetary policy, the report cites that the Central Bank of Egypt (CBE) has resumed its monetary easing cycle, cutting interest rates by 100 basis points (bps) at its latest policy meeting on February 14, 2019, with the aim of boosting credit expansion to promote private sector activity.

The report forecasts that CBE will pause its easing cycle around mid-2019 to allow for the inflationary impact of subsidy cuts to feed through, consequently, the agency revised their forecast for Egyptian banks’ loan growth to 22.5% in 2019 from the previous 18.1%.

This also reflects the steady acceleration in loan growth seen over the second half of 2018, from 15.3% year-over-year (y-o-y) in July to 22.8% at the latest reading in November.  “We nevertheless continue to highlight

risks of global financial volatility returning and higher oil prices, which could yet return a hawkish bias to the CBE’s policy trajectory,” the report indicates.

Over the medium term, Fitch notes that the government is looking to introduce a new tax law on sovereign debt holdings, which could weigh on banks’ interest margins unless they divert a greater share of their liquidity toward loans. This may serve to encourage loan growth in the years ahead, should demand from high-quality borrowers pick up sufficiently to facilitate such a shift.

In November 2018, several reports about a proposed change to how banks account for their income from government debt, and that the new tax method will require accounting for income from treasuries as part of taxable income, which would result in banks having to reallocate costs to match revenues. 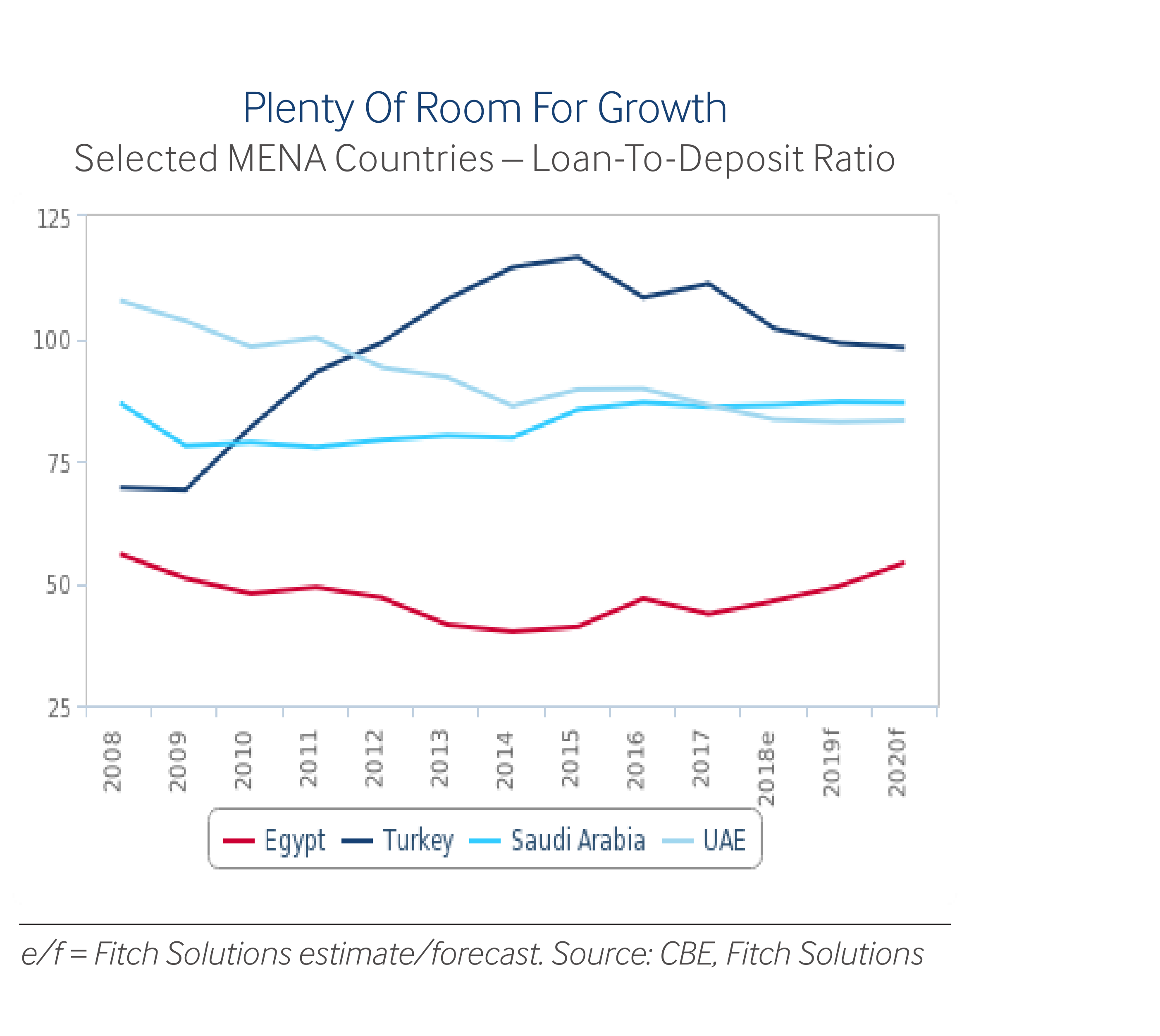 According to the report, the government’s share of total loans will remain sizeable, but decline gradually in the years ahead. Crowding out of the private sector remains an issue as credit demand from the government, which accounted for 30.9% of total loans in November, remains strong. The growth in loans to the government averaged 36.5% in the first 11 months of 2018, as the fiscal deficit looks set to narrow only gradually.

pace. Meanwhile, we believe private sector loan growth will pick up significantly as cost pressures ease, borrowing costs reduce, and the government continues to invest heavily in infrastructure. Credit extension to industry, trade, services, and households rose by 8.0%, 27.4%, 9.7% and 18.6% respectively in November 2018, suggesting this dynamic is already playing out,” the report adds.

Furthermore, deposits will also expand, although at a slower pace than loans. Strong economic activity and falling unemployment, coupled with lower inflation, will boost Egyptians’ real incomes and likely raise saving rates. We highlight that much of the population still remains unbanked, which means there is substantial room for organic growth in lenders’ deposit bases over the coming years.

It is estimated that around 10%-15% only of the Egyptian population are banked – though, a higher rate in the range of 30-35% is estimated when taking into account individual savings at post offices.

The CBE’s easing cycle will cap gains to some extent; however, Fitch expects the pace of cuts to be gradual, keeping real rates relatively attractive in the near-to-medium term. Overall, the agency forecasts deposit growth at 15.0% in 2019, marking a slight increase from an estimated 14.5% in 2018.

Consequently, a gradual increase in Egypt’s loan-to-deposit ratio is to be expected, however, at an estimated 45.8% in the third quarter (Q3) of 2018, and this remains among the lowest levels regionally.

Concerning banks’ asset quality, the report indicates that it has remained relatively high, despite a

challenging macroeconomic environment. Non-performing loans (NPLs) stood at 4.4% of total loans as per the CBE data from Q3 of 2018, having fallen from 11.0% in 2011 (partly the result of NPL write-offs).

In terms of foreign exchange (FX) exposure, Fitch believes that Egyptian banks have limited exposure to currency risks, with foreign assets accounting for less than 10% of the total. Meanwhile, the overall capital adequacy ratio of Egyptian banks has improved from 14.0% in December 2016 to 15.6% in June 2018. 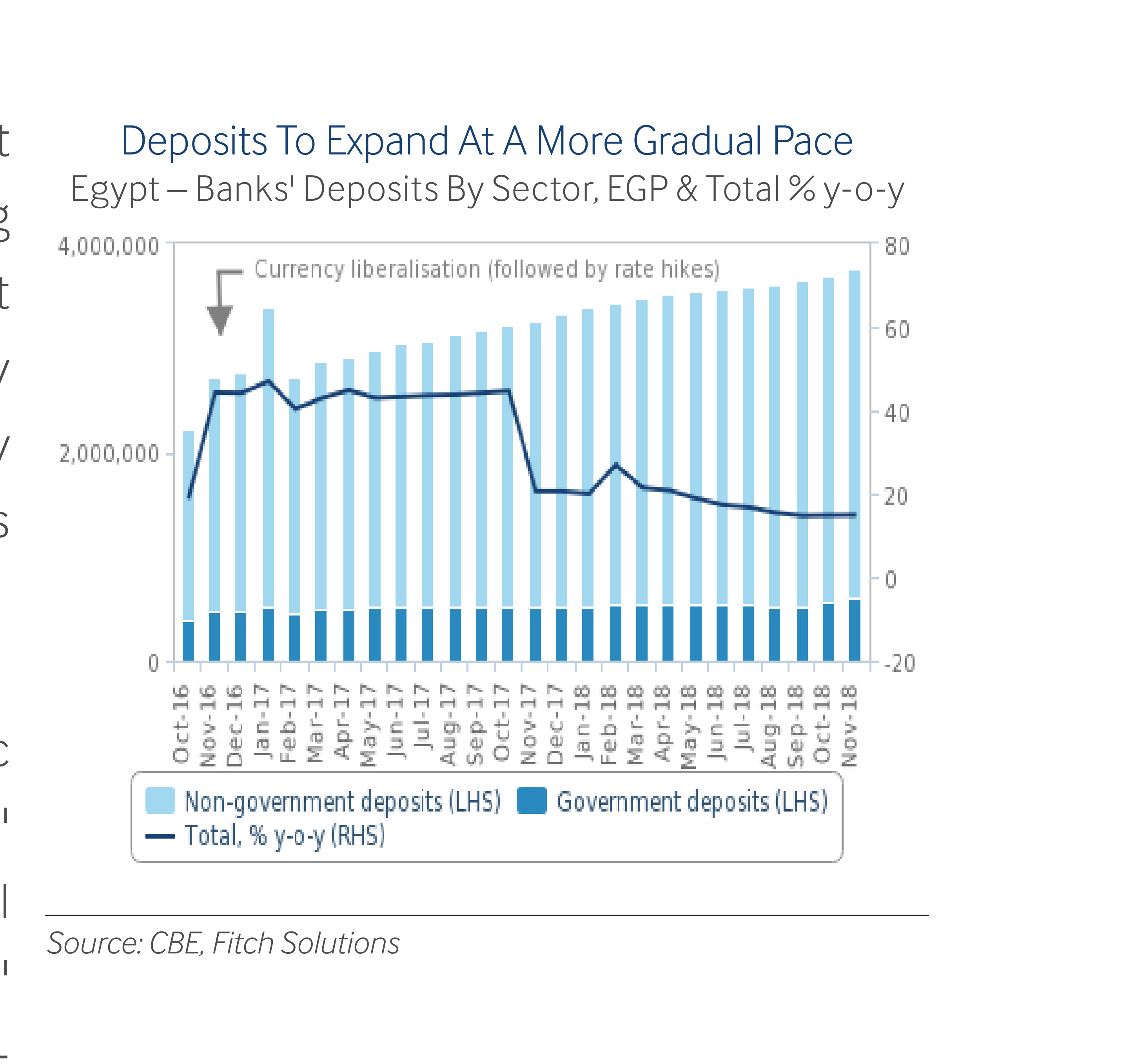 The report forecasts that the Egyptian pound is likely to remain fairly stable in 2019 amid robust economic growth, an improving external position, and still-attractive real interest rates.

In the short-term (three-to-six months) the report indicates that the pound appreciation against the United States dollar in recent weeks as a result of reduced global financial volatility and renewed foreign interest in Egyptian debt. We expect the unit to remain fairly stable over the next few months amid slowing global financial tightening and reduced fears of a global growth correction.

However, Fitch foresees that as the CBE has now phased out its repatriation mechanism, which previously had served to limit exchange rate volatility. Consequently, somewhat greater movement in the pound moving forward is expected.

On the long-term, the agency retains our view for relative pound stability throughout the next six-to-24 months. While the CBE’s likely resumption of its monetary easing cycle will put downside pressure on the unit, we highlight that the pace of cuts is likely to prove gradual, keeping real rates relatively attractive.

The report cites political instability as a downside risk to Egypt’s ongoing economic recovery, and by extension, the value of the pound.

“While not our core view, popular unrest could spread as a result of still-challenging conditions for Egyptian households and businesses and continued political repression. In turn, this could deter tourists from travelling to the country and also discourage the government from implementing further fiscal consolidation measures. The latter would weigh on business confidence, foreign investment, and dollar inflows, and thus cause faster-than-expected depreciation of the pound. In addition, large-scale outflows of portfolio investments remain a concern in the event of a global growth correction and resultant ‘risk-off’ sentiment,” said the report.

The report explains that Haftar appears to be either looking to expand and consolidate his territorial control, or pressure the rival government of national accord (GNA) in Tripoli into political concessions.

Should Haftar be aiming for sustained territorial expansion, then risks of conflict escalation would heighten dramatically – both in the capital and elsewhere, where LNA forces may now be stretched too thin to fight off rival militias.

Despite the ongoing conflict, Libya’s fiscal deficit will gradually narrow over the coming quarters supported by higher oil revenues (as recorded by the Tripoli-based authorities). The majority of Libya’s tax revenue comes from oil and there is limited scope for any non-oil revenue increases.

Concurrently, oil prices are set to continue heading higher. The decision by OPEC+ to cut 1.2m b/d of supply as of January 2019 will help maintain a floor under Brent and set the stage for gains in the new year.

As such, our Fitch oil and gas team forecasts Brent to average $75 per barrel (/bbl) for 2019, implying significant gains from current spot price levels of around $60/bbl.

According to the report, the main driver is the widening of the goods trade deficit on the back of

weak external demand and a rising import bill, which would be mitigated by tourism and remittances.

Furthermore, Fitch expects Morocco’s current account deficit to grow in 2019 to 5.1% of the GDP, mostly

on the back of a widening goods trade deficit. This would be noticeably larger than our 2018 estimate of 4.0% of the GDP, but somewhat below the 10-year historical average of 5.6% of the GDP.

“We at Fitch Solutions have revised down Morocco’s 2019 and 2020 growth forecasts to 2.9% and 3.2% respectively, from 3.3% in both years, on the back of a deteriorating growth outlook for the Eurozone,” the report indicates.

According to the report, the move follows over a month of widespread protests across the country, which began in response to the president’s decision to run for a fifth term in office. Protests have since evolved into a wider expression of disapproval of the ruling elite, composed of an opaque mix of military and business leaders, as well as the president’s close circle of the ruling elite.

Fitch solutions forecasts that Bouteflika’s accelerated exit may have been the result of growing pressure from the military leadership, with army chief of staff General Ahmed Gaid Salah having repeatedly called for the president’s resignation over the past week, rather than signalling intensified rivalry between the military leadership and the executive branch of government.

Therefore, they believe the move points to continued relative cohesion within the political elite, who appears to be looking for a way to grant just enough concessions to placate protesters, while still maintaining control over the post-Bouteflika political transition.