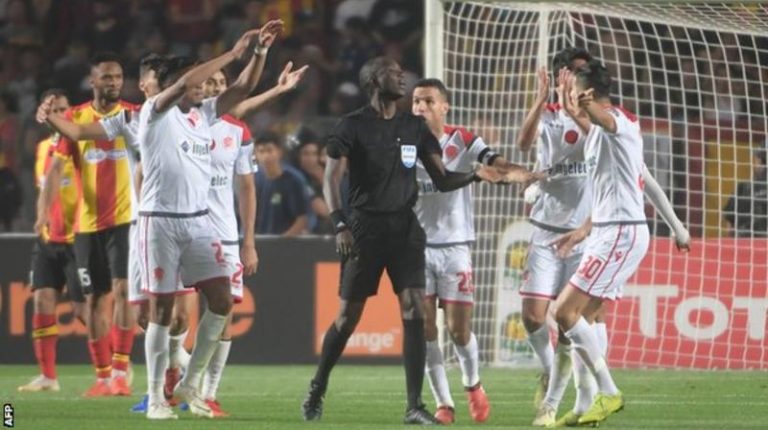 The African football represented by the Confederation of African Football (CAF) took a hefty blast after the controversial Champions League final between ES Tunis and WAC Casablanca.

Amid embarrassing scenes in Tunis, home side Esperance were declared winners of the African Champions League but it took a stoppage of an hour and 25 minutes before the match was abandoned and they could claim the trophy.

The CAF have called a meeting of their executive committee for Tuesday to discuss the incident, it said in a statement on Saturday.

Wydad, who were 2-1 behind on aggregate, thought they had equalised just before the hour mark but the header from Ismail El Haddad was disallowed.

Wydad players immediately surrounded the referee demanding he review the decision and consult the Video Assistant Referee (VAR), which was being used for only the fourth time in an African club competition game.

Surprisingly, the Gambian referee Bakary Gassama said the VAR was broken. Tunisian media reported that officials were aware before the match that the VAR system was not working, but the players seemingly did not know.

CAF officials and President Ahmad Ahmad walked into the pitch in an attempt to deal with the issue. They spent almost 30 minutes in discussions with officials in a futile effort to get the game restarted.

Finally, the referee announced that ES Tunis won and Wydad was considered withdrawn.

Saïd Naciri, president of Wydad, settled on resorting to FIFA, stressing that his team did not withdraw.

He added that Wydad will file a lawsuit at the Court of Arbitration for Sport and will take all legal measures to prove the violations occurred in the Champions League final.

“We told the CAF that we want to resume the match, however, the VAR should have been consulted over our cancelled goal. This shows bad intentions and we will take all legal measures against that,” Naciri said.

Meanwhile, ES Tunis said they are not responsible for VAR system failure and that they deserved the trophy.

The Tunisian team explained to the media that CAF is the party responsible for VAR system and that the referee is the only person who has the right to consult VAR.

The incident showed the weakness of the CAF head who failed to contain the situation, and as the match ended, Tunisian fans threw fireworks onto the pitch.

French L’Equipe said ES Tunis won the title in an atmosphere that is far from being sportive.