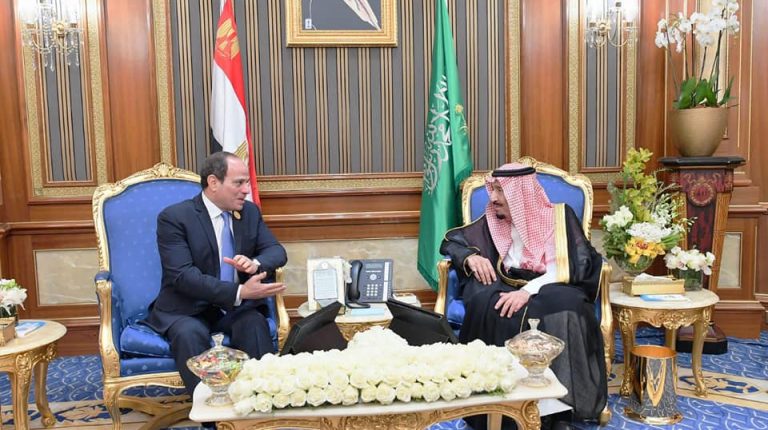 President Abdel Fattah Al-Sisi reiterated that the security of the Arabian Gulf is part and parcel of Arab national security and is closely linked to Egypt’s national security, he told Muslim leaders gathered in the holy city of Mecca for a meeting of the 57-member Organization of Islamic Cooperation (OIC).

It was the third and final summit that drew political figures and heads of state from countries in Africa, the Middle East, and Asia, however, it was marked by the absence of Iran and Turkish President Recep Tayyip Erdogan.

The OIC summit was held under the theme “Hand in Hand toward the Future.” The summiteers are scheduled to address a slew of regional and international issues, topped by the Palestinian cause, the crises in Syria, Libya, Yemen, Sudan, Somalia, and Afghanistan in addition to Islamophobia, challenges facing Muslim minorities, extremism and counterterrorism efforts plus a wide range of political, cultural, economic, scientific, social, and other matters of concern to the OIC’s 57 member states.

Addressing an Arab summit that commenced at the Al-Safa Palace in Mecca, he said that this extraordinary Arab get-together is being convened amid unprecedented serious threats facing Arab national security, most particularly the security of the strategic Gulf region.

Al-Sisi added that any threat to Gulf security, and subsequently Arab national security, requires all Arab nations to take a firm, wise, and decisive stand to confront it.

Firmness is a must to deliver home a message to everyone in the world far or near, that Arabs will never accept any threat to their national security and will never tolerate any encroachment on any of their rights, he also stated.

Showing wisdom is also required in order to contain any tension and prevent matters from exploding for Arabs who have and will always be strong advocates of world peace and stability, he continued.

President Al-Sisi presented to Arab leaders a four-point Egyptian vision on the way to handle the threats to Arab national security, saying that the Houthi attacks which recently targeted Saudi oil installations, the repeated rocket-firing targeting Saudi cities and the acts of aggression targeting navigation in the UAE territorial waters are plain and clear acts of terror that should be vehemently condemned by the world community.

He stressed that these acts of terror require from the world community to take action to punish their perpetrators and ensure that they are never ever repeated so as to avoid putting Arab national security and international peace and security at any risk.

The president also demanded from the world community to shoulder its responsibilities and urged Arab nations to reactivate their counter-terrorism mechanisms and consolidate their own terror-combat capabilities.

He pointed out as well that these latest terrorist threats to Arab national security require from Arab nations to take quick and solid measures in order to develop their capabilities to be able to respond to any attempt which may harm their interests.

Furthermore, he noted that the second point of the Egyptian vision lies in the need to address the root causes of regional instability and adopt sound crises-management strategies while supporting Saudi Arabia and the UAE in the face of any threat to their national security.

Elaborating further, Al-Sisi said that the third point is connected with the major sources of threat to regional security, noting that stability can never be achieved in the region without realising a comprehensive solution to the Palestinian problem which meets the legitimate aspirations of the Palestinian people, including those of having independence, ending the occupation, and establishing their own sovereign state on the 1967 borders with east Jerusalem as its capital.

In addition to this, he added, clear-cut solutions must be envisaged to the crises in Syria, Libya, and Yemen to enable these Arab countries to restore their unity and sovereignty and fulfil their people’s hopes to live in freedom and enjoy a decent stable life away from wars, sectarianism, foreign interference, harmful ambitions, hegemony, and domination attempts by outside powers.

As for the fourth point of the vision, Al-Sisi summarised it in the need to take a firm stand against any attempts by regional and foreign powers to interfere in Arab internal affairs.

He called for being candid and resolute in standing up to any regional or Arab party which tries to interfere in the internal affairs of any Arab country.

“Our meeting here today is meant in the first place at sending a clear message that we stand by our brothers in Saudi Arabia and the UAE and emphasise our determination to adopt a comprehensive Arab national security strategy,” he said.

“These subversive terrorist acts are aimed not only at the kingdom and the Gulf region, but also at the security of navigation and energy supplies to the world,” he said.

Salman opened the summit, which began after midnight Friday and ran into the early hours Saturday, due to evening prayers and day-long fasting during the holy month of Ramadan.

In his opening speech, the king urged Muslim leaders to fight the sources and funding of terrorism around the world.

The Saudi king told those present that Iran was responsible for the alleged attack on four oil tankers off the coast of the UAE in May. He warned that such actions represented a “grave danger” to the security of maritime traffic and the region.

Salman also blamed Iranian-backed terrorist militias of being behind a subsequent drone attack on a Saudi oil pipeline.

The monarch’s comments follow United States National Security Advisor John Bolton’s visit to the UAE on Wednesday, where he said that Iranian naval mines were “almost certainly” responsible for the attack on the four ships.

Saudi Arabia’s effort to bring leaders to Mecca is indicative of the kingdom’s desire to form a unified Muslim and Arab front which can help isolate its arch-rival Iran on the international level.

Iranian Foreign Ministry spokesperson, Abbas Mousavi, criticised the kingdom’s position, saying that Tehran regretted “Saudi Arabia’s abuse of its privilege as the host” of the OIC “to sow division between Islamic and regional countries.”

But in its final statement, the OIC followed Riyahd’s cue and condemned a “terrorist attack” on Saudi Arabia’s oil pumping stations.

The group also denounced what it called “sabotage operations” against four vessels off the coast of the UAE, saying that it threatened international maritime traffic safety, the statement read.

President Al-Sisi was posted by Colonel Turki Al-Maliki, the spokesperson for the Saudi-led Coalition to Support Legitimacy in Yemen, on the details of Iranian acts of aggression against the Saudi kingdom and was shown the debris from some missiles used in the attacks on the kingdom’s territory which are being held by the coalition as evidence linking Iran to the hostile operations.

He was welcomed at King Abdulaziz International airport in Jeddah by the Saudi monarch’s Adviser and Governor of Mecca, Prince Khaled al Faisal, along with a number of senior Saudi officials.