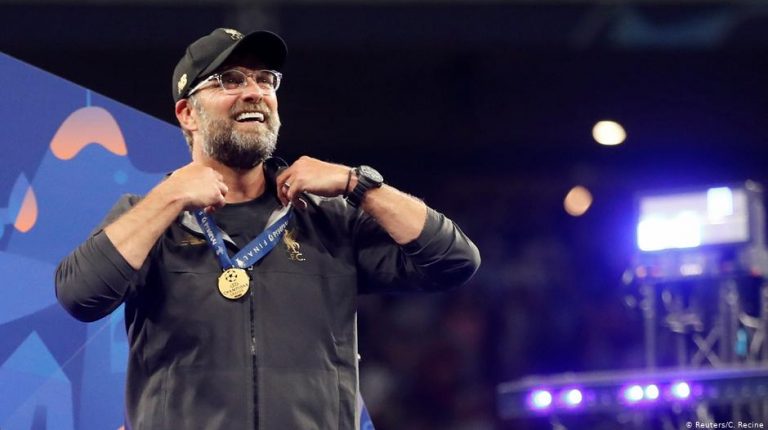 Jürgen Klopp’s reputation was forged by his relentless pursuit of an intense, committed and entertaining style of play. But DW’s Matt Pearson saw the German boss break his trophy drought using other qualities in Madrid.After six finals, two clubs and eight years, it turned out that what Jürgen Klopp really needed was a performance lacking the signature style that helped the German become one of the best coaches in the world. And an obliging, overawed opponent.

Liverpool deserved to win European club football’s greatest honor for the sixth time but only by virtue of being the best of a bad pair in a 2-0 win. In contrast to the way both teams arrived at this stage, this was a game that failed to really hold the attention for long stretches despite its importance. Simple passes went astray, attacking moves floundered under little pressure and even those in the stands couldn’t muster real enthusiasm until the closing stages.

“Did you ever see a team like this? Fighting with no fuel in the tank any more,” Klopp said after the game. “This may be the best night of my life, professional wise.”

The former Borussia Dortmund boss said he was calmer than he’d expected in the circumstance as he entered his post-match press conference with a beer in hand, joking about a phone call from Pep Guardiola and the 2020 final in Istanbul.

“Usually I would sit here and have to explain why we lost this game but this time I’d love to explain it,” he beamed.

The 51-year-old has admitted there were times in his run of final defeats where he felt fortune had deserted him and his teams. But he could have few such complaints about a penalty so early in the game that most of the stadium was still trying to rid themselves of the memory of the opening ceremony.

Moussa Sissoko picked an odd moment to start directing traffic in his own penalty box but the handball decision looked a touch generous given Sadio Mane’s cross struck the Spurs player’s chest first. Even if by the letter of the law the decision may have been correct, the nature of its creation owed little to skill.

Both sides below their best

Even if the manner of their lead was questionable, the Reds never really looked like relinquishing it in a lethargic game. Whether it was a result of the sweltering heat, the occasion, the break between games or dramatic fatigue from the semifinals, the opening 45 minutes saw the advertising hoardings get on the end of more crossfield balls than the wide players and the lowest pass completion rate of any half in the Champions League this season.

Liverpool were the guiltier of the two sides when it came to squandering possession early, completing just 101 passes before the break, with less than 70 percent finding their man. Perhaps the heat that turned the city’s subway trains in to sweaty, lager-drenched tin cans in the hours before kickoff had sapped the usual intensity from Klopp’s men. There was none of the ferocious commitment and decisive power that saw them roar back past Barcelona to reach Madrid.

In contrast to his usual frenetic encouragement on the touchline, Klopp often seemed keen to calm his charges, imploring Andy Robertson not to get involved in a tussle with Kieran Trippier and refusing to get frustrated with the stodgy affair on offer in front of him.

As the second half wore on, a broadly similar – if slightly more entertaining – game developed but just as Spurs began to at last build up something approaching a head of steam, the valve was slammed shut. By Virgil van Dijk’s timing, by Alisson’s safe hands, by Andy Robertson’s recovery pace or by Spurs’ lack of conviction in attacking areas.

After a season where he’s managed to tease out a level of consistency achieved by precious few teams in addition to the sort of foot down, windows open football that got them past Barca and Bayern Munich, perhaps it’s fitting that Klopp’s miserable finals run came to an end with a performance of grit and granite rather than skill and silk.

Perhaps it was also fitting that the man who secured the win was a man whose career has been resurrected by the Liverpool boss. After an underwhelming season on loan at Wolfsburg, Divock Origi’s Anfield days appeared to be numbered. But after the Belgian swept in the second in Madrid, that made it the winner in the Merseyside derby, the Champions League semifinal and the Champions League final for the striker. For all the attention on Klopp’s tactical innovations, the way he builds relationships may well be his greatest strength.

“He’s a fantastic manager, first and foremost but he’s a fantastic human being as well. How he handles us as players at that games and outside of the games is outstanding. It’s a pleasure to work with him,” said man of the match Van Dijk.

It certainly felt that way at the end, when the team he built lifted their coach aloft. The players then allowed him to lead the fans behind the goal in celebration before jogging over to those elsewhere in the ground and finally doffing his baseball cap in a sign of respect. It’s more than mutual. They love him for more than trophies, but they certainly help.