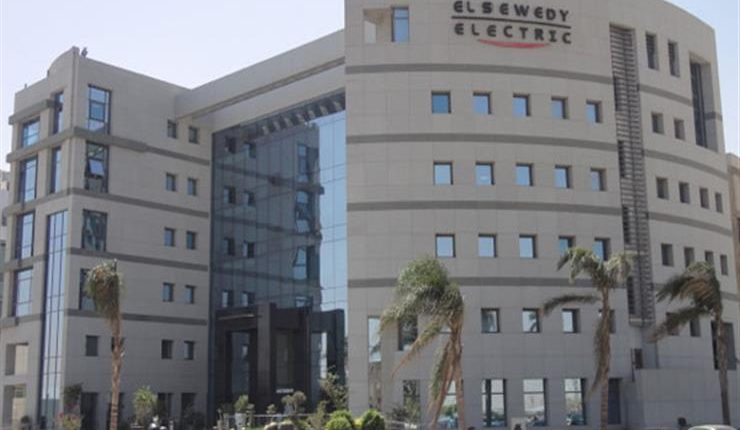 An official source at El Sewedy Electric Company said that his company aims to significantly expand the size of its business both locally and abroad in the coming period. The board of directors has set a promising investment plan that will reap the results of the company’s operations during the coming year, especially with the start of the Tanzanian dam project in 2020. In addition, the company has already started preparing for the project as it is about to receive credit facilities from Banque Misr worth $100m.

El Sewedy plans to set up a new company in the UAE or acquire an existing company operating in the free zone system. The new company will be a center for the commercial companies of the El Sewedy Group outside Egypt.

As part of the company’s expansion in the coming period, the board of directors approved a loan of €42m from the National Bank of Greece.

The source pointed out that the company’s volume of contracts of contracted projects amounted to EGP 64bn, which will be a strong incentive for the growth rates of the company during the coming period as domestic operations accounted for 91% of its revenues.

Meanwhile, the volume of contracts for the metres projects is worth €94m, along with $81m worth of projects in the transformers sector.

He added that the new partnership agreement with the Suez Canal Economic Zone (SCZone) to establish the SCZone Utilities will improve its contracts’ size in the coming period.

The new company will operate in the design, construction, management, operation, and maintenance of infrastructure projects of electricity, water, sanitation and gas, along with hard waste management.

The SCZone Utilities will set up a framework for projects in each sector and study each project individually, technically, and financially. It will also undertake all operations, maintenance, and management with its human resources for its project.

The consolidated financial statements of El Sewedy Electric showed a decline in profits for the first quarter (Q1) of this year by 30.4%, realising net profits of EGP 955.51m against EGP 1.431bn of net profits in the same period last year.

The company’s consolidated results showed a growth of 12% in Q1 of 2019, rising to EGP 11.2bn, but the rise in taxes and the cost of revenue prevented growth in net profits.

Commenting on the results, Ahmed Elsewedy, managing director of El Sewedy Electric, said that the growth in revenues during Q1 is due to the strong performance of most of the company’s operating segments, as well as the diversification and integration of the range of products and services which will be the starting point and revenue growth in the coming period.

He added that his administration is prioritising cost-cutting measures while expanding the geographical scope of the company’s business during the current year as a key factor in enhancing its ability to maximise shareholder return on investment.

Elsewedy said that the construction sector recorded an annual revenue growth of 33% due to the expansion efforts in this promising sector in the global arena, especially in the markets of Africa, the Gulf, and Asia.

He pointed out the importance of the alliance with Japanese Mitsubishi Hitachi and the contract they received in the United Arab Emirates worth $550m for the establishment of a power plant in the Emirate of Sharjah after giving he company its first contract worth $300m to establish a power plant in Dubai.

Furthermore, he praised the importance of the alliance with the Arab Contractors Company in the design, supply, and construction of a hydroelectric dam and power plant in Tanzania.

For its part, Naeem Securities’ research shows that El Sewedy’s results were disappointing due to low income from investment and financing. However, the results of the business remain neutral, so it is advised to hold the company’s share.

Naeem’s research also shows that the company still has strong growth opportunities in the future, especially if the Tanzania dam project is successfully implemented without exceeding costs to ensure good margins.

Naeem has set the target price for El Sewedy at EGP 17.16 per share.

He hypothesises the decline in the turnkey top-line, as being mainly reflective of lower execution rates of 6%, compared to 13%, reflective of lower execution rates of 6%, adding, “Based on our estimates, revenue recognition should improve as the company looks to ramp up projects by year-end, maintaining an average execution rate of 12%. Moreover, we also take into account revenue to be recognised from the Tanzania dam project, which should happen starting 2020; likely to provide a sizable boost to incomes, given the large size of the contract.”

Additionally, the researcher views the turnkey segment, in terms of exposure to the power generation sector in Egypt, as having reached maturity/saturation, as the country’s power grid capacity (projected to reach close to 57,000MW, including the 14,400MW generated from the three Siemens’ power plants) far exceeds local demand. Turnkey in sub-Saharan Africa, however, presents itself as a high-growth opportunity; however, with country risk always a major factor.

Naeem noted that the recent appreciation trend of the Egyptian pound, if continued, could present a downside risk for El Sewedy’s earnings, given the company’s sisable exposure to foreign currency sales.

Over and above, he noted that that the positive triggers are the New EPC project opportunities existing with regards to water treatment plants as Egypt intends to inject $5bn to establish 30 new plants (currently at 20 plants), in the wake of its expected limited water supply for the future (as a result of Ethiopia’s GERD) and faster settlement of receivables without sizable cuts such as impairments.

Meanwhile, Pharos Research recommended increasing the relative weight of El Sewedy Electric shares and set the fair value at EGP 18.94 per share, noting that looking at the future of the sector, the appreciation of the pound could hinder its growth and the company’s competitiveness.

The wire and cable sector accounted for the largest share of the company’s total revenues in Q1 of 2019, accounting for approximately 58% of total revenues compared to 61% in the comparable quarter of 2018.

Revenue from the metres sector accounted for 7.3% of total revenues for Q1 of 2019.

In Q1 of 2019, revenues from the wires and cables sector amounted to EGP 6.5bn, an annual increase of 7%. This growth is not a strong growth compared to other sectors, despite the fact that this sector accounted for the largest share of total revenues during the same period. At an annual growth rate of 33%, the revenues of contracting projects grew to EGP 3.2bn in Q1 of 2019. The revenues of the metres sector reached EGP 813.7m in the first three months of this year, which is an annual decline of 8%, while the revenues of the transformers sector grew by 7% to EGP 431.8m in the same period. The electric equipment sector was the fastest growing in Q1 of 2019, despite attaing the least revenues, growing by 52.6% on annual basis to EGP 258.9m.

On the independent business level, the company’s profits fell 58.5% to EGP 17.61m compared to a net profit of EGP 42.45m during the same period last year.

Noteworthy, the company achieved a profit of EGP 5.11bn in 2018, compared to profits of EGP 6.48bn in 2017, taking into account minority rights.