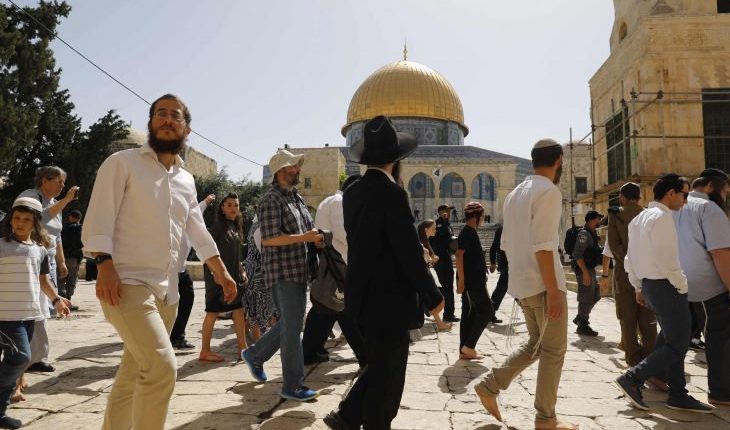 Israeli forces on Sunday used rubber bullets and sound bombs to disperse Palestinian worshippers at the Al-Aqsa Mosque compound, arresting at least two of them, according to the Jerusalem Islamic Waqf responsible for the site.

The doors of Al-Aqsa Mosque, which located in the Old City of Jerusalem, were closed by Israeli forces after clashes.

Israeli forces allowed about 100 Jewish visitors to enter the Al-Aqsa Mosque compound. They were waiting at Mughrabi Bridge which leads from the Western Wall Plaza to the Temple Mount.

On Twitter, Abu Zuhri wrote that using force and the aggression against worshippers was a dangerous escalation and violated the sanctity of holy Islamic sites. Furthermore, Abu Zuhri added that the international community is under a real test to take action against Israeli aggression.

Jews visited the site to mark Jerusalem Day, which is a national holiday in Israel.

Palestinians kept protesting against Israeli aggression, insisting their right in establishing an independent state with East of Jerusalem as its capital.

The status of Jerusalem has long been a point of contention between Palestinians and Israelis, as the Palestinian Authority demands East Jerusalem as a capital, as the part of a two-state solution, while Israel claims the whole city as its capital.

In a major shift, US President Donald Trump officially recognized Jerusalem as Israel’s capital and ordered moving his country’s embassy from Tel Aviv to the holy city, reversing nearly seven decades of US foreign policy.

The decision which sparked international condemnation was strongly opposed by the European Union and a wave of anger among Palestinians and Muslims around the world.

Since March last year, thousands of Palestinians have taken part in mass demonstrations demanding the right of return, lifting the blockade imposed by Israel after Hamas seized power of Gaza in 2007, and protesting the relocation of the US Embassy from Tel Aviv to Jerusalem, the holy city they consider the capital of their future independent state.