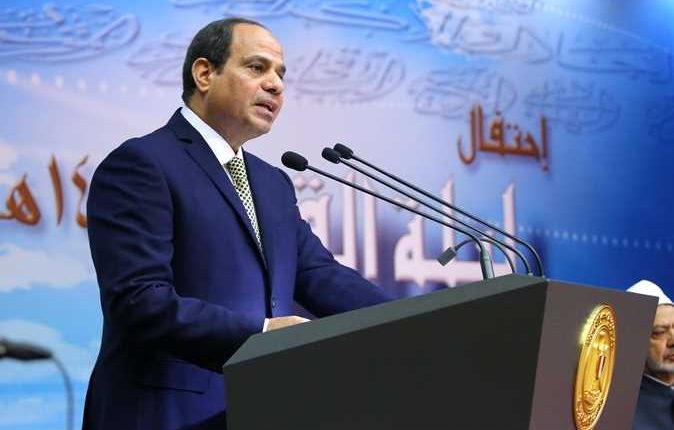 President Abdel Fattah Al-Sisi asserted that the main aim for religious discourse is to raise awareness among youth against the dangers of extremist thoughts.

He also praised the role of Al-Azhar’s moderate clerics in spreading tolerant Islamic discourse, asserting its role to defend Islam from “the image presented abroad.”

The speech was given in the celebration of Laylat Al-Qadr, which is considered the holiest night of the year for Muslims, and is traditionally celebrated on the 27th day of Ramadan.

President Sisi also encouraged the continued efforts by Al-Azhar in renewing religious discourse on both levels, the internal and external, and to emphasise the values of progress, tolerance, and acceptance of others, especially in this current stage, as the country is facing the unprecedented challenge of rapidly growing terrorism.

Furthermore, he also stressed the importance of spreading the teachings of peace and acceptance. He added that, when he previously mentioned the term “renewing religious discourse,” he aimed to revolutionise the performance of the religious institutions and the understating of texts. He told the preachers that they are not defending a religion but rather defending the divine.

Since being sworn-in as president, Al-Sisi has adopted the initiative calling for Islamic institutions in the country, including Al-Azhar, the ministry of religious endowments, and Dar Al-Ifta, to “renew religious discourse.”

Lately, Egypt has depended diplomatically on its three major Sunni Muslim institutions to reverse the spread of Islamic militancy. The country has also taken the stance on the need to support the state and the current government or by addressing radical opponents of the government, such as the so-called “takfiri” (apostate) elements.