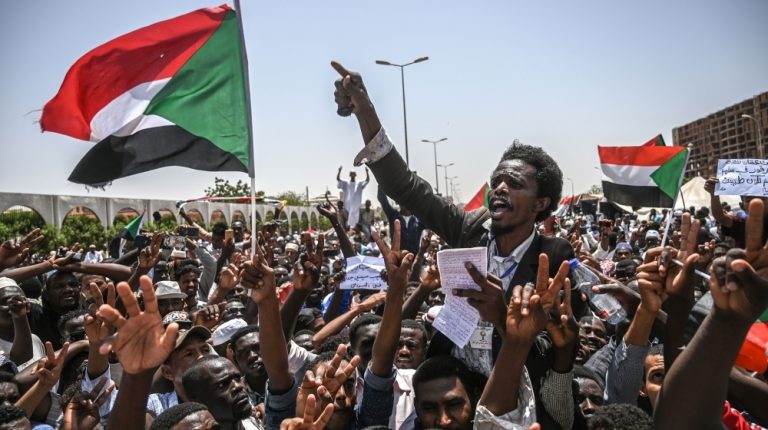 A Sudanese citizen was reportedly killed and 10 others were wounded late Saturday near the sit-in held outside the military headquarters in the Sudanese capital Khartoum, according to AFP.

The Sudanese Military Transitional Council has not commented on the reports yet. However, Sudan’s protest leaders accused the military leaders of trying to disperse their sit-in and “manoeuvre” to gain time for itself.

In a Saturday statement, the Declaration of Freedom and Change Forces declared that the security and military forces used excessive force and fire against civilians, calling on the council to withdraw its plans to disperse their peaceful sit-in and its scheme to fabricate chaos and insecurity in the country.

The alliance affirmed that “killing and terrorising” civilians are only a preparation to use live fire against protesters and civilians. It added that nothing has been implemented of the arrangements that the protesters and military generals agreed upon.

Meanwhile, the alliance noted that the military leaders only did what they thought of, which unfortunately wasonly confined to ignite violence.

The alliance also affirmed their commitment to peaceful protests and their hopes to establish a civilian and democratic government.

Last Tuesday and Wednesday, on 28-29 May, the alliance went into a two-day strike to protest the military practices and to achieve the aspirations and the demands of the Sudanese revolution.

Protests have continued as negotiations between military leaders and protesters were suspended. Last week, women heavily took part in demonstrations demanding the military council to hand over power to a civilian-led government.

Last week, General Abdul Fattah Burhan, the head of the Sudanese Military Transitional Council made two visits to Egypt and the UAE. Both countries, as well as Saudi Arabia, voiced support of Burhan after he seized power last month, following the toppling of former President Omar Al-Bashir.

During his visits, Burhan met Egyptian President Abdel Fattah Al-Sisi and the Crown Prince of Abu Dhabi, Mohammed bin Zayed Al-Nahyan. He reviewed separately with them the recent updates on the negotiations with protest leaders and other updates inside Sudan.

Both leaders of Egypt and the UAE asserted that dialogue is important during this critical moment to reach the demands of the Sudanese people and achieve their aspirations as well as maintain the security and stability of Sudan. Earlier, the UAE vowed to coordinate with Sudan on needed aids, such as food, medications, and oil. Both the UAE and Saudi Arabia declared that they will provide Khartoum with $3bn in aid.

Over months, Sudanese people from a wide spectrum of society swept into the streets in large numbers to initially protest against the high increase in the cost of living. Then, they demanded the toppling of Al-Bashir and his regime, who have been in power since 1989.